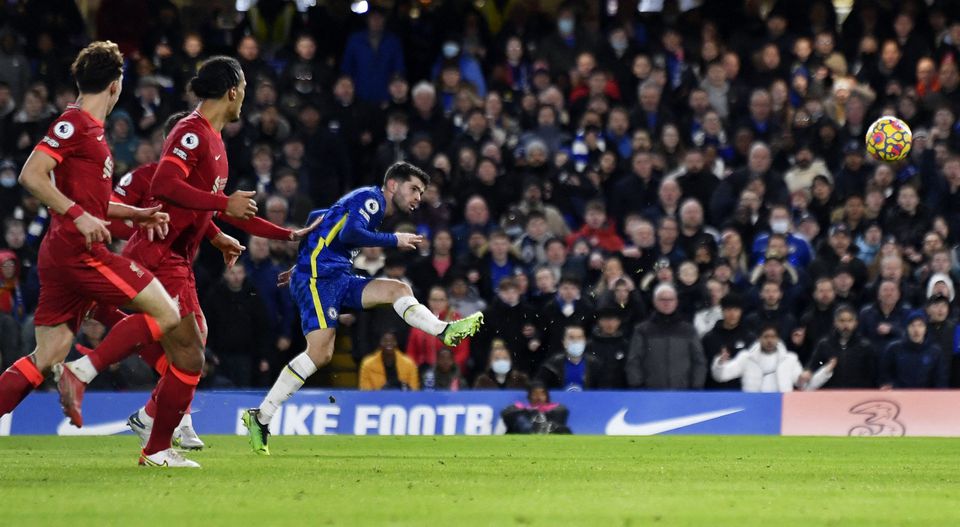 Leaders Manchester City were the beneficiaries as Chelsea and Liverpool shared the spoils in a thrilling 2-2 Premier League draw on Sunday, while Leeds United pulled eight points clear of the relegation zone with a 3-1 win over Burnley, Reuters reported.

City’s last-gasp 2-1 win at Arsenal on New Year’s Day had moved the reigning champions 11 points clear of Chelsea in second and 12 in front of third-placed Liverpool ahead of the latter pair’s meeting at Stamford Bridge.

Despite Liverpool’s coach Juergen Klopp, goalkeeper Alisson, Roberto Firmino and Joel Matip all missing the match having tested positive for COVID-19, the Reds looked set to close the gap on City to nine points after racing into a 2-0 lead.

Sadio Mane and Mohamed Salah put Liverpool in command inside 26 minutes with Chelsea, who left Belgium striker Romelu Lukaku out of their matchday squad following an interview in which he was critical of coach Thomas Tuchel’s tactics, all at sea.

However, a stunning strike from Mateo Kovacic and Christian Pulisic’s powerful finish brought Chelsea level before halftime, with both sides then having chances to win a pulsating clash.

The two title chasers had to settle for a point, however, with City the real winners as they stand 10 point clear and remain firm favourites to retain their Premier League crown.

“It is a big gap (at the top),” Liverpool defender Virgil van Dijk told Sky Sports. “They (City) have the title maybe to lose at the moment but anything can happen still. We have been there and gave it away, so anything is possible.

“We focus on ourselves, we just have to get results, play good football and win games.”

Leeds’ first victory in five league games came at a crucial time, with confidence at the Yorkshire club low after they had conceded 14 goals in three successive league defeats prior to Burnley’s visit.

Leeds had not played since Dec. 18 due to coronavirus-related postponements and that additional break allowed them to get some much-needed key players back from injury.

The refreshed hosts dominated the first half and led 1-0 going into the break through Jack Harrison before Burnley substitute Maxwel Cornet pegged the hosts back nine minutes into the second half.

Stuart Dallas picked the perfect time to score his first of the season 13 minutes from time, with Daniel James’ second since signing from Manchester United in the close season making sure of the crucial win, leaving Burnley stuck in the bottom three.

“I don’t ignore the situation we are in,” Leeds coach Marcelo Bielsa said. “Every week you have to prove yourself.

“Even if the performance today was a step forward, we need to maintain that level against any opponent. We showed a lot of commitment today.”Things have not gone to plan for Everton coach Benitez since the former Liverpool manager returned to Merseyside to succeed Carlo Ancelotti in June, with Brighton twisting the knife further on Sunday.

Two goals from Alexis Mac Allister either side of a Dan Burn strike earned Brighton the victory at Goodison Park that continued their fine season as they climbed to eighth on 27 points from 19 matches.

The result lifted Brentford to 12th spot on 23 points from 19 games, a point and a place ahead of Villa.