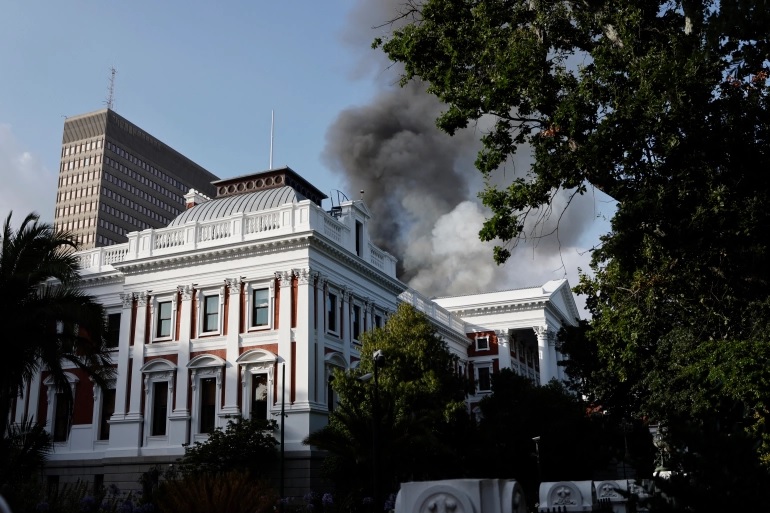 A major fire erupted at the South African parliament building in Cape Town, with flames bursting from the roof of a building and a plume of smoke that could be seen from miles away, Aljazeera reported.

Firefighters arrived at the building a few minutes after receiving the initial call at 06:12 local time (04:12 GMT) on Sunday, the City Fire Services said, as large flames and a huge column of smoke engulfed parts of the compound.

Mapisa-Nqakula said the fire will not prevent the State of the Nation Address from going ahead in February.

Minister of Public Works and Infrastructure Patricia De Lille told the press conference that the National Assembly was still burning.

“We have not been able to contain the fire in the national assembly chambers. Part of the ceilings have collapsed,” she said.

The precinct has three main sections, the original Parliament building completed in the late 1800s and two newer parts built in the 20th century. Historical artefacts inside the premises are likely to have been damaged or destroyed.

The fire initially was concentrated at the old Parliament building, which is located behind the National Assembly, De Lille told reporters. She had initially said firefighters had the situation under control, but the fire later spread and tore through the current Parliament building.

De Lille cautioned against speculations on the causes of the fire until investigations are concluded.

Cape Town’s mayoral committee member for safety and security Jean-Pierre Smith said fire had also gutted the third floor of the Old Assembly building and that the roof had collapsed.

“Fire is not under control and cracks in the walls of the building have been reported. The damage will be significant, especially if it’s not contained soon,” he warned.

Smith added that firefighters were still battling to bring the blaze under control and that two aircrafts had been deployed.

No injuries have been reported in the fire, which was spotted by security guards. Parliament was closed for the holidays at the time of the incident.

President Cyril Ramaphosa and many of South Africa’s high-ranking politicians were in Cape Town for the funeral service of Archbishop Desmond Tutu, which took place on Saturday at the city’s St. George’s Cathedral, about a block away from the Parliament precinct.

Ramaphosa arrived at the parliament around 1:30 pm on Sunday accompanied by Premier Alan Winde and Public Works Minister Patricia De Lille to view the damages.

Several hours after the blaze started, thick smoke was still pouring from one of the several buildings that make up the parliament complex.

News24 reported that 36 firefighters were initially sent to the scene and authorities later called for additional resources.

Jermaine Carelse, from the City of Cape Town fire services department, said 70 firefighters were on the ground trying to contain the blaze.

“They are still battling. Active firefighting is still taking place,” he said.

Police cordoned off the complex and closed roads. Some of the blocked-off areas were near where people had left flowers and other tributes to Tutu.

Member of parliament Steve Swart called the fire “tragic” and told reporters at the scene that MPs will continue their work remotely.

MP Samantha Graham, who sits in the Portfolio Committee on Public Works,  has raised concerns that the fire at the Parliamentary buildings could have been prevented.

According to Graham, an external report by auditing company BDO had highlighted the fire hazard.

“The minister refused to give us the report but handed it to the Speaker of Parliament. If the fire is as a result of one or more of the risks indicated in the report, then the Minister and the Speaker are complicit,” Graham was quoted by News24 as saying.

Speaker Mapisa-Nqakula has dismissed the allegations, saying the recommendations had been implemented.

The report was the result of an inquiry into a previous fire on March 17, 2021, at the Parliament’s Old Assembly building, which affected several areas including the upper floor offices and committee rooms.

The Parliament’s Presiding Officers said investigations are underway to establish the causes of the blaze.