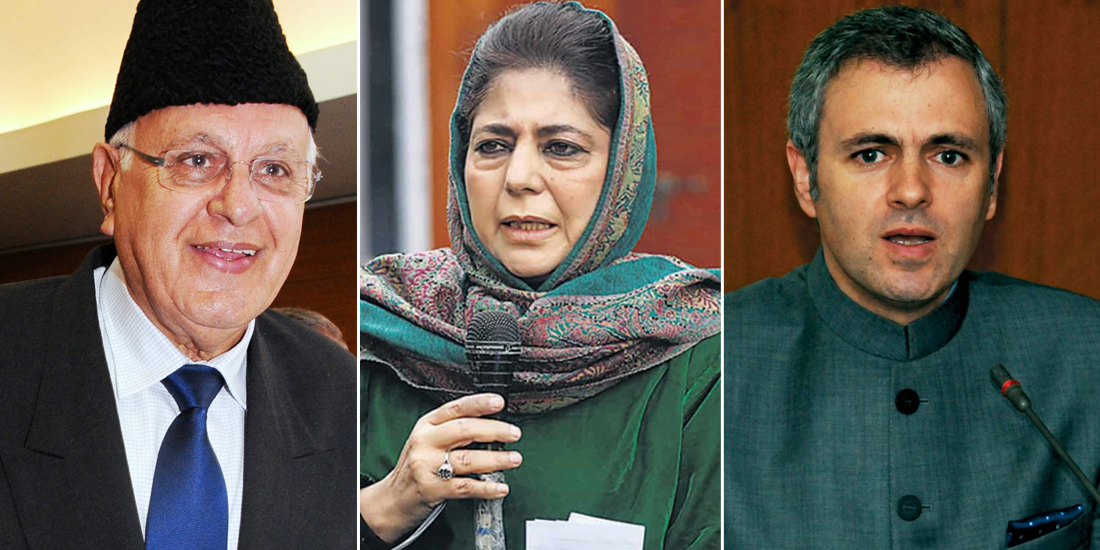 Leaders of the Peoples’ Alliance for Gupkar Declaration (PAGD) including former chief ministers Omar Abdullah and Mehbooba Mufti were placed under house arrest ahead of the grouping’s planned sit-in protest against the draft proposal of Delimitation Commission, leaders of the five-party alliance said on Saturday, Hindustan  Times reported.

Omar Abdullah said the move was an attempt to scuttle the peaceful protest planned by them. Later, he and Mehbooba Mufti tweeted videos of protests that their party leaders still managed to organise.

“Some things never change,” the National Conference (NC) vice president said on Twitter on Saturday morning along with photographs of the police presence outside his house.

“Good morning & welcome to 2022. A new year with the same J&K police illegally locking people in their homes & an administration so terrified of normal democratic activity. Trucks parked outside our gates to scuttle the peaceful @JKPAGD sit-in protest. Some things never change,” Abdullah said in a tweet.

Good morning & welcome to 2022. A new year with the same J&K police illegally locking people in their homes & an administration so terrified of normal democratic activity. Trucks parked outside our gates to scuttle the peaceful @JKPAGD sit-in protest. Some things never change. pic.twitter.com/OeSNwAOVkp

“Talk about a lawless police state, the police have even locked the internal gate connecting my father’s home to my sister’s. Yet our leaders have the cheek to tell the world that India is the largest democracy, hah!!”

“GOI trumpets scrapping Article 370 & dismembering J&K throughout the country but is deeply paranoid and intolerant when people of J&K want to protest against its disempowerment. For the umpteenth time, we’ve been placed under house arrest for trying to organise a peaceful protest,” Peoples’ Democratic Party (PDP) president Mehbooba Mufti said in a tweet.

The PAGD leadership last month rejected the draft proposal of the Delimitation Commission, that seeks to increase the total number of Jammu and Kashmir assembly seats from 83 to 90, with 43 in the Jammu region and 47 in Kashmir. In the current assembly, Jammu has 37 members and Kashmir has 46.

The amalgam has called the proposal an act to ‘divide people on the basis of religion and groups’.

On December 21, the PAGD held a meeting under the chairmanship of NC chief Farooq Abdullah and expressed their deep dissatisfaction and shock with regard to recommendations of the commission. The meeting was attended by PDP president Mehbooba Mufti, CPI (M) general secretary Mohammad Yusuf Tarigami, Awami National Conference vice-president Muzuffar Shah and other political leaders of alliance constituents.

On Saturday, Mehbooba Mufti said she has been put under house arrest and lambasted the government of India for stopping people to protest ‘disempowerment’ of J&K.

PAGD is the alliance of mainstream parties including National Conference, PDP, Communist Party of India-M, J&K Awami National Conference and others which came together to fight for the restoration of region’s special status which was revoked on August 5,2019 and the region split into two union territories.

National Conference vice president Omar Abdullah said that the administration was ‘terrified’ of normal democratic activity in J&K and said that police have even locked gates of the homes of his family members.

PAGD spokesperson Muhammad Yousuf Tarigami told a local news agency that the gate of his quarter has been locked by the police. “The intentions are very clear. The Government of India by using the Delimitation Commission wants to dis-empower us,” he said.

“It is new year and the message is loud and clear that there are no rights for the people of Kashmir even to protest. We have been put under house arrest and workers have been reportedly put in police stations, “ he said.

“It is how their louder claims of building ‘New Kashmir’ get exposed. Not allowing us to hold a peaceful protest and express our legitimate concerns, this is how they want to run Kashmir, “ he said.

The Delimitation Commission for the UT was formed by the union government on March 06, 2020, just six months after special status of J&K under Article 370 was revoked and the region split into two union territories – J&K with a legislative assembly and Ladakh without one. Earlier the delimitation of the constituencies in J&K was scheduled to be held in 2026. However following the central government’s changes in J&K after August 5, 2019, the J&K Reorganization Act increased the number of voting constituencies for J&K to 90.