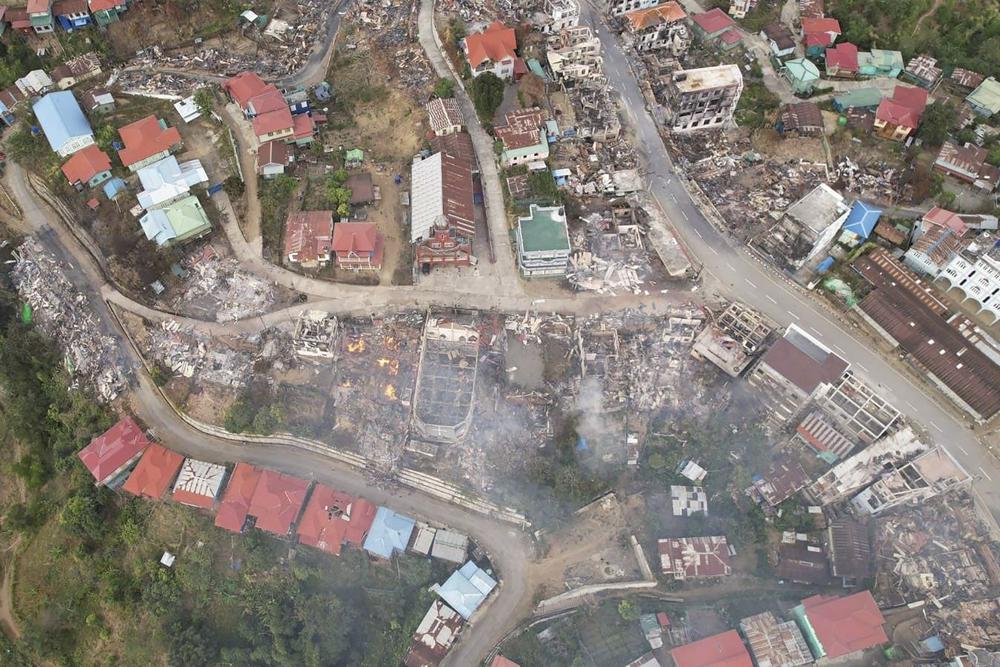 When the young farmhand returned to his village in Myanmar, he found the still smoldering corpses in a circle in a burned-out hut, some with their limbs tied, Associated Press reported.

The Myanmar military had stormed Done Taw at 11 a.m. on Dec. 7, he told the AP, with about 50 soldiers hunting people on foot. The farmhand and other villagers fled to the forest and fields, but 10 were captured and killed, including five teenagers, with one only 14, he said. A photo taken by his friend shows the charred remains of a victim lying face down, holding his head up, suggesting he was burned alive.

“I am very upset, it is unacceptable,” said the 19-year-old, who like others interviewed by the AP asked to remain anonymous for fear of reprisal.

The carnage at Done Taw is just one of the most recent signs that the Myanmar military is reverting to a strategy of massacres as a weapon of war, according to an AP investigation based on interviews with 40 witnesses, social media, satellite imagery and data on deaths.

The massacres and scorched-earth tactics — such as the razing of entire villages — represent the latest escalation in the military’s violence against both civilians and the growing opposition. Since the military seized power in February, it has cracked down ever more brutally, abducting young men and boys, killing health care workers and torturing prisoners.

The massacres and burnings also signal a return to practices that the military has long used against ethnic minorities such as the Muslim Rohingya, thousands of whom were killed in 2017. The military is now accused of killing at least 35 civilians on Christmas Eve in Mo So village in an eastern region home to the Karenni minority. A witness told the AP that many of the bodies of the men, women and children were burned beyond recognition.

But this time, the military is also using the same methods against people and villages of its own Buddhist Bamar ethnic majority. The focus of most of the latest killings has been in the northwest, including in a Bamar heartland where support for the opposition is strong.

More than 80 people have died in killings of three or more in the Sagaing region alone since August, according to data from the Assistance Association for Political Prisoners, or AAPP, a group that monitors verified arrests and deaths in Myanmar. These include the deaths of those in Done Taw, five people in Gaung Kwal village on Dec. 12 and nine in Kalay township on Dec. 23, part of a trend that has made Sagaing the deadliest region in Myanmar.

The military is also reprising a hallmark tactic of destroying entire villages where there may be support for the opposition. Satellite imagery the AP obtained from Maxar Technologies shows that more than 580 buildings have been burned in the northwestern town of Thantlang alone since September.

The violence appears to be a response to the local resistance forces springing up across the country, but the military is wiping out civilians in the process. In Done Taw, for example, the military moved in after a convoy hit a roadside bomb nearby, but the people killed were not part of any resistance, another villager told the AP.

“They were just normal workers on the betel-leaf plantation,” the 48-year-old welder said. “They hid because they were afraid.”

For the investigation, the AP spoke to dozens of witnesses, family members, a military commander who deserted, human rights groups and officials, along with analyzing data on deaths from the AAPP. The AP also reviewed satellite imagery and dozens of images and videos, with experts checking them against known locations and events.

The numbers likely fall far short of actual killings because they tend to happen in remote locations, and the military suppresses information on them by curtailing Internet access and checking cell phones.

“There are similar cases taking place across the country at this point, especially in the northwest of Myanmar,” Kyaw Moe Tun, who refused to leave his position as Myanmar’s United Nations envoy after the military seized power, told the AP. “Look at the pattern, look at the way it’s happened….it is systematic and widespread.”

The military, known as the Tatmadaw, did not respond to several requests by phone and by email for comment. Three days after the Done Taw attack, the state-run Global New Light of Myanmar newspaper dismissed reports of the slayings as “fake news,” accusing unidentified countries of “wishing to disintegrate Myanmar” by inciting bloodshed.

“The nature of how brazen this attack was is really indicative of the scale of violence we can expect in the coming months, and particularly next year,” said Manny Maung, a researcher for Human Rights Watch.

Just in the week of the Done Taw massacre, the military killed 20 more people in Sagaing, the AP analysis shows. And on Dec. 17, soldiers killed nine people, including a child, in Gantgaw township in the neighboring region of Magway, a witness told the AP, confirming AAPP data. Troops brought in by helicopter occupied the village for two days, and those who fled returned to find, identify and cremate rotting bodies, the witness said.

The movement of troops suggests that violence in the northwest is likely to pick up. Two military convoys of more than 80 trucks each with troops and supplies from Sagaing have made it to neighboring Chin state, according to an opposition group. And a former military captain told the AP that soldiers in Chin State were resupplied and reinforced in October, and the army is now stockpiling munition, fuel and rations in Sagaing.

The captain, who goes by the nom de guerre Zin Yaw, or Seagull, is a 20-year military veteran who deserted in March and now trains opposition forces. He said he continues to receive updates from friends still in the military and has access to defense documents, several of which he shared with the AP as proof of his access. His identity was also verified by an organization of military deserters.

The Tatmadaw overthrew the enormously popular Aung San Suu Kyi in February, claiming massive fraud in the 2020 democratic election that saw her party win in a landslide. Since then, the military and police have killed more than 1,375 people and arrested more than 11,200, according to the AAPP.

One of the earliest mass killings took place on March 14 in the township of Hlaing Tharyar in Yangon, the biggest city in Myanmar, according to a report this month from Human Rights Watch. Witnesses said that security forces fired on protesters with military assault rifles and killed at least 65, including bystanders.

As the military’s tactics have turned increasingly brutal, civilians have fought back. Opposition started with a national civil disobedience movement and protests, but has grown increasingly violent with attacks on troops and government facilities.

In May, the opposition National Unity Government announced a new military wing, the People’s Defense Force, and in September declared a “defensive war.” Loose-knit guerrilla groups calling themselves PDF have since emerged across the country, with varying degrees of allegiance to the NUG.

An early example of the military unleashing its battle-tested tactics on majority Buddhist areas came just 23 miles up the river from Done Taw in Kani township. In July, images circulated of massacres in four small villages that Myanmar’s ambassador to the United Nations called “crimes against humanity.” Four witnesses told the AP that soldiers killed 43 people in four incidents and discarded their bodies in the jungle.

On July 9, soldiers in trucks rolled into Yin village in Kani, launching an attack that would leave 16 dead, according to three witness accounts. The soldiers started shooting and sent people fleeing. Troops surrounded a group in the nearby jungle, said one woman who was captured with her brother.

She was set free, but would never see her brother alive again. When she returned with others three days later, they discovered his body on the forest floor, already rotting in the heat and showing signs of torture.

“We all live in fear,” said the woman, who like the other villagers asked to remain anonymous for safety. “We are worried that they might come back during the night.”

One 42-year-old man said a search party of 50 villagers found three separate clusters of bodies. Some appeared to have been dragged to death along rocky ground with ropes or with their own clothes. The bodies had been pillaged for gold.

“There were some fleshly remains and the odor was so foul,” the villager said. “We couldn’t even get close because of the smell.”

The village is now terrorized into silence, he said, listening for the next attack with their bags packed and the normal rhythms of life frozen in fear.

Another Kani resident told the AP that when soldiers approached his village of Zee Pin Twin on July 26, he fled into the jungle. He returned to find his home broken and blackened by fire. Precious goods were stolen, and important documents, food, and other belongings like wedding photos lay in a smoldering heap.

Two days later, villagers with search dogs found 12 bodies, some buried in shallow pits in the jungle. A villager told the AP that they saw bruises and other signs of torture on the corpses, and that one man’s hands were tied with military boot laces and his mouth gagged.

The descriptions match photographs and videos of burned and brutalized bodies given to the Myanmar Witness monitoring group.

“When there’s image and videos (in) three separate events…it’s very hard to deny,” said Benjamin Strick, head of investigations for the Britain and Thailand-based group.

The AP could not independently verify the grisly images, but they also match incident reports collected by the AAPP. John Quinley, a human rights specialist with Fortify Rights, said the group believes the violence in Kani and in Sagaing is a “direct result” of PDF operations there.

“The Myanmar junta’s strategy is to try to create an environment of terror and try to silence civilians and also try to drive out the PDF,” Quinley said.