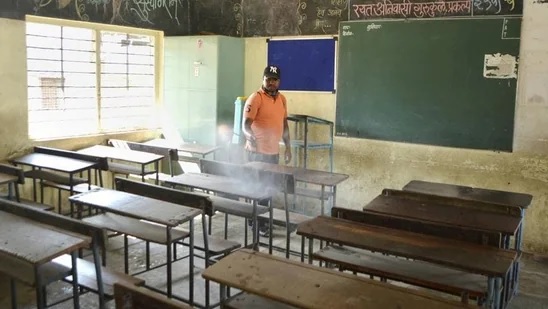 Schools, colleges and training and coaching institutions in the national capital will remain closed as the DDMA has declared a “yellow alert” amid a spike in COVID-19 cases following the emergence of the virus’ Omicron variant, Hindustan Times reported.

The Directorate of Education (DoE) clarified that online teaching learning, examinations and related activities such as practicals, projects and assignments for classes 9 to 12 would be conducted according to schedule.

The alert, which comes under the Graded Response Action Plan (GRAP), follows the national capital’s biggest single-day spike in COVID-19 infections in over six months on Monday when 331 new cases were reported with a positivity rate of 0.67 per cent.

The GRAP had been approved by the DDMA in July, in anticipation of a third wave of COVID-19 in Delhi. The plan gives a clearer picture of imposition and lifting of restrictions according to the situation.

Under the “yellow alert”, school, colleges, training and coaching institutions as well as libraries are supposed to be closed.

Schools were allowed to reopen from December 18 for students above class 6, after being closed in view of alarming pollution levels in Delhi. The government had then announced that physical classes for students up to class five can begin from December 27.

“We have all witnessed the total failure of planning and execution from the government this year. Schools constantly closing and reopening has had an undeniably deteriorating effect on students’ mental health,” Gautam said.

“The expected high pollution levels and the schools closing again for the nth time could have been dealt in a better planned manner. There is always a fear of uncertainty in minds of our students,” the DPA president said.

The government should have been “prudent” in its approach to decisions and not just making them in “haste” without any concern for the future, Gautam said

President of the All India Parents Association (AIPA) Ashok Agarwal said schools have been closed “without any justification or scientific basis”.

“One can understand taking precautions but closing schools and colleges is no solution. In neighbouring states, schools are open, then what is special in Delhi to close schools,” he said.

Schools and colleges have faced frequent closures due to the Covid pandemic since March last year ahead of a nationwide lockdown in view of coronavirus.

Principal of a top private school, who did not wish to be identified, said, “There is absolutely no plan as to how these extremely widening learning gaps will be filled if this continues for long.” “Health cannot be compromised but its high time we start working on a long-term plan which is workable,” the principal said.

Tanya Agarwal, a lawyer and a parent of a Class I student, who has been vocal about long term negative effect of school closures, tweeted, “Clearly Delhi government doesn’t care about kids and don’t care about COVID. Because they have once again decided to keep bars and restaurants open, but close schools. Shameful”.

Besides school and colleges, according to the set of restrictions under the alert, cinemas and gyms have been also closed.

It also puts various restrictions on functioning of shops and public transport like establishments of non-essential goods and services and malls will open based on odd-even formula from 10 AM to 8 PM, while the Delhi Metro will run at 50 per cent of its seating capacity.