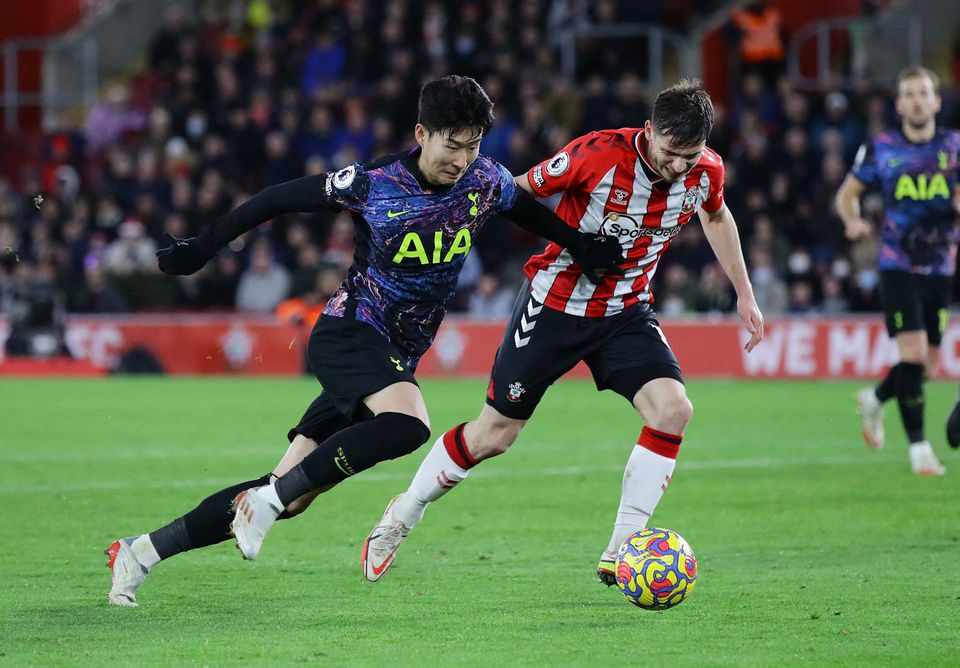 Ten-man Southampton held on for a 1-1 Premier League draw against Tottenham Hotspur at St Mary’s on Tuesday, as Antonio Conte became the first manager to go unbeaten in his first seven league games in charge of Spurs, Reuters reported.

James Ward-Prowse gave Saints a deserved lead midway through the first half with a swerving strike, but the momentum swung in the visitors’ favour when Mohammed Salisu tripped Heung-min Son to concede a penalty and pick up a second yellow before the break.

Harry Kane dispatched the spot kick, but the England captain had a expertly-taken second ruled out by VAR for a narrow offside in the second half and Conte’s side couldn’t find a way past goalkeeper Fraser Forster.

“It feels like a defeat. We’re not happy. To play against 10 men for the majority of the game and not come away with a win is very disappointing,” Spurs midfielder Harry Winks told Amazon Prime.

“I think we rushed it at times and tried to score too early and too quickly… we need to learn to be more patient with the ball.”

West Ham’s 4-1 win at Watford meant that Tottenham dropped to sixth on 30 points, one point behind the Hammers and five behind fourth-placed Arsenal, but with two games in hand over both.

Southampton are 13th with 21 points.

“We wanted to play an aggressive style of play and Sali is an aggressive player. We had to make sure we stuck in,” Ward-Prowse said.

“It’s not easy with a lot of games but we need to get as many points as we can.”

Conte has overseen an impressive upturn in form since joining Spurs, but recent fixture postponements meant the trip to the south coast was his side’s first league away game in 51 days.

The hosts started the brighter and broke through when a long throw-in was nodded into the path of Ward-Prowse, whose shot bent into the far corner for his third goal in as many games.

But Saints’ good work came undone when Salisu clumsily tripped Son in the box to earn his second booking in 12 minutes, handing Kane the chance to bury his third goal in three league games from the spot.

Kane looked to have turned the game on its head when he met a long Winks pass and fired a shot into the bottom corner, but a VAR review ruled that he was offside by a hair’s breadth.

Forster’s blushes were spared by the referee when he dropped a cross onto his foot, the ball ending up in his own net, but the whistle had already gone for a foul on the keeper.

Spurs piled forward in search of a winner but Forster stood strong, spreading himself well to deny Matt Doherty before beating away an array of late efforts.

Saints substitute Armando Broja threatened a stunning late winner but was denied by a last-gasp Davinson Sanchez block, before Kane headed into the side-netting in stoppage time to leave Conte with four wins and three draws from his first seven league games.