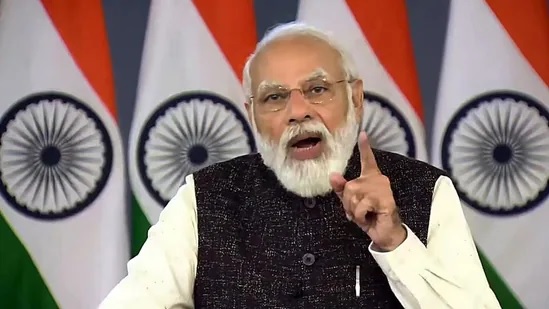 From January next year, India will begin delivering the first coronavirus vaccine doses to children of ages 15 and above and booster doses to health care and frontline workers and people above the age of 60 with certain health conditions, Prime Minister Narendra Modi announced on Saturday, Hindustan Times reported.

The move comes amid calls from experts to expand the vaccine drive, especially booster doses, to fight new variants such as Omicron, which has shown a substantial drop in vaccine efficacy against symptomatic disease.

In a televised address late in the evening, the Prime Minister outlined the preparations the government has made to tackle any surges before he announced the three decisions. “For children who are between the ages of 15 years and 18 years, vaccinations will now start in the country. In 2022, it will be launched on January 3,” he said in his address to the nation.

“We all have experience that those who are Corona warriors, health care and frontline workers, they have a huge contribution in keeping the country safe in this fight… Therefore, from the point of view of precaution, the government has decided that a ‘precaution dose’ of vaccine will also be started for health care and frontline workers,” the PM said.

He said citizens above 60 years of age and with comorbidities will also have the option of “precaution dose” of the vaccine on the advice of their doctors.

What the Prime Minister referred to as “precaution doses” are what has commonly been called boosters, which several countries have rolled out since mid-September.

Boosters for health care and frontline workers will open on January 3, and for people aged 60 and above with certain health conditions that put them at a higher risk of severe Covid-19 disease will start on January 10, the PM said.

In the context of children, the Drugs Controller General of India (DCGI) on Saturday approved the use of Bharat Biotech’s Covaxin in children aged 12 and above. A second vaccine, too, has been approved by the drugs regulator for use in ages 12 and above – ZyCoV-D, a dose made by Gujarat-based Zydus Cadila. ZyCoV-D is yet to be included in the immunisation programme.

“This decision, apart from strengthening India’s fight against Corona, will also help reduce the concern of school and college goers and their parents,” the Prime Minister said. “India needs to be vigilant about the spread of the coronavirus,” Modi said, adding that people should not pay attention to rumours nor panic about rising infection numbers.

“In our country, a nasal vaccine and the world’s first DNA vaccine will also start soon,” Modi said, adding that “since the beginning, India’s fight against Corona has been based on scientific principles, scientific opinions and scientific patterns.”

“We are in the last week of 2021. 2022 is set to arrive. We need to be cautious during the festive period. Infections are rising across several nations due to a new variant of Covid, Omicron. In India, there have been a few cases as well. I would urge all of you not to panic, be careful and alert,” he said.

“Today, the nation has 18 lakh isolation beds, 5 lakh oxygen supported beds, 1.4 lakh ICU beds and 90,000 special beds for kids. Today, we have over 3,000 functional PSA Oxygen plants and 4 lakh cylinders have been provided to all states,” PM Modi added.

The issue has been fraught with difficult considerations, since many parts of the world have had limited access, and many people still have not taken their primary course. The World Health Organization, in an interim technical advice shared on December 22, signalled relenting on its stand against booster doses to suggest an approach “firmly evidence-driven and targeted to the population groups at highest risk of serious disease and those necessary to protect the health system”.

The need to accelerate vaccine coverage (including booster doses) has been underscored by the rapid spread of the Omicron variant in several countries, where scientists have also found it to be significantly resistant to immunity created by vaccines or a past infection.

In the case of some vaccines, such as the AstraZeneca dose (produced and used in India as Covishield), the vaccine efficacy against symptomatic disease has dropped to near-zero when infections have been with Omicron, prompting health experts as well as government leadership in countries such as the US and UK to appeal to people to take their booster shots.

To be sure, studies have also shown that the variant is significantly less likely to lead to hospitalisation, partly because vaccine efficacy in preventing serious illness has been more durable.

The opening up of the drive comes at a time when the country appears to have ample amount of doses at hand.

According to the government’s daily update on vaccine stock availability, 17,74,97,506 doses of coronavirus vaccines were available with states or were in the pipeline, the health ministry said on Saturday.

“Protection of persons at high risk of severe disease or high viral exposure is a high priority. The decision is timely. Including of the 15-18 year age is also appropriate if supplies and vaccination teams are available to meet the needs of the expanded vaccination programme,” said Dr K Srinath Reddy, senior public health expert and founder, Public Health Foundation of India.

Gagandeep Kang, a senior vaccine expert and senior faculty, Christian Medical College, Vellore, said: “It is bound to have some benefit, how much I don’t know since I don’t know what the data is on severe disease in the groups now targeted.”

Paediatricians also said the decision was timely. “A timely decision to open vaccines for children above 15..High school students have board exams and entrance exams to take so they rightfully be the first group of children to get vaccinated,” said Dr Anupam Sibal, senior paediatrician and group medical director, Apollo Hospitals.