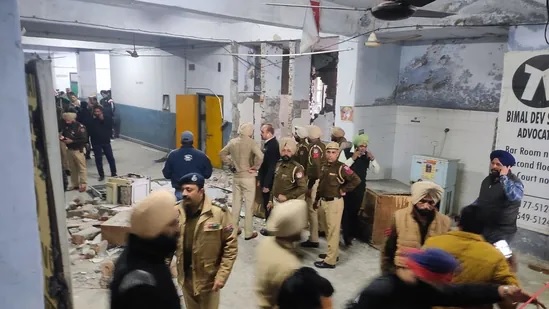 At least one man was killed in an explosion reported from a district court complex of Ludhiana, located near the police commissionerate office, while five were injured, Hindustan Times reported. The explosion took place in the washroom on the second floor at around 12.22pm. The second floor of the building houses eight courtrooms, but not many people were present on Thursday because of a strike by a section of lawyers. The area has been cordoned off by the police and the court premises is being vacated. One of the injured has been identified as advocate RS Mand.

According to reports, the lawyers were on a strike and that’s why the number of lawyers present on the premises on Thursday was fewer than any other day. It is not yet known whether the blast was from any cylinder as the second floor also houses the canteen of the court. But as the explosion took place inside the washroom, a cylinder blast might not have been the case.

Ludhiana police commissioner Gurpreet Singh Bhullar said the situation inside the court complex is now under control and there is no need to panic. “An explosion was heard near the record room on the second floor of the Ludhiana Court complex. One person died, two persons were injured in the incident. Bomb disposal team and forensics team have been called from Chandigarh for investigation,” the police commissioner said to ANI.

Chief minister Charanjit Singh Channi said he will be going to Ludhiana. “I am going to Ludhiana. Some anti-national elements are doing such acts as Assembly elections are nearing. The government is on alert. Those found guilty will not be spared,” he said.

All government offices will be thoroughly checked now in a security overhaul following the district court explosion.

The incident comes close on the heels of the sacrilege incidents that rocked the poll-bound state. A UP man was lynched on Saturday after an alleged attempt to commit sacrilege inside the sanctum sanctorum of the Golden Temple. The man reportedly jumped the golden grills inside the sanctum sanctorum and picked a sword and reached the place where a Sikh priest was reciting the holy Guru Granth Sahib.

The blast raises questions over the security of the government buildings amid continuous reports of drones dropping weapons in Punjab.