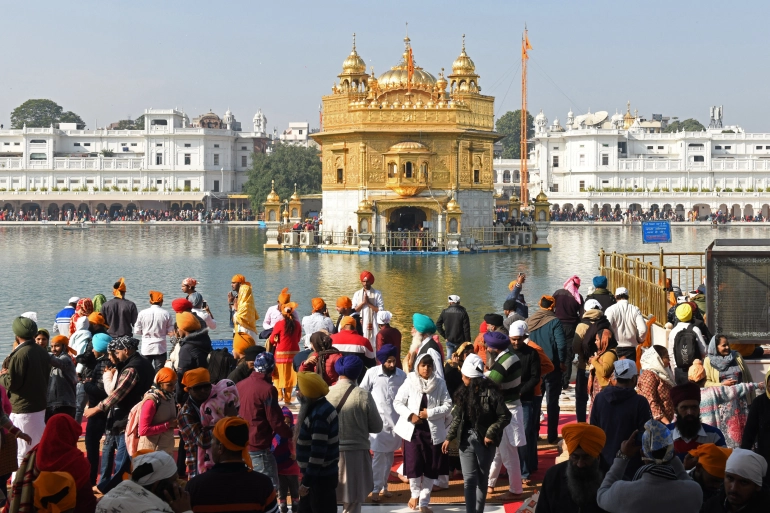 A man has been beaten to death at one of Sikhism’s holiest shrines in India after he allegedly attempted to commit a sacrilegious act by trespassing into an inner shrine, according to local media reports, Aljazeera reported.

Police said the incident took place on Saturday at about 17:45 local time (11:45 GMT) and was captured on camera as evening prayers at the Golden Temple in Amritsar were being broadcast on television.

Footage showed the man jumping over the rail and into the temple’s central enclosure, where the holy book Guru Granth Sahib is kept, and picking up a sacred diamond-encrusted sword.

Deputy commissioner of Amritsar police Parminder Singh Bhandal said he was apprehended by the Shiromani Gurdwara Parbandhak Committee (SGPC) staff members deployed in the shrine complex and led to the main administration’s office.

“While the employees were taking him to the office, some of the other devotees present in the shrine beat him up so much that he died upon reaching the office,” Bhandal said, according to the Hindustan Times.

Protests broke out outside the SGPC head office after the broadcast as people demanded that the man be handed to them.

His identity remains unknown but he is believed to be in his early 20s, according to a police review of security camera footage. A post-mortem examination was set to take place on Sunday.

The desecration of Sikh temples is a highly emotive issue among the Sikh community. The incident comes ahead of legislative elections in Punjab state next year. Punjab Chief Minister Charanjit Singh Channi has been accused by political opponents of not doing enough to safeguard holy sites in the region.

Balwinder Bhunder, a politician for opposition party Akali Dal, condemned Saturday’s incident as a deliberate attempt “to weaken Punjab which is the sword arm of India”.

“Some people have made it a political game over the last five years,” he said in an interview with the NDTV broadcaster.

Similar incidents have been recurrent at places of worship. A man was apprehended on Wednesday for allegedly throwing a small Sikh holy book, the Gutka Sahib, into a pool surrounding the Golden Temple, according to the Hindustan Times.

SGPC president Harjinder Singh Dhami told the news outlet that the incidents “seem a conspiracy hatched to provoke sentiments of the Sikhs and vitiate atmosphere of Punjab”.

“The police and the government should expose the forces behind such incidents and stringent punishment must be given to the culprits,” the SGPC chief said.