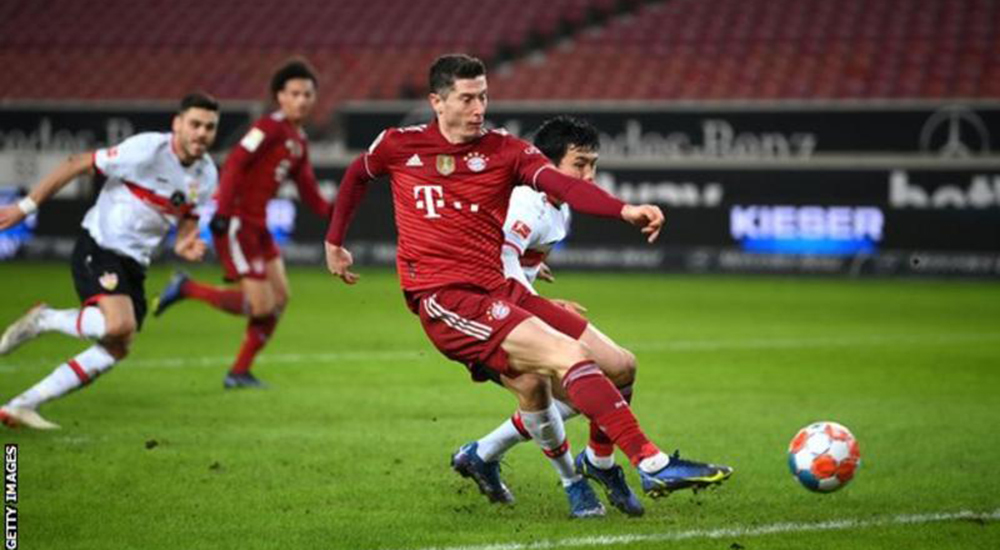 Bayern Munich’s Serge Gnabry scored a hat-trick and set up two more for Robert Lewandowski in a 5-0 demolition of hosts VfB Stuttgart on Tuesday, that opened up a nine-point lead at the top of the Bundesliga, Reuters reported.

The Bavarians, who secured the unofficial ‘autumn championship’ ahead of next week’s start of the three-week winter break and are chasing a record-extending 10th consecutive league title, now have 40 points from 16 matches.

Second-placed Borussia Dortmund, on 31 from 15 games, are in action on Wednesday against Greuther Fuerth.

“Serge scored an outstanding goal, scored another two in the second half and then added two more assists,” Bayern coach Julian Nagelsmann said.

“Both those assists were extremely good, very difficult to play them like that. Serge is just an outstanding player who had been playing a bit less than he deserves recently due to a back problem but today did it really, really well.”

Gnabry, who had six efforts on goal in the first half alone, put the visitors in front in the 40th minute, curling a shot into the far top corner, and grabbed his second goal in the 53rd.

The Bavarians, struggling with a long list of absences, including Leon Goretzka, Corentin Tolisso and Joshua Kimmich among others, showed no signs of weakness, even when Kingsley Coman had to be taken off injured in the 27th minute.

Substitute Leroy Sane instantly provided a fresh spark as Bayern scored either side of the break and another three times in a five-minute spell in the second half.

Gnabry turned provider and found Lewandowski, who chipped the ball over keeper Florian Mueller, for Bayern’s third goal in the 69th and then he teed up another one for the Polish striker with an unselfish cutback in the 72nd.

Lewandowski’s second goal of the evening meant he equalled Gerd Mueller’s 1972 record of 42 Bundesliga goals in a single calendar year. He can break the record in their last league game of the year against VfL Wolfsburg on Friday.

Gnabry got his reward for being unselfish, scoring his hat-trick in the 74th to complete the rout.

Stuttgart, who saw their three-game unbeaten run come to an end, are on 17 points in 15th.