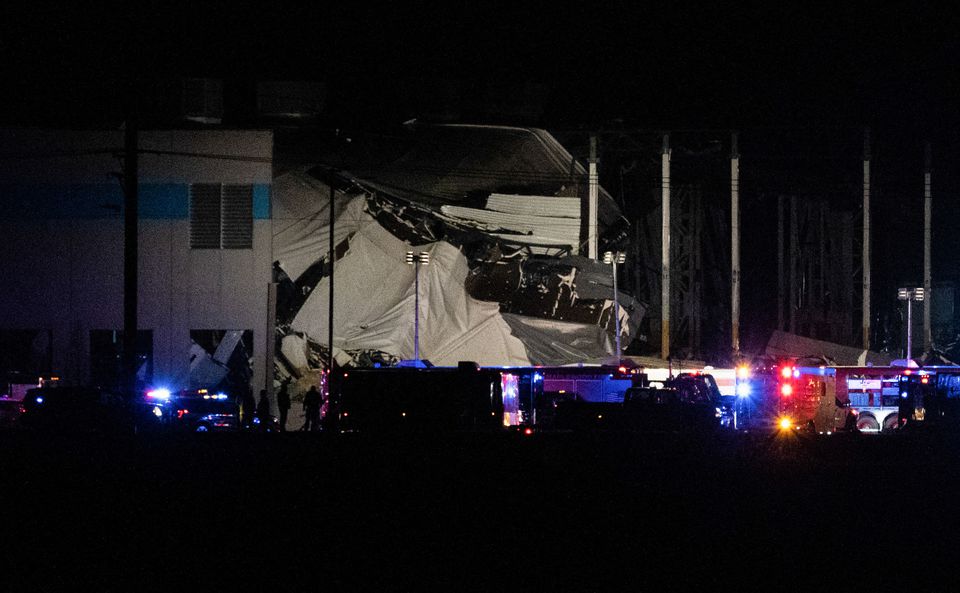 Some 50 people are “likely” to have been killed in a devastating outbreak of tornadoes that ripped through Kentucky and several other U.S. states late Friday and early Saturday, Kentucky Governor Andy Beshear said, Reuters reported.

He told local TV station WLKY that the number of dead could be “significantly north of that”, the Washington Post reported.

“The reports are really heartbreaking,” he said, according to the Post. It added that a spokeswoman for the state’s emergency management service said that rescue officials had not confirmed figures for deaths or injuries as of early Saturday.

Some of the worst destruction was in Mayfield, in western Kentucky, the New York Times reported. About 110 people were inside a candle factory in the area when the tornado ripped through, it added.

“We believe we’ll lose at least dozens of those individuals,” Beshear was quoted as saying by the Times.

In Tennessee, the severe weather killed at least three people, Dean Flener, spokesman for the state’s Emergency Management Agency, said in comments carried by the Post.

At least one person was killed and five were injured when a tornado shredded the roof of a nursing home in Monette in northern Arkansas, the Post quoted local officials as saying.

In Illinois, authorities said many people were trapped after a roof partially collapsed at an Amazon.com Inc (AMZN.O) warehouse near St. Louis late on Friday, after tornadoes and strong storms blew through the area.

Beshear, who declared a state of emergency in his state, was quoted as saying the damage would be “some of the worst … we’ve seen in a long time”.

The storms caused a CSX company freight train to derail in western Kentucky, although it said no injuries were reported, the Times said.

Bill Bunting, operations chief at the Storm Prediction Center, part of the National Weather Service, said at least five states were hit by the tornadoes, naming them as Illinois, Kentucky, Tennessee, Missouri and Arkansas, the Times reported.