Number of jailed journalists reached global high in 2021, at least 24 killed for their coverage -CPJ report 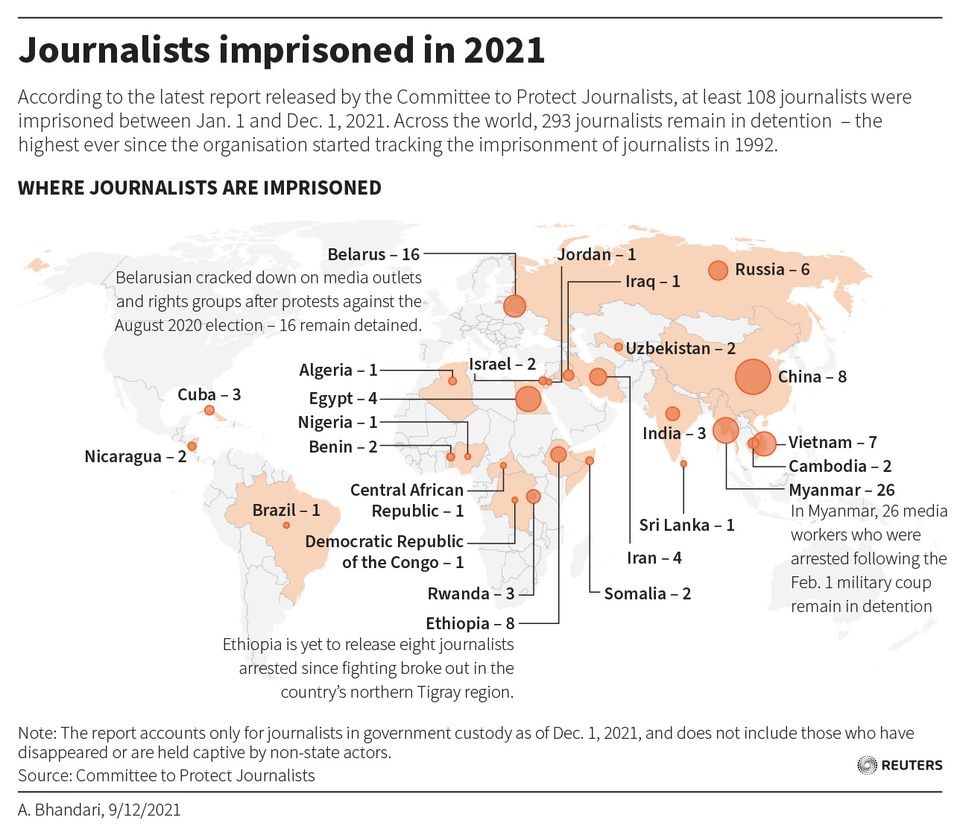 The number of journalists worldwide who are behind bars reached a global high in 2021, according to a new report from the nonprofit Committee to Protect Journalists, which says that 293 reporters were imprisoned as of Dec. 1 this year, Reuters reported.

At least 24 journalists were killed because of their coverage, and 18 others died in circumstances that make it too difficult to determine whether they were targeted because of their work, the CPJ said on Thursday in its annual survey on press freedom and attacks on the media.

While the reasons for jailing reporters varies between countries, the record number reflects political upheaval around the world and a growing intolerance of independent reporting, according to the U.S.-based nonprofit.

“This is the sixth year in a row that CPJ has documented record numbers of journalists imprisoned around the world,” said CPJ Executive Director Joel Simon in a statement. “The number reflects two inextricable challenges – governments are determined to control and manage information, and they are increasingly brazen in their efforts to do so.

According to the latest report released by the Committee to Protect Journalists, a record 293 journalists remain imprisoned as of Dec. 1, 2021 – the highest ever since the organisation started tracking the imprisonment of journalists in 1992.

The journalists who were killed in 2021 include Danish Siddiqui, a Reuters photographer who died in a Taliban attack in Afghanistan in July, and Gustavo Sanchez Cabrera, who was shot and killed in Mexico in June.

China imprisoned 50 journalists, the most of any country, followed by Myanmar (26), which arrested reporters as part of a crackdown after its Feb. 1 military coup, then Egypt (25), Vietnam (23) and Belarus (19), the CPJ said.

For the first time, the CPJ’s list includes journalists incarcerated in Hong Kong – a byproduct of the 2020 national security law, which makes anything Beijing regards as subversion, secession, terrorism or colluding with foreign forces punishable by up to life in prison.

Mexico, where journalists are often targeted when their work upsets criminal gangs or corrupt officials, remains the Western hemisphere’s deadliest country for reporters, according to the CPJ.