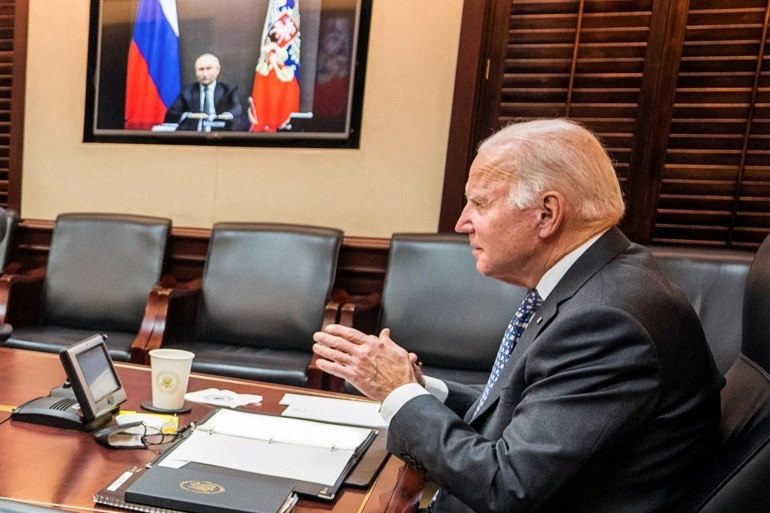 President Joe Biden warned Russian President Vladimir Putin on Tuesday that the West would impose “strong economic and other measures” on Russia if it invades Ukraine, while Putin demanded guarantees that NATO would not expand farther eastward, Reuters reported.

The two leaders held two hours of virtual talks on Ukraine and other disputes in a video call about U.S.-Russian relations, which have sunk to their lowest point since the end of the Cold War more than three decades ago, as Russia masses tens of thousands of troops on Ukraine’s border.

Putin responded to the warning with a demand for reliable, legally binding guarantees against NATO expansion eastward and complained about NATO attempts to “develop” Ukrainian territory,” the Kremlin said.

The White House said Biden did not make any guarantees to limit NATO expansion with regard to Ukraine.

“I will tell you clearly and directly he made no such commitments or concessions. He stands by the proposition that countries should be able to freely choose who they associate with,” Biden’s national security adviser Jake Sullivan told reporters.

No breakthroughs were reported but both sides agreed to continue communications, a development that could lower global tensions.

The Kremlin has denied harboring any intention to attack Ukraine and has said a troop buildup on its southern border is defensive, but neighboring nations are sounding alarms.

Biden warned Putin he could face stiff economic sanctions, the disruption of the Nord Stream 2 gas pipeline to Europe, and that the United States and European allies would provide additional defensive capabilities to Ukraine.

The president “made clear that the U.S. and our Allies would respond with strong economic and other measures in the event of military escalation,” the White House said in a statement.

“Things we did not do in 2014 we are prepared to do now,” Sullivan told reporters after the call, referring to the reaction to Russia’s annexation of Crimea from Ukraine.

In case of an attack, the United States would be looking to respond positively if Baltic allies ask for additional U.S. “capabilities” or “deployments,” he said.

The United States could also target Russia’s biggest banks and Moscow’s ability to convert roubles into dollars and other currencies, one official said.

In 2014, Washington focused mainly on defensive, non-lethal aid following Russia’s annexation of Crimea out of fear it would escalate the crisis.

Biden was “direct and straightforward” with Putin, Sullivan said. “There was a lot of give-and-take, there was no finger-wagging, but the president was crystal clear where the United States stands on all of these issues,” Sullivan said.

The Kremlin said Putin told Biden it was wrong to put all the responsibility on Russia’s shoulders for current tensions.

Moscow has voiced rising irritation over Western military aid to Ukraine, a fellow former Soviet republic that has tilted toward the West since a popular revolt toppled a pro-Russian president in 2014, and what Russia calls creeping NATO expansion.

“Therefore, Russia is seriously interested in obtaining reliable, legally fixed guarantees that rule out NATO expansion eastward and the deployment of offensive strike weapons systems in states adjacent to Russia,” the Kremlin said.

Putin also called for guarantees that offensive strike systems would not be deployed in countries close to Russia, according to the Kremlin.

Russian TV footage showed Biden and Putin greeting each other in a friendly manner at the start of the virtual summit.

Both sides say they hope the two leaders can hold an in-person summit to discuss ties between the two nations, which have long-standing differences over Syria, U.S. economic sanctions and alleged Russian cyberattacks on U.S. companies.

A Ukraine official said after the talks that Kyiv was grateful to Biden for his “unwavering support”.

For the Kremlin, the growing NATO embrace of neighbouring Ukraine – and what it sees as the nightmare possibility of alliance missiles in Ukraine targeted against Russia – is a “red line” it will not allow to be crossed.

Moscow has questioned Ukrainian intentions and said it wants guarantees that Kyiv will not use force to try to retake territory lost in 2014 to Russia-backed separatists, a scenario Ukraine has ruled out.

Leaders from Britain, the United States, France, Germany and Italy spoke on Monday and “agreed to stay in close touch on a coordinated and comprehensive approach in response to Russia’s military build-up on Ukraine’s borders”, the White House said.

The Russian rouble weakened slightly on Tuesday, with some market analysts predicting the talks would de-escalate tensions and others saying the U.S. sanctions threat eroded hopes of finding common ground.

U.S. officials have told members of Congress they have an understanding with Germany about shutting down the Nord Stream 2 pipeline if Russia invades Ukraine, a senior congressional aide said.

“If President Putin moves on Ukraine, our expectation is that the pipeline will be suspended,” Undersecretary of State for Political Affairs Victoria Nuland told the Senate Foreign Relations Committee.

The United States has evaluated the possibility of curbing investors’ ability to buy Russian debt on the secondary market, a measure that even if taken only by Washington was seen as having a severe impact on Russia’s government, according to a person with direct knowledge of the matter.

Washington could target the Russian Direct Investment Fund as well.

CNN reported that sanctions could include disconnecting Russia from the SWIFT international payment system used by banks around the world, an extreme step that would likely require coordination with allies.

The United States has urged both Ukraine and Russia to return to a set of largely unimplemented agreements signed in 2014 and 2015 that were designed to end the conflict in eastern Ukraine.