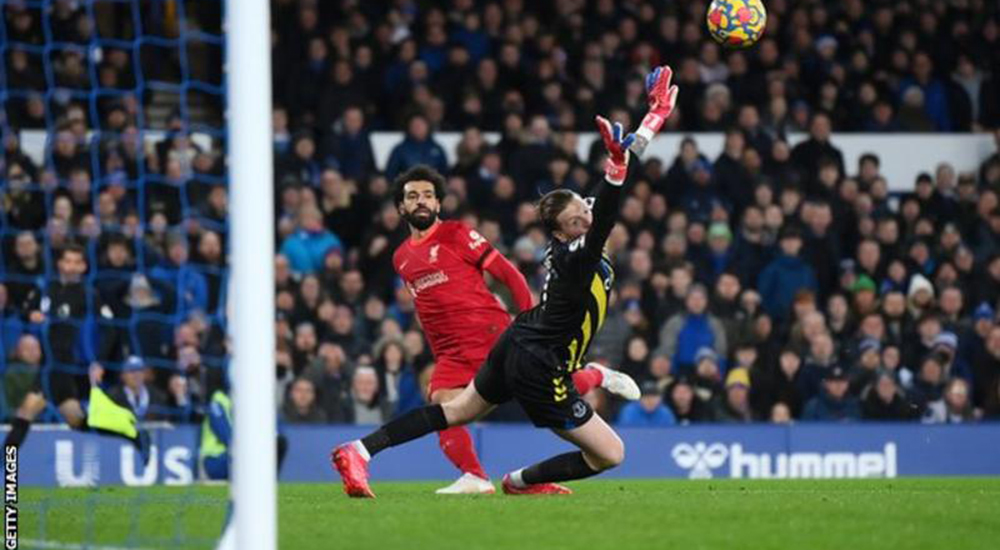 Liverpool won the Merseyside derby with a 4-1 victory at Everton on Wednesday while Premier League leaders Chelsea fought for a 2-1 win at Watford and Manchester City enjoyed a 2-1 victory at Aston Villa, Reuters reported.

With fourth-placed West Ham held to a 1-1 draw at Brighton they are now seven points behind third-placed Liverpool who, along with Chelsea and Manchester City, look set for a three-horse race for the title.

After 14 games, Chelsea lead on 33 points with City a point behind and Liverpool on 31.

Juergen Klopp’s side got four goals at the home of their neighbours for the first time since 1982, with Mohamed Salah scoring twice to maintain his electric form.

Jordan Henderson put Liverpool in front with a magnificent curling shot in the ninth minute before setting up Salah for the second.

It was one-way traffic and Everton, led by former Liverpool manager Rafael Benitez, looked at real risk of an embarrassing scoreline.

Demarai Gray pulled back a goal before the interval to give a restless home crowd some hope before a mistake by Seamus Coleman allowed Salah in on goal to make it 3-1 and then Diogo Jota produced a brilliant turn before blasting past Jordan Pickford to complete the rout.

“I liked what I saw and it was by far the best performance we’ve done at Goodison,” said Klopp.

“We made a big step in our development that we can take these kind of games, even though they are really important for the opponent. We can put emotions to the side. It was for sure a nine-out-of-10 performance from each of the boys,” added the German.

After recent draws against Burnley and Manchester United, Chelsea could ill afford to drop points at Watford but manager Thomas Tuchel conceded they were fortunate to collect all three from Vicarage Road.

The visitors took the lead when Mason Mount coolly converted after a well-worked move in the 29th minute.

Watford deservedly levelled before the break through Nigerian Emmanuel Dennis only for substitute Hakim Ziyech to strike the winner 12 minutes later with the outstanding Mount the creator.

“We need a lot of points if we want to stay in the title race. We felt like we lost two points against Burnley and Manchester United. We stole minimum two, maybe three back today,” said Tuchel.

“Overall we can do much better. There are some reasons — we have injured players and some key players due to overload were not on the pitch. I don’t want to be too critical. Watford deserved more,” he added.

Silva doubled their advantage with a breathtaking effort in the 43rd, volleying superbly past Martinez from 15 metres after City broke away from their own penalty area with Riyad Mahrez releasing Gabriel Jesus on the right flank.

Ollie Watkins got Villa back into the game but City collected their fourth league win in a row.

“We came here against an incredible team with quality and top players and the way we played in the first half and even the second was magnificent,” said City manager Pep Guardiola.

“We conceded in the first minute of the second and it’s so difficult but we played with huge personality, a really good game,” he said.

An 89th-minute overhead kick from Neal Maupay frustrated West Ham at Brighton after the Londoners had taken an early lead through Czech midfielder Tomas Soucek’s header.

Leicester City had to come from behind twice to get a 2-2 draw at Southampton with James Maddison’s 49th-minute strike earning Brendan Rodgers’s side a point that leaves the Foxes in eighth place.

Sixth placed Wolverhampton Wanderers were frustrated in a 0-0 draw at home to 18th-placed Burnley who have drawn five of their last seven games.