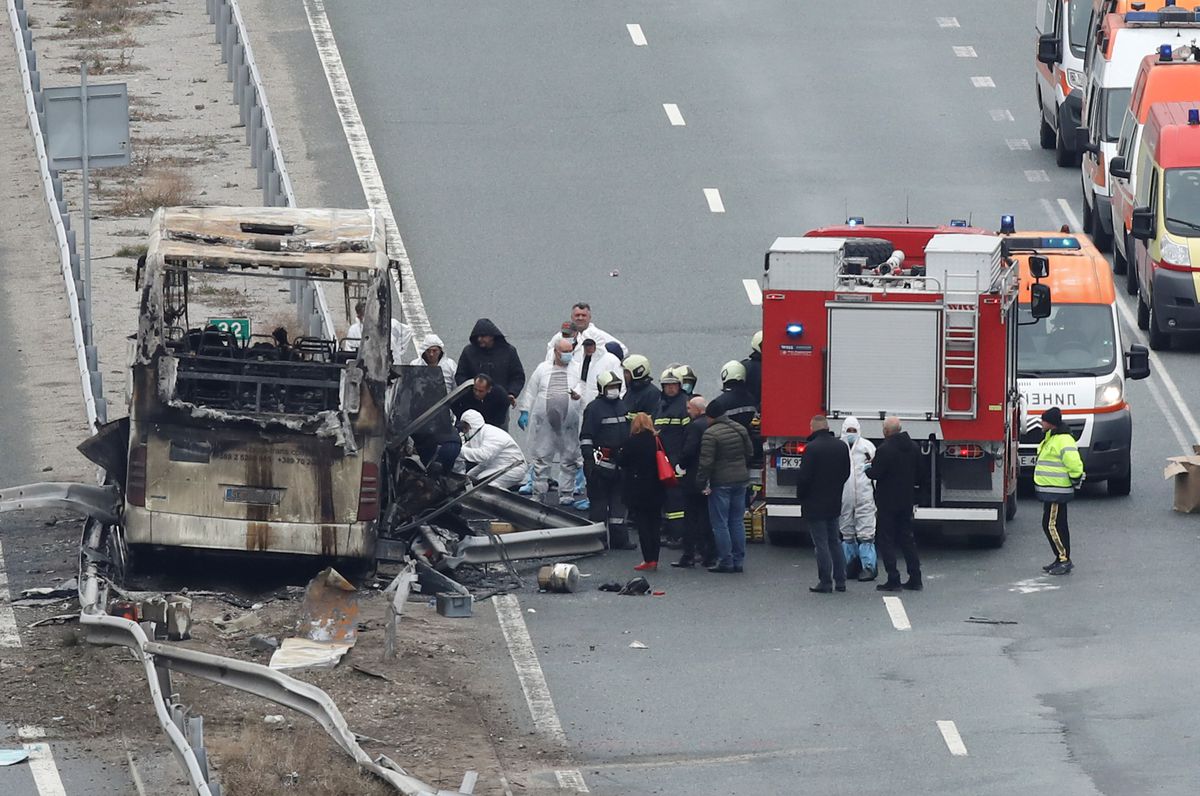 SOFIA/SKOPJE: A bus carrying North Macedonian tourists crashed in flames on a highway in western Bulgaria before daybreak on Tuesday, killing at least 45 people, including 12 children, officials said.

The cause of the accident was unclear but the bus appeared to have hit a highway barrier either before or after it caught fire, the officials said.

Seven people who leapt from the burning bus were rushed to the Pirogov emergency hospital in the Bulgarian capital Sofia and were in a stable condition, hospital staff said. They had suffered burns and one had a broken leg.

Bulgaria’s interior ministry said 45 people had died, making it the most deadly bus accident in the Balkan country’s history.

Interim Interior Minister Boyko Rashkov said bodies were “clustered inside and are burnt to ash”.

“The picture is terrifying, terrifying. I have never seen anything like that before,” he told reporters at the site.

The coach party had been returning to Skopje, capital of North Macedonia, after a weekend holiday trip to Istanbul, a trip of about 800 km (500 miles).

“Human error by the driver or a technical malfunction are the two initial versions for the accident,” Sarafov said.

CRYING AND IN SHOCK

In front of the Ismail Qemali elementary school in Skopje, pupils cried after hearing news that five of their schoolmates, all from one family, had been killed.

“Ergin was my friend. He was a very good boy. Very nice. I am so sorry that they died,” Blerim Bushi, 11, told Reuters.

In Sofia, Adnan Yasharovski, 45, said his 16-year-old daughter Zuleikha called him to say she had survived the crash, and he travelled to see her in hospital.

“She was crying. Her hands were burnt but otherwise fine,” he told Reuters outside the hospital.

“She didn’t say much, she was crying and she was in shock. I only saw her through the door as due to COVID, they did not let me into the room.”

Some relatives gathered outside the Besa Trans agency in Skopje, whose Facebook page advertised twice-weekly trips to Istanbul, and which Yasharovski said ran the trip. The office was closed and its representatives could not be reached for comment.

Television footage showed the bus standing upright but charred and gutted by fire in the middle of the highway, which was wet from rain.

“This is a huge tragedy,” North Macedonian Prime Minister Zoran Zaev told reporters in Sofia and expressed his condolences to relatives of the victims.

Zaev said the passengers were all from North Macedonia but appeared to include a Serbian citizen and a Belgian citizen. It was unclear whether the two were among the victims or injured.

Zaev said he had spoken to one of the seven survivors who told him the passengers were sleeping when they were woken by the sound of an explosion.

He said people sitting at the back of the bus were able to break a window and jump out.

Zaev said the passengers were from various communities in North Macedonia, a country of 2 million that borders Bulgaria and is home to an ethnic Albanian minority.

In Skopje, ethnic Albanian Osman, 31, told Reuters he had come to the office of the travel agency with his brother and sister seeking information about their parents.

“We do not know if they were on the bus that crashed or not. We have no information about them. The agency is not answering the phone. Perhaps we will need to go to Bulgaria,” he said.

“Great grief for the 45 lost lives of Albanians from Northern Macedonia during the tragic accident in Bulgaria,” he said on Twitter.