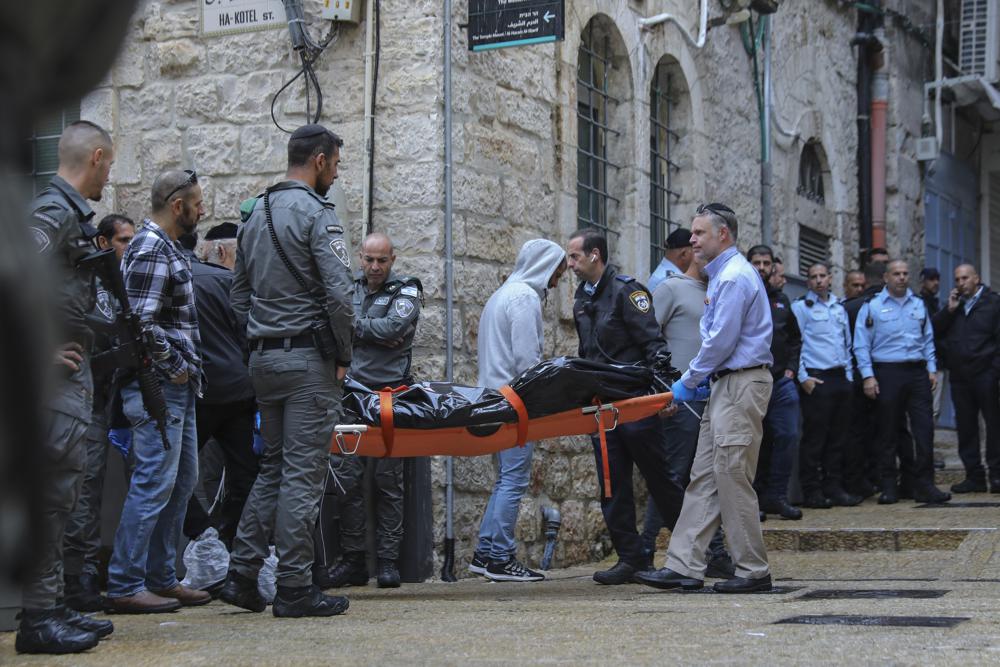 A Palestinian assailant killed one Israeli and injured four others before being fatally shot by Israeli police near the entrance to a flashpoint Jerusalem holy site Sunday, police said.

Police said the attack took place near an entrance to a contested flashpoint shrine known to Jews as the Temple Mount and to Muslims as the Noble Sanctuary, Associated Press reported. Violence surrounding the site, which is considered holy by both faiths, has triggered previous rounds of fighting between Israel and the Palestinians, most recently in May.

Police said two of those lightly injured were officers and identified the attacker as a 42-year-old east Jerusalem resident. Public Security Minister Omer Bar Lev told reporters the gunman was a member of Hamas’s political arm from the Shuafat refugee camp in east Jerusalem, and that the man’s wife left the country three days earlier.

Palestinian media identified the attacker as Fadi Abu Shkhaidem, and shared an image of him wearing long black robes and a black coat and carrying a firearm similar to the one shown in police photos, according to Associated Press.

Prime Minister Naftali Bennett said at the start of the weekly Cabinet meeting that he ordered security forces to be on alert to prevent other attacks.

The Hamas militant group praised the attack in a statement but stopped short of claiming responsibility, calling the incident a “heroic operation.”

“Our people’s resistance will continue to be legitimate by all means and tools against the Zionist occupier until our desired goals are achieved and the occupation is expelled from our holy sites and all of our lands,” spokesman Abdel Latif al-Qanou said.

Dimiter Tzantchev, the EU ambassador-designate to Israel, said in a statement on Twitter that his thoughts were “with the victims of the cowardly attack in the Old City of Jerusalem” and condemned “this senseless attack against civilians. Violence is never the answer.”

Sunday’s incident was the second of its kind in Jerusalem’s historic Old City in recent days. On Wednesday, a Palestinian teen was fatally shot after stabbing two Israeli border police.

In that incident, the two officers were hospitalized and the teen, identified by police as a 16-year-old from east Jerusalem, was pronounced dead at the scene, Reuters reported .

Palestinians have carried out dozens of stabbing, shooting and car-ramming attacks targeting Israeli civilians and security personnel in recent years. Palestinians and rights groups contend some of the alleged car-rammings were accidents and accuse Israel of using excessive force.

But shootings around Jerusalem’s Old City and its holy sites are relatively rare, and Israel maintains a sizeable security presence in the area.

Israel captured east Jerusalem, including the Old City and its Christian, Muslim and Jewish holy sites, along with the West Bank and Gaza Strip in the 1967 Mideast war. It later annexed east Jerusalem in a move unrecognized by most of the international community.

The Palestinians seek the occupied West Bank and Gaza for a future independent state, with east Jerusalem as its capital.