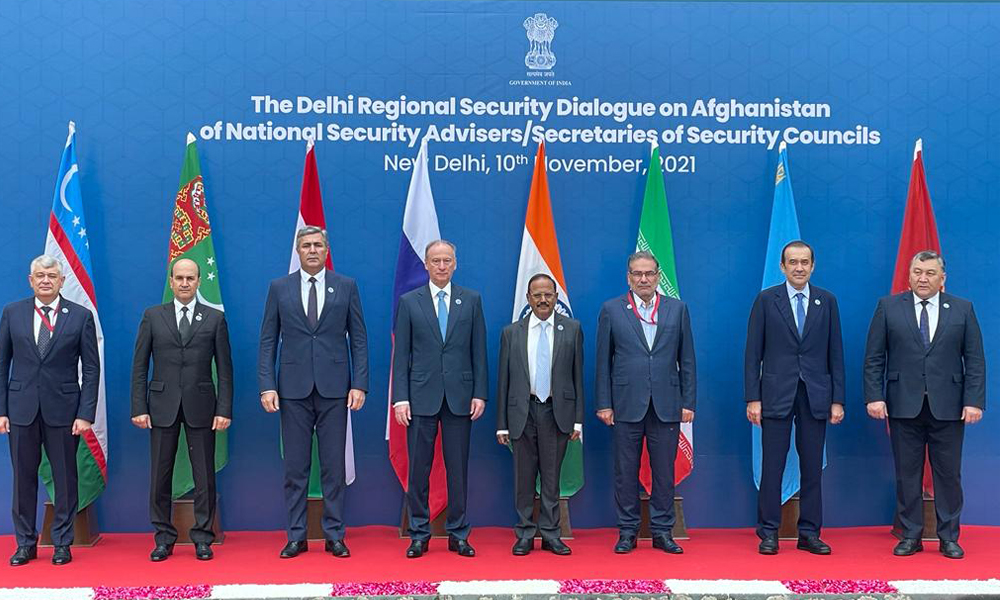 Top security officials of eight countries, including India, Iran and Russia, on Wednesday called for closer coordination and collective efforts to tackle threats such as terrorism emanating from Afghanistan and to address a looming humanitarian crisis, Hindustan Times reported.

In his opening remarks at the Delhi Regional Security Dialogue on Afghanistan being hosted by India, National Security Adviser (NSA) Ajit Doval said the time has come for closer consultations and greater coordination among regional countries to find solutions to recent developments in the war-torn country.

The NSAs and security council secretaries of Iran, Russia, Kazakhstan, Kyrgyzstan, Tajikistan, Turkmenistan and Uzbekistan, in their brief opening statements, pushed for collective efforts to cope with threats such as terrorism and drug trafficking emanating from Afghanistan and to provide humanitarian aid to the Afghan people before the onset of winter, according to Hindustan Times.

“We all have been keenly watching the developments in [Afghanistan]. These have important implications not only for the people of Afghanistan but also for its neighbours and the region,” Doval said in his televised remarks.

“This is a time for close consultations among us, greater cooperation, interaction and coordination among the regional countries,” he said.

Though this is the first such meeting on Afghanistan to be convened by India, the dialogue is the continuation of a mechanism whereby Iran hosted two meets in 2018 and 2019. Pakistan and China were invited to Wednesday’s meeting but opted not to participate.

Rear Admiral Ali Shamkhani¸ secretary of Iran’s supreme national security council, referred to the challenges of terrorism and a refugee crisis and said, “The solution comes only through the formation of an inclusive government with the participation of all ethnic groups.”

Nikolai Patrushev, secretary of Russia’s security council, called for practical measures to deal with threats and challenges emanating from Afghan territory. Noting the proliferation of dialogue mechanisms on Afghanistan, including the Moscow Format and the Turkic Council, he said it was important that these forums should not duplicate work but complement each other.

He also noted that the Moscow Format, which held its third meeting in the Russian capital on October 20, has important potential to coordinate efforts to settle the Afghanistan issue.

“In Moscow, we laid a good foundation to determine the position of our countries regarding the development of the dialogue with the Taliban as well as to practically coordinate the efforts of all stakeholders of the region,” Patrushev said.

Kazakhstan’s national security committee chairman Karim Massimov said his country is closely monitoring threats and challenges coming from Afghanistan. “With the Taliban movement coming to power, the situation inside the country remains complicated. There are many obstacles to form an effective government system,” he said.

“Terrorist organisations are intensifying their activities. We are strongly concerned with the operations of the Central Asian fighters,” Massimov added.

Tajikistan’s security council secretary Nasrullo Rahmatjon Mahmudzoda, said his country was concerned about developments following the Taliban takeover because it has a long border with Afghanistan.

“The current situation creates extra risk and possibility for growth of drug trafficking, terrorism and criminality. The situation on the Tajik-Afghan border remains complicated currently under the influence of many negative factors,” he said, adding that Afghanistan may face a “humanitarian catastrophe” during the upcoming winter.

“We need to find a solution to provide all the necessities for the population of Afghanistan,” Mahmudzoda said.

India is looking to the dialogue to help forge a joint approach for tackling security threats emanating from Afghanistan.

According to an Indian assessment, the five main threats and challenges following the Taliban takeover on August 15 are terrorism within Afghanistan and across its borders, radicalisation and extremism, cross-border movements, drug production and trafficking, and the danger posed by vast amounts of weapons and military gear left behind by US troops, Hindustan Times reported.