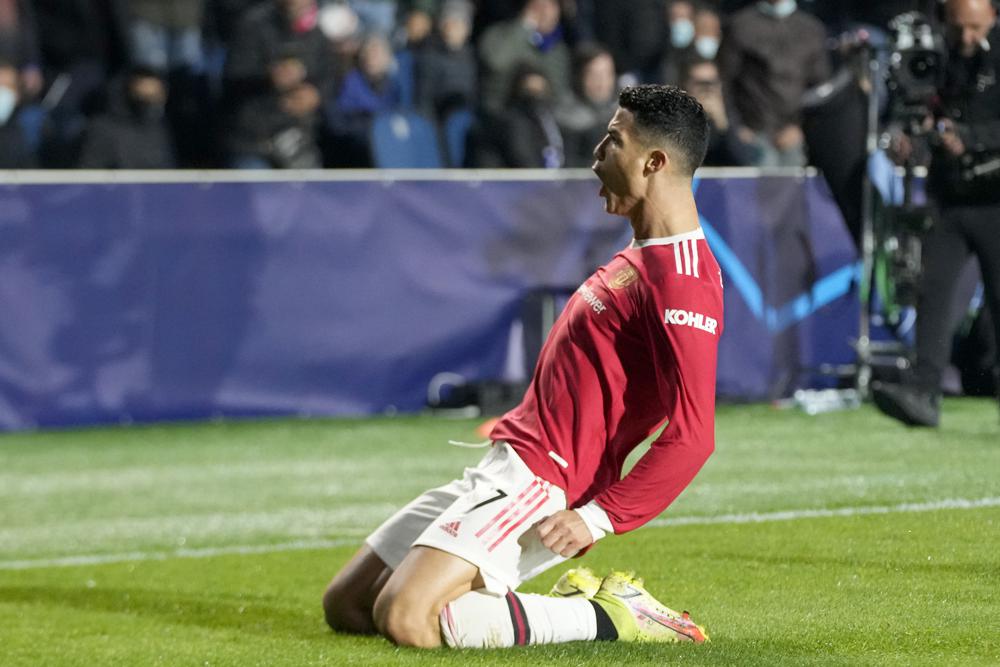 Cristiano Ronaldo again came to Manchester United’s rescue with two goals — including a stoppage-time effort — to salvage a 2-2 draw at Atalanta in the Champions League on Tuesday, Associated Press reported.

Ronaldo had scored a late winner against Atalanta at Old Trafford two weeks ago when United overturned a 2-0 halftime deficit to win 3-2. And the Portuguese forward scored at the end of each half to help his team to what could prove to be a precious point in Bergamo. And a point it barely deserved as Atalanta controlled much of the match.

“It was a difficult game, I know when we play in Bergamo it is always difficult, but we believe until the end and I am so happy,” Ronaldo told BT Sport.

Ronaldo has now scored five goals in four Champions League matches since his return to United, including a late winner in the 2-1 victory over Villarreal in late September. He has netted nine in 11 matches since his transfer from Juventus and appears to be almost singlehandedly saving Ole Gunnar Solskjaer’s position as manager.

“We all have our roles and responsibilities and of course Cristiano is a leader in the group. But that’s what he does, he scores goals,” Solskjaer said, before warning there is more to come from his star forward.

Josip Iličić had given Atalanta the lead in the 12th minute with an effort that David de Gea was unable to keep out and Duván Zapata restored the home team’s lead early in the second half.

United remained atop Group F. It is level on points with Villarreal after the Spanish squad beat Young Boys 2-0 in the other group match. Atalanta is two points further back.

“Disappointment? On the scale of one to a hundred, it’s a thousand,” Atalanta coach Gian Piero Gasperini said. “We believed because even their drive seemed exhausted. We were controlling the match, there was hardly any time left. But against us there was an extraordinary player, with incredible ball skills.”

Atalanta’s injury crisis was showing signs of easing but it was still without Rafael Tolói — the captain — and fellow defenders Robin Gosens and Hans Hateboer.

There was a frantic start in Bergamo and United almost took the lead in fortuitous circumstances. Scott McTominay’s effort took a massive deflection off José Luis Palomino — completely wrong-footing Atalanta goalkeeper Juan Musso — and slowly rolled toward the empty net before bouncing off the left post.

Instead it was Atalanta that went in front in the 12th minute when Zapata crossed in from the left and Iličić swept in a first-time shot which was straight at De Gea but nevertheless squirmed under the body of the Spanish goalkeeper.

United almost drew level immediately as Ronaldo tried to latch onto a through ball but Musso was quick off his line and managed to get to it just before the Portugal forward.

But Atalanta was the more dangerous side and Zapata had two great opportunities. First, he sprung the offside trap to beautifully control a long ball over the top and bear down on De Gea’s goal but fired over. Then, in the 32nd minute, only a fine block from Eric Bailly prevented Zapata from doubling his team’s lead after Paul Pogba was again guilty of surrendering possession in a dangerous position.

Matters grew worse for United as Raphaël Varane had to go off with an injury, and the defender will likely be a doubt for Saturday’s Premier League match against Manchester City.

However, his replacement Mason Greenwood had a hand in the equalizer as he received the ball from Ronaldo before picking out Bruno Fernandes in the area and he back-heeled it smartly for his compatriot to fire into the far side of the net.

Zapata had been a thorn in United’s side all night and he restored his team’s lead in the 56th after springing the offside trap and dinking the ball over De Gea. There was a lengthy check by video review before the goal was awarded.

De Gea somewhat atoned for his error on Atalanta’s opener with a fine save late on to deny Zapata and that proved crucial as, shortly after, United leveled. It was the second minute of stoppage time when Greenwood flicked on the ball to Ronaldo, who volleyed into the bottom left corner.

Ronaldo slid on his knees across to the area of the field in front of the United fans as he was engulfed by his teammates in celebration. But they then faced an agonizing wait for another lengthy VAR check for a possible handball by Greenwood before the goal was affirmed.