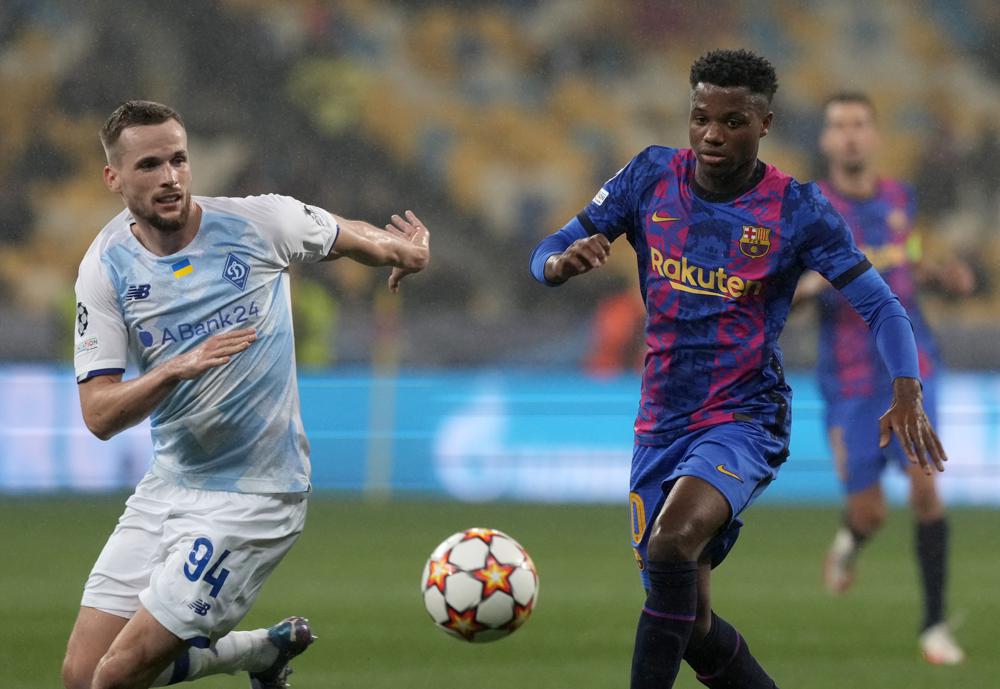 KYIV: With an interim coach and depleted by injuries, Barcelona came through with a crucial win at Dynamo Kyiv to boost its chances of advancing in the Champions League, Associated Press reported.

Ansu Fati scored a second-half winner as Barcelona edged Dynamo 1-0 in Ukraine on Tuesday to put itself in good position to reach the knockout rounds of the European competition.

Fati scored with a powerful one-timer from near the penalty spot to give the Catalan club its second consecutive victory over Dynamo after it had started its campaign with consecutive losses.

“We are going to keep fighting,” said the 19-year-old Fati, who was making his 50th appearance with Barcelona. “We only depend on ourselves now and we will give everything we have.”

The victory left Barcelona with six points in Group E, two more than third-place Benfica, which lost 5-2 at Bayern Munich in the other group match. Bayern has 12 points after winning all of its matches so far, while Dynamo is last with one point.

Barcelona next hosts Benfica, and a win will be enough to secure the Catalan club in the next round. It lost 3-0 to the Portuguese club in Lisbon after opening with a 3-0 defeat against Bayern at the Camp Nou Stadium.

Barcelona has advanced to the knockout rounds of the Champions League every time since being eliminated in the group stage in 2000-01.

Fati, making his first Champions League start in nearly a year, scored his third goal of the season with his strike in the 70th minute.

Minutes earlier the Catalan club had a penalty reversed by video review.

Interim coach Sergi Barjuán was on the Barcelona bench as the club was yet to replace Ronald Koeman, who was fired amid the team’s dismal start in its first season without Lionel Messi in nearly two decades.

Barcelona was coming off three setbacks — losses to Real Madrid and Rayo Vallecano and a home draw against Alavés in the Spanish league. Before that, it had beaten Dynamo 1-0 at the Camp Nou for its first Champions League win this season.

Barcelona was without some key players because of injuries, including striker Sergio Aguero, defender Sergiño Dest and veteran defender Gerard Piqué, who scored the winner against Dynamo at the Camp Nou. Aguero will be sidelined for at least three months because of a heart issue.

“The goal was for Kun (Aguero),” Fati said. “This victory is for him.”

Midfielder Frenkie De Jong was back in Barcelona’s lineup after recovering from a muscle injury sustained in the home loss against Madrid.

This was the first time Dynamo qualified automatically to the group stage since the 2016-17 season.

Barcelona forward Ousmane Dembélé came off the bench in the 65th for his first appearance in several months.

Barcelona midfielder Nico González, 19, made his first start in the European competition.