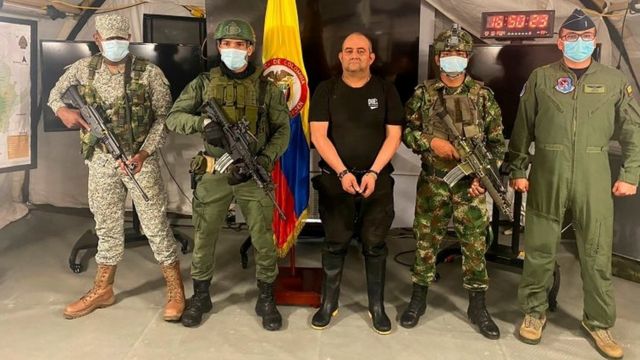 Colombia’s most wanted drug trafficker and the leader of the country’s largest criminal gang has been captured.

Dairo Antonio Úsuga, better known as Otoniel, was seized after a joint operation by the army, air force and police on Saturday, BBC reported.

“This is the biggest blow against drug trafficking in our country this century,” he said. “This blow is only comparable to the fall of Pablo Escobar in the 1990s.”

How was he caught?

Otoniel was captured in his rural hideout in Antioquia province in north-western Colombia, close to the border with Panama.

The operation involved 500 soldiers supported by 22 helicopters. One police officer was killed.

Otoniel had used a network of rural safe houses to move around and evade the authorities, and did not use a phone, instead relying on couriers for communication.

In the past, police have found special orthopaedic mattresses for Otoniel in these sparse homes, as he suffered back pain from a herniated disc.

But El Tiempo newspaper said that authorities managed to pinpoint the location where he was eventually captured two weeks ago.

Chief Vargas said his movements were traced by more than 50 signal intelligence experts using satellite imagery. US and UK agencies were involved in the search.

Mr Duque, quoted by AFP news agency, described the operation as “the biggest penetration of the jungle ever seen in the military history of our country”.

Colombia’s armed forces later released a photo showing its soldiers guarding Otoniel, who was in handcuffs and wearing rubber boots.

There have been several huge operations involving thousands of officers to capture the 50-year-old in recent years, but until now none have been successful.

There’s no doubt this is seen as a coup by Colombian authorities – they’ve been trying to capture Otoniel for several years now. The Gulf Cartel is a formidable and violent organisation with a great deal of power.

And the comparisons with Pablo Escobar are understandable. Otoniel is a household name and has been hugely powerful, especially in the north west of the country.

“In South America, there is no larger cocaine trafficker,” says Toby Muse, author of Kilo: Inside the Cocaine Cartels. “We are living in the golden age of cocaine, we are producing more cocaine than ever – that’s a fact.”

But the parallels perhaps stop there – Otoniel is not as well-known outside of Colombia. And speak to people who lived in the country at the peak of Pablo Escobar’s power, many feel they were more frightening times.

The question is, will Otoniel’s capture impact the trade of the illicit drug? It’s hard to know now. We’ll have to see what happens in the coming months but most experts seem to think that while demand for cocaine remains strong, it’s likely there will be new “capos” rising to the top to replace him.

Born in Antioquia in the early 1970s, Otoniel jumped between several guerrilla and paramilitary groups – including the Farc (Revolutionary Armed Forces of Colombia), the major Marxist-Leninist rebel group, and the United Self-Defence Forces of Colombia (AUC), a far-right paramilitary and drug trafficking gang.

When the AUC dissolved in 2005, he began working for the drug lord Daniel Rendón Herrera, known as Don Mario – head of the Urabeños, which later became known as the Gulf Clan.

Otoniel then took charge of the group after its previous leader – his brother – was killed by police in a raid on a New Year’s Eve party almost 10 years ago.

Colombia’s security forces labelled the gang as the country’s most powerful criminal organisation, while authorities in the US describe it as “heavily armed [and] extremely violent”.

The gang, which operates in many provinces and has extensive international connections, is engaged in drug and people smuggling, illegal gold mining and extortion.

It is believed to have about 1,800 armed members, who are mainly recruited from far-right paramilitary groups. Members have been arrested in Argentina, Brazil, Honduras, Peru and Spain.

The gang controls many of the routes used to smuggle drugs from Colombia to the US, and as far away as Russia.

The Colombian government, however, believes it has decimated its numbers in recent years, forcing many leading members to hide in remote regions in the jungle.

Otoniel now faces a number of charges, including sending shipments of cocaine to the US, killing police officers and recruiting children.

He was indicted in the US in 2009, and faces extradition proceedings, which could see him eventually appear in court in New York.