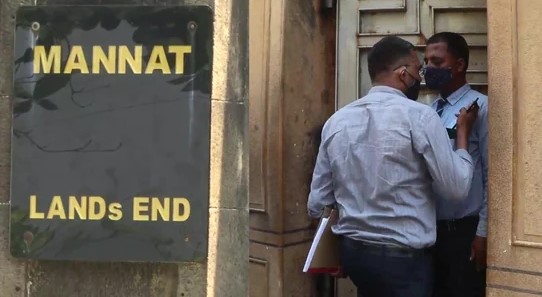 A team of Narcotics Control Bureau (NCB) on Thursday visited Mannat, the residence of Shah Rukh Khan in Mumbai, hours after the renowned actor visited the city’s Arthur Road Jail to meet his son Aryan, who has been behind bars since October 3 in connection with the cruise drugs case.

According to reports, the NCB officers went to Shah Rukh Khan’s house to collect some documents and not to conduct a raid; however, additional confirmation from the federal agency is still awaited in this regard, Hindustan Times reported.

A team of NCB also visited the house of actor Ananya Panday, who has been summoned today by the federal agency for questioning and is likely to appear before the investigators at 2pm today.

Visuals posted by the ANI news agency on Twitter showed the NCB officials arriving at the residences of both the Bollywood actors. In a subsequent series of tweets, the agency showed the NCB team waiting before the gates of Shah Rukh Khan’s residence, departing the site several moments later.