10 most consumed things during Dashain festival 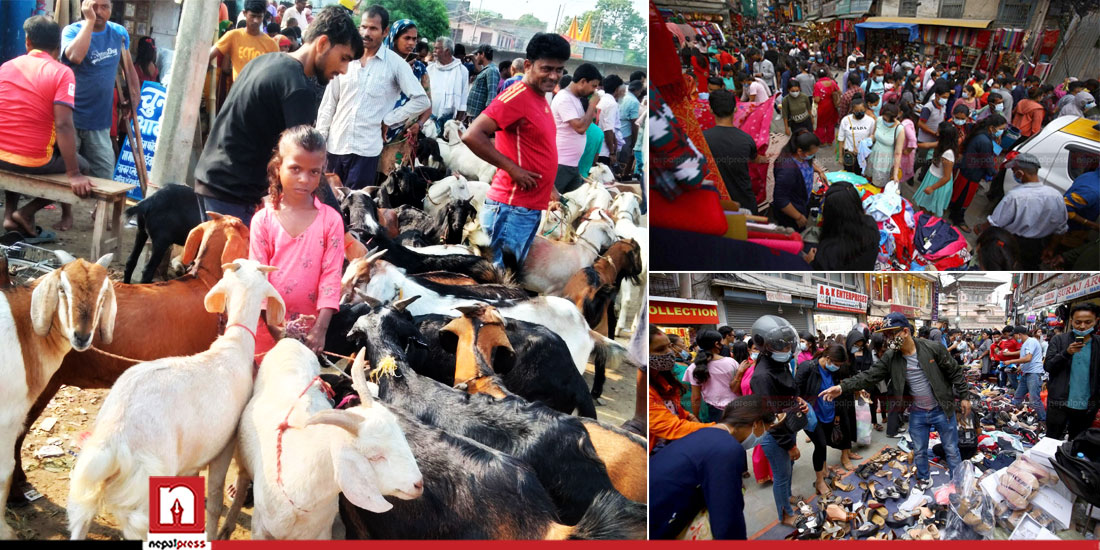 KATHMANDU: Dashain is the biggest and the longest festival of Hindus in Nepal. Dashain is also considered as a time of rejoicing, celebration of family and togetherness.

People enjoy the 15-day long festival by cooking and eating delicacies. Hence, the consumption of household items soars during this time.

There will be a surge in sales of food and non-food items during the festival.

People spend money more openly during the festival as job holders get a Dashain bonus equivalent to a month’s salary and the country also sees a surge in remittance inflow.

But, sad to say that Nepal still has to depend on other countries for items like clothes, gadgets and vehicles among others.

As people like to eat a variety of meat dishes, demand for goats, sheep, chickens and buffaloes shoot up during the festival.

More than 2.5 million people leave the Kathmandu Valley to celebrate Dashain festival in their hometown.

Around 3.5 million goats are slaughtered in the Kathmandu Valley during the Dashain festival. Apart from goats, the Valley needs 900,000 chickens and 1.5 million buffaloes.

Usually the traders bring in goats from Surkhet, Rukum, Salyan, Dang, Banke, Bardiya, Sindhuli, Ramechhap, Kavre, Nuwkot and Dhading among other places while sheep are brought from Manang, Mustang, Rasuwa and Tibet.

There is a culture of wearing new clothes while receiving Tika and Jamara along with the blessings from their elders.

Nepal imports clothes mainly from China, India and Bangladesh among other countries.

With the change in time, the demand for different brands of mobile phones has also been increasing. Nepal imported mobile phones worth around Rs 36.90 billion in the last fiscal year.

According to the Customs Office data, mobile phones worth around Rs 15 billion were imported in Dashain alone.

Traders said that there is a high demand for mobile phones of different brands mainly like Samsung, Apple, Huawei, Oppo and Nokia.

Dashain is the best time to buy two-wheelers and four-wheelers as most of the auto dealers offer cash discounts on vehicles to boost sales.

During his festival, people prefer to buy cars worth around Rs 3 million to 10 million. The demand for electric vehicles is also on the rise in recent times.

People buy cars of Tata, Hyundai, Suzuki, Toyota and other companies during the Dashain festival.

Likewise, people purchase bikes from different companies like Hero, Honda, Yamaha and Bajaj among others.

The demand for vehicles has increased by 70 percent in Dashain.

Chairman of the Automobile Association Krishna Prasad Dulal said that Nepal has been importing vehicles along with auto parts worth around Rs 300 billion annually.

The Federation of Nepali Gold and Silver Entrepreneurs said that 20-30 kg of gold is consumed during the Dashain festival.

The Federation said that gold and silver ornaments worth around Rs 270 million have been traded during the festival.

Dashain is a time when liquor sales soar as it plays an important role in celebrating the festival.

Various brands of whiskey, wine, vodka, beer and other alcoholic beverages will be in high demand during the festival.

There will be a high demand for sweets and fruits during Dashain. Fruits like apple, oranges and kiwi among others will be consumed more during Dashain.

The demand for vermilion power had increased drastically as it is used during the Tika, the main day of the Dashain festival. Vermilion powder is used on various occasions in Nepal as the majority of the people follow Hinduism.  Nepal imports vermilion powder from India.

Spices and herbs are used equally to make the dishes even more delicious. Ginger, garlic, cardamom, cinnamon, cumin, nutmeg, coriander, bay leaf, fenugreek and pepper among others are consumed more during Dashain.

Nepal has been importing all the spices and herbs from India except ginger.