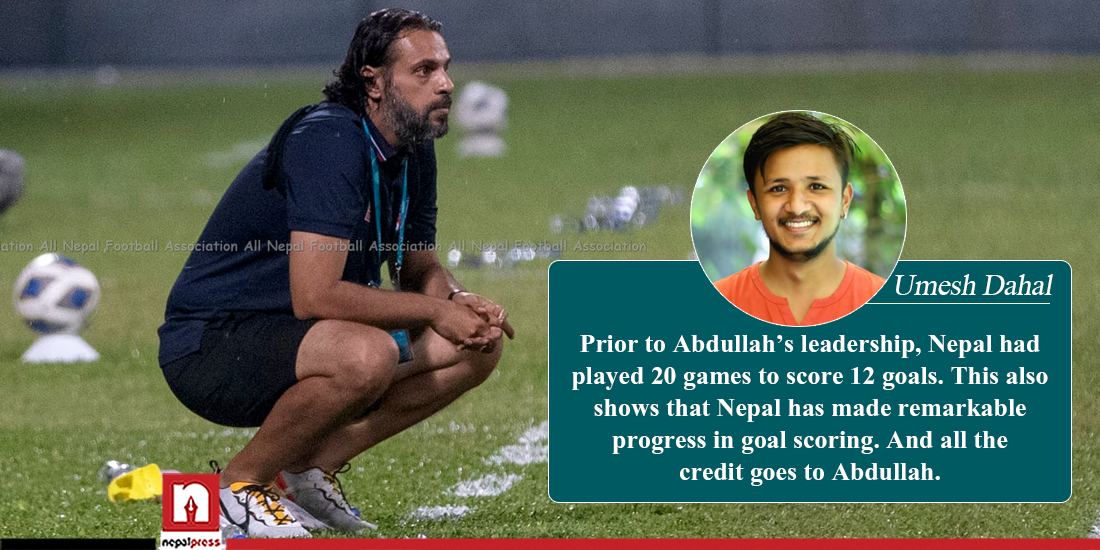 KATHMANDU: Ecstatic Nepali football fans erupted with joy when Nepal secured a nerve-shredding 1-0 victory against defending champion Maldives at their home turf in the SAFF Championship in 22 years on Friday.

Similarly, Nepal thrashed Sri Lanka 3-2 in their second match of the SAFF Championship on Monday.

The second straight victory in a row shows that Nepal has improved a bit in the finishing line which had been a topic of concern in Nepali football for a long time.

Hari Khadka and Nirajan Rayamajhi are the all time highest goal scorers for Nepal with 13 goals each.

Among the players who are in the Nepali national team at the present, Nawayug is on the top of the list of goal scorers with seven goals followed by Anjan Bistan with six goals. Bimal Gharti Magar, who is not in the national team for his leg injury and other various reasons, has scored eight goals so far.

Apparently, Nepal will have to wait for some time to get a new name in the list of top scorers. But, Nepal have made an improvement in goal scoring in recent time.

With the appointment of Abdullah Al Mutairi as the head coach of the Nepal national football team, Nepal broke their long goal drought.

During his first public appearance, coach Abdullah showed a shocking response and attitude.

Abdullah, who was moving ahead with an objective to take Nepal in the qualifying round of the Asian Cup and in the final of the SAFF Championship, is on the verge of fulfilling his one dream for now.

Nepal is not only playing the SAFF Championship in Maldives, but also showing extraordinary performances.

Nepal will reach the final for the first time in the history if they score only one point in the remaining two games of the ongoing round robin league system.

If everything goes well as planned, the dream of Abdullah to see Nepal playing the final of the SAFF Championship will be fulfilled.

Nepal have played nine games under the leadership of Abdullah. Of them, Nepal won three matches, settled for a draw in one match and faced a defeat in five games.

It should be noted that Nepal have played only one match against the weak team among the nine matches played so far. In the meantime, Nepal have achieved good results in some matches.

Though Nepal faced a defeat of 6-2 at the hands of a strong team like Iraq, Nepal were in a dominating mood in the beginning.

Abdullah had started to form his own team by changing 13 players from the team that played in the Three Nations Cup at home in April.

Most of the new players, who had gone to Iraq and Kuwait for the World Cup Qualifiers, are now the key members of the national team.

Manish Dangi, who scored the only goal for Nepal to hammer Maldives in their first match SAFF Championship on Friday, had made a debut in the match against Iraq then.

Once while responding to journalists before the match against Australia in the World Cup Qualifiers, Abudullah had said that if Macedonia can beat one of the strongest teams of the world like Germany then why not Nepal can play an attacking game against Australia. “People may call me crazy but we play attacking games,” he said.

But, when Nepal’s star midfielder Rohit Chand was slapped with a red card in the 45th minute, it was not possible to play the attacking game as planned by the coach.

Nepal, who were limited to 10 men after Nepal’s star footballer was slapped with the red card, faced a defeat of 1-0 against Australia who suffered 5-0 defeat in the first league of the World Cup Qualifiers.

After returning home, Nepal played two friendlies against India as preparations for the SAFF Championship.

However, Nepal failed to capitalise on the home ground as they played 1-1 draw against India in their first of the two international friendly matches played at the Dashrath Stadium in the Capital.

Out of 19 matches Nepal and India played so far, India have recorded wins in 13 matches, while Nepal managed to win just two matches. Nepal last defeated India 2-1 in the SAFF Championship in 2013.

Earlier, Nepal and India had played in 2015 at the Dashrath Stadium and the two teams played a goalless draw in the 2018 FIFA World Cup Qualifiers.

Earlier, Nepal had scored only three goals in nine matches.

Prior to Abdullah’s leadership, Nepal had played 20 games to score 12 goals. This also shows that Nepal have made remarkable progress in goal scoring. And all the credit goes to Abdullah.

He had taken a great risk to replace the players who had been playing in the national team for a long time with the young players. The young players are also giving their best to make the coach happy.