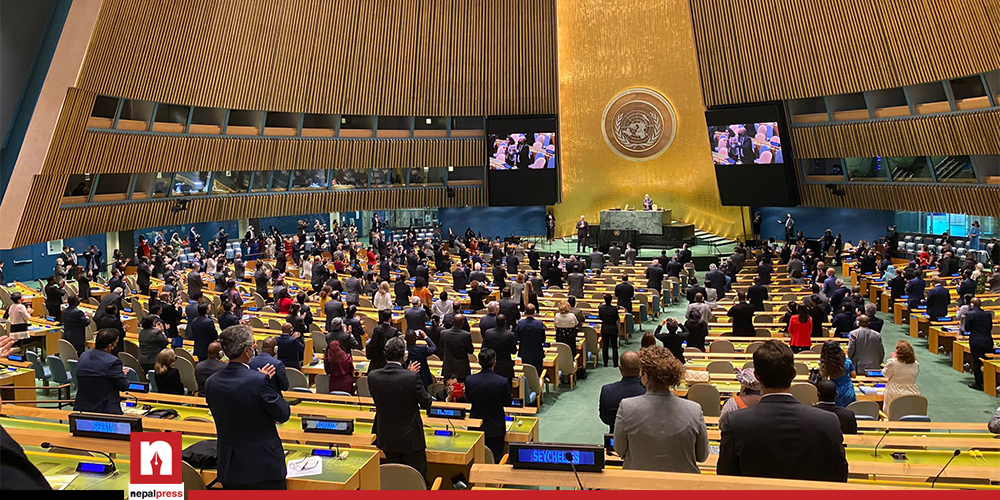 However, it has not yet been decided who will participate and address the UNGA on behalf of Nepal.

The main problem is Nepal does not have a foreign minister yet. It has been learnt that Prime Minister Sher Bahadur Deuba, who has been keeping the Foreign Ministry with himself, will not travel to New York to take part in the programme due to the Covid-19 pandemic.

There is a tradition that the diplomats from all over the world gather in New York every year and present the issues on behalf of their country.

But, Nepal has not yet decided the issues to be raised in the assembly due to the absence of a dedicated minister, affecting Nepal to establish itself in the international community.

The Ministry of Foreign Affairs said that there is a slim chance of ministerial participation in the assembly.

According to a source, Secretary at the Foreign Ministry Bharat Raj Paudel or Permanent Representative to the United Nations in New York, Amrit Kumar Rai will take part in the annual jamboree.

But, experts said that Nepal’s weak participation in the assembly will affect diplomatic relations.

The Ministry of Foreign Affairs has also not informed about the issues to be raised in a high-level meeting of the United Nations to be commenced from September 21.

Sewa Lamsal, spokesperson at the ministry, said that Nepal is carrying out homework to present itself in the assembly.

International media agencies have said that the powerful countries will give priority to the issue of Afghanistan this year.

Former Permanent Representative to the United Nations in New York Jaya Raj Acharya said that it will not make difference whether Nepal has a Foreign Minister or not.

“Our issues should be strong,” he said, adding,” I had led the Nepali delegation in 1994. I don’t think that we have to physically attend the assembly.”

On the other hand, the meeting is being held on the sidelines of the UN General Assembly in New York every year.

There is a doubt that the meeting of SAARC will take place this time owing to the recent developments in Afghanistan, the youngest member of the regional bloc. Afghanistan joined SAARC as its eighth member in 2007.

Since the Taliban took over the government of Afghanistan, India, a member of SAARC, has not given recognition yet while it has already been revealed that Pakistan had supported the formation of a Taliban government.

Nepal has adopted a neutral policy regarding the Afghanistan crisis.