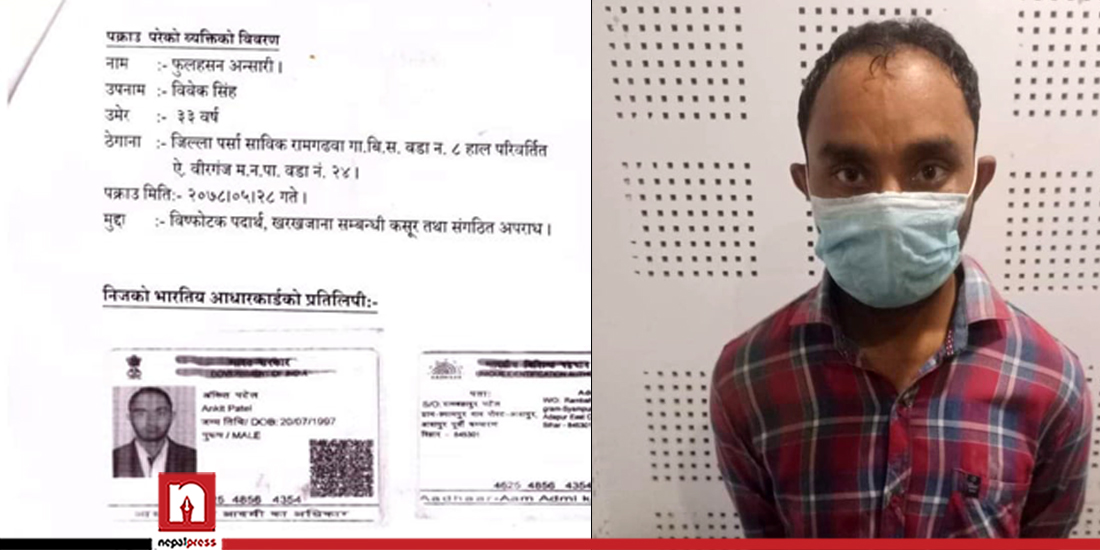 JANAKPURDHAM: Police have apprehended a man accused of masterminding twin bomb blasts in Birgunj two years ago and various other murder and extortion cases.

It has been learnt that he had been living in Muzaffarpur of India making an Indian Adhar  Card in the name of Ankit Patel by hiding his real identity.

Police arrested Ansari while he was heading towards his home at Ramgadhuwa in Birgunj.

According to police, he had planned to detonate two bombs near Birta Bazaar and Ghantaghar in Birgunj two years ago.

Police said that he along with his group had been extorting money by terrorising  businessmen of Birgunj.

Police said that he was planning to commit a crime in Birgunj within a few days.

Inush Ansari of Birgunj Metropolitan City-24 and Jaubad Ansari of the same place and Saddam Ansari, who were involved in the bomb blasts, were arrested with four rounds of bullets and explosive devices on August 21, 2019.

A case under Arms and Ammunition Act was filed against them.

The Parsa District Court sentenced them to two-and-a-half years in jail and imposed a fine of Rs 25,000 each. They are doing time in Parsa jail.

Ansari,however, had been absconding after the incident. Ansari is also involved in many other criminal incidents.