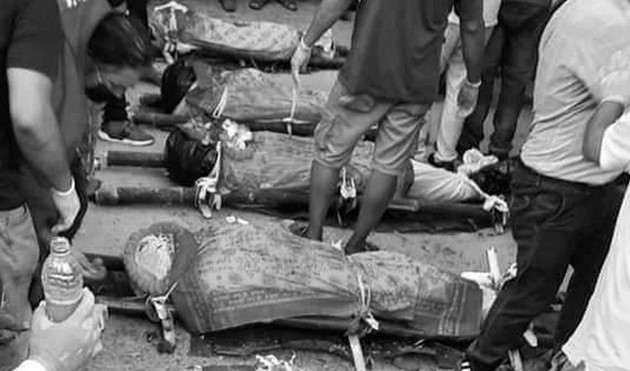 KATHMANDU: Six members of a single family were killed in Madi Municipality-1 of Sankhuwasabha district on Monday.

Police arrested Lok Bahadur Karki (25), a relative of the victims, for his involvement in the mass murder.

During the investigation, police said that infuriated Lok Bahadur commited the crime because of his personal vendetta against the family.

Though Lok Bahadur initially decided to kill only Tej Bahadur, he murdered other members of the family fearing that they might disclose the crime.

The incidents of mass murder have been increased in Nepal of late.

Police said that 25 mass murder have been recorded in the country in three years.

Earlier on June 10, 2020, five members of a family were found murdered at Tilotta Municipality-10 in Rupandehi district.

Among the deceased, Madhav Musahar, his wife Janaki Musahar, and Poshraj Musahar of Sainamaina Municipality-3 used to work at a daily farm belonging to Ram Bahadur Pun.

Police detained Jhasendra Sinjali, who used to work at the same farm, in connection with the case.

During the interrogation, Sinjali said that he killed them in a fit of rage as they used to trouble him over and over again at the workplace.

Similarly, nine members of two families were killed at Arubote in Miklajung of Panchthar district on May 16, 2019.

Sita Khajum (12) managed to survive the fatal attack. She was critically injured in the incident.

Man Bahadur Makhim, who was conspicuously missing since the attack, was found hanging a few days later after the attack.

Police, however, concluded that Man Bahadur committed suicide after killing nine members of the two families.

Man Bahadur’s wife has been found living in the parental house for a long time.

Police said that he killed them after his wife expressed her reluctance to come home.

Likewise, five members of a single family were murdered in Badikhel of Lalitpur 18 years ago.

Bhanu Nagarkot, his wife, two daughters and a son were killed by using a sharp weapon.

Police apprehended Chandra Bahadur Shrestha for his alleged involvement in the incident after 12 years.

According to the investigation, police said that Shrestha killed all the members of the Nagarkoti family on suspicion of having an affair with his wife.

These are just a tip of the iceberg.

The incidents of crime are increasing in all the seven provinces in recent time. It has been found that most of the crimes were committed in a fit of rage.

More than 25 mass murder were recorded in three years.

Police said that 91 persons were arrested from different parts of the country on the charge of committing mass crimes.

Meanwhile, police said that most of the crimes were committed for minor reasons.

Financial dispute, domestic dispute, property dispute and caste discrimation among others are some of the reasons behind committing the crime.

Psychologist Swastima Pokharel said that psychotherapy is essential for the youths to stop the mass killings.

“The main cause of mass murder seems to be mental problems,” she said.