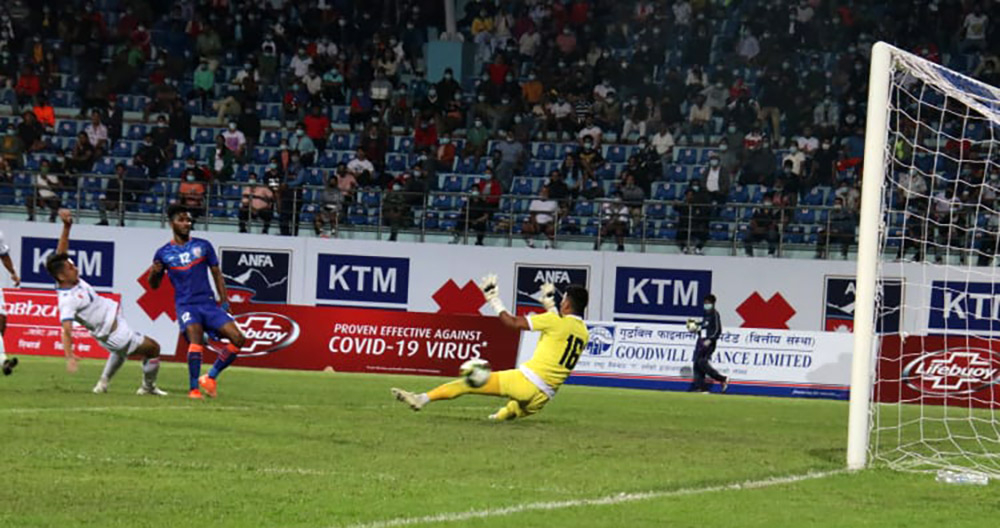 KATHMANDU: Nepal faced a 2-1 defeat at the hands of India in the second friendly match played at Dashrath Stadium in the Capital on Sunday.

Albeit Nepal national team played well, they were forced to face defeat due to poor finishing.

Hosts Nepal settled for a 1-1 draw against South Asian giants in the first of the two friendly matches played on Thursday.  The matches were played as part of their preparations for the SAFF Championship to be held in Maldives in October.

Though Nepal dominated the show from the beginning and piled immense pressure, the team failed in the finishing department.

They created many scoring chances but failed to hit the target.

This is the first time that India had played friendly matches in the Nepali soil. Nepal had played a friendly match against India in Mumbai in 2017. Nepal faced a defeat of 2-0 at that time.

Nepal and India had played 21 times so far, India have recorded wins in 14 matches, while Nepal have registered two victories. Nepal last beat India 2-1 in the SAFF Championship at the Dasharath Stadium in 2013.

Nepal and India last played at the Dasharath Stadium in 2015 and the two sides settled for a goalless draw in the 2018 FIFA World Cup Qualifiers.

The Indian national football team had arrived in Kathmandu on August 31 to play two international friendly matches against Nepal.