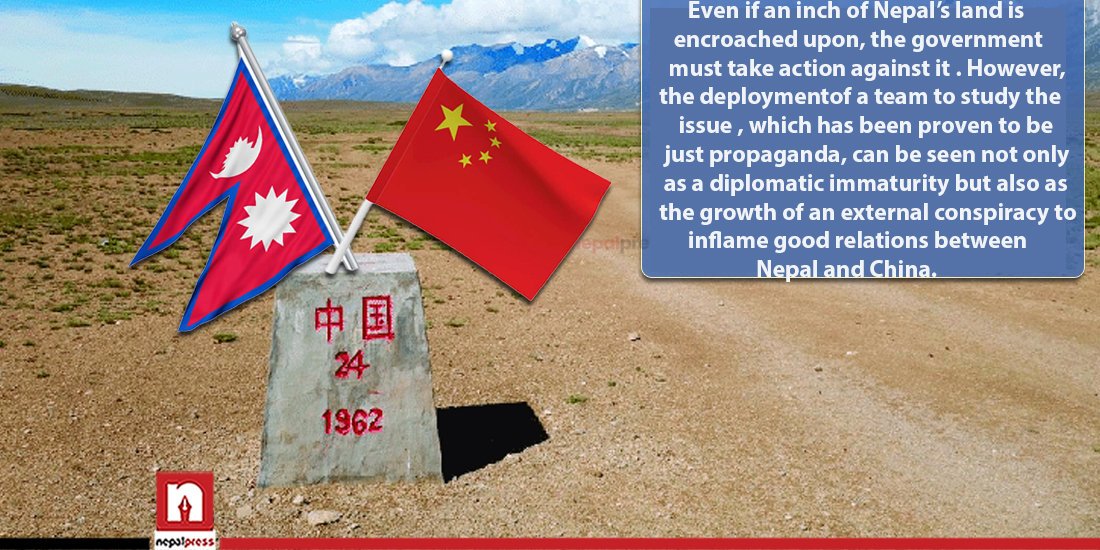 It was a historic day for Nepal and China when the two countries signed a border agreement on October 5, 1961. Nepal and China signed the border treaty during the then King Mahendra’s state visit to Beijing.

After signing the agreement, King Mahendra and Chairman of the Communist Party of China Mao held a conversation.

Mao: Your Excellency, have all the problems been solved?

Mahendra: Everything have settled

Mahendra: Yes, we have all agreed

The conversation held 60 years ago between King Mahendra and Mao has been published in the book titled Mao Zedong on Diplomacy.

This dialogue shows that both sides were satisfied with the historic border agreement between Nepal and China.

Around one-and-a-half-year ago, the then Prime Minister BP Koirala on March 21, 1960 inked a border agreement during his official visit to China. During his visit, both sides staked their claim to Mount Everest. Later on March 18, Mao proposed Koiral to divide Everest into two equal halves.

King Mahendra made the treaty as per the same agreement. The border dispute has not surfaced between Nepal and China since then.

But, the incumbent government led by Sher Bahadur Deuba has decided to form a committee to study the border issue with China, raising doubts in diplomatic ties.

A Cabinet meeting held on Wednesday decided to form a committee to study the border dispute in Namkha area of Humla that borders China.

Nepal Police, Armed Police Force personnel, survey department officials and experts on border issues will be in the team headed by the joint secretary of the Home Ministry.

It has been learnt that the government team will monitor the northern border area of ​​ward 5 and 6 of Namkha Rillage Municipality.

India unveiled a new political map on November 2, 2019 when KP Sharma Oli was the Prime Minister of Nepal.

People from all quarters of life started staging demonstrations after the southern neighbour included Lipulek, Kalapani and Limpiyadhura in its political map for the first time.

Later on November 21, the Oli government sent a diplomatic note objecting to India’s move. But, India turned a blind eye.

Around Six months after the map was made public, India on May 8, 2020 inaugurated a direct road to Kailash Manasarovar via Lipulek.

Later on June 13, 2020, the Oli government also made public a new political map of Nepal including Lipulek, Kalapani and Limpiyadhura as its territory.

After Nepal unveiled the political map, the Indian military chief publicly responded that Nepal had taken these steps at the behest of someone else, hinting to China.

Shahi and Karnali Chief Minister Mahendra Bahadur Shahi visited the Nepal-China border area in the second week of June. Shahi along with this team monitored the area again in September last year.

The then assistant Chief District Officer of Humla Dutta Raj Hamal had inspected the border before the team of Shahi.

Hamal told the media that China has encroached the land of Nepal. He claimed that the 11th pillar in the border area was missing.

When the Home Ministry on September 23, 2020 sought clarification from Hamal, he apologised publicly for his wrong statement.

Then Minister for Foregin Affairs Pradeep Gyawali had said that there was no border dispute with China.

At that time, then Chinese Ambassador to Nepal Hou Yanqi had expressed her grave dissatisfaction with the officials of the Ministry of Foreign Affairs.

Similarly, the Chinese Embassy on November 11, 2020 also sent a letter to the Nepali Congress expressing its dissatisfaction.

The Chinese side, however, has not made any public comment regarding a team formed by the Sher Bahadur Deuba-led government.

During a regular press conference, Arindam Bagchi, spokesperson at the Ministry of External Affairs of India, on Thursday said that the Ministry has no knowledge about the Darchula Tuin incident in Nepal.

A probe committee formed to investigate the Darchula incident submitted a report to the government on September 1, concluding that the Indian security personnel were involved in dismantling an improvised cable crossing locally known as ‘tuin’.