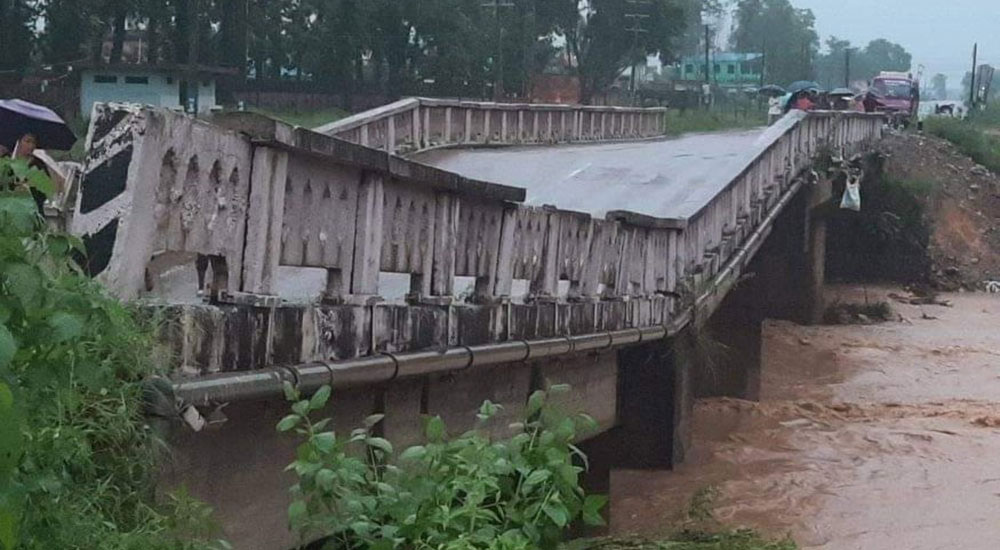 RUPANDEHI: Vehicular movement along the East-West highway has been obstructed after floods triggered by torrential rainfall damaged two bridges at Rupandehi and Nawalparasi districts.

These are just a case in point. Other bridges on the highway are also collapsing and submerging faster than scheduled.

The highway has been blocked after the middle pillar among the four pillars of the 61.4-meter long bridge at Ghodaha in Rupandehi was submerged.

The concerned authorities have two arguments for the collapse of the bridges. Some have blamed uncontrolled exploitation of riverine substances, while others have blamed it on overloaded vehicles.

The road division, which is the regulatory body of the highway, the entrepreneurs who have been protesting against the overload, the groups that are benefiting by excavating from the local rivers and the local government are blaming each other.

Yam Prasad Pandey, the coordinator of the Transport Entrepreneurs Committee, Lumbini, said that they have been drawing attention time and time again saying overload is the main cause of road deterioration and collapsing of bridges. He said that even though the administration and various levels of government were informed about this issue, due to negligence such problems were increasing in other places as well.

He argued that when the government allowed Indian vehicles carrying more than the capacity of the road to run smoothly, the bridges were washed away and the roads became dilapidated.

Jit Bahadur Bhat, general secretary of the Western Transport Entrepreneurs’ Committee, says that millions of rupees have been wasted due to the state’s inability to control overload.

He urged to pay attention to overload as it is the main reason for the dilapidation of roads and bridges.

“It is the responsibility of the regulatory body as it stops Nepali transport entrepreneurs but allows Indian overloaded vehicles to run ignoring the capacity of the road,” said Senior vice president of Nepal Truck Transport Entrepreneur Association Lok Raj Pokharel.

The road division has been responding to the preparations for the collapse of the bridges in the highway area while excavating in the foundation area.

The road division has been giving prepared answers to the collapsing of bridges which is due to the excavation in the foundation area.

Jayalal Marasini, the chief at the Division Road Office in Butwal argues that the main reason was the removal of unnecessary riverine material from the 50-year-old foundation area of the bridge and allowing overloaded vehicles to run on the road.