6 years on, quake victims of Chitwan are still living in temporary shelters (With video) 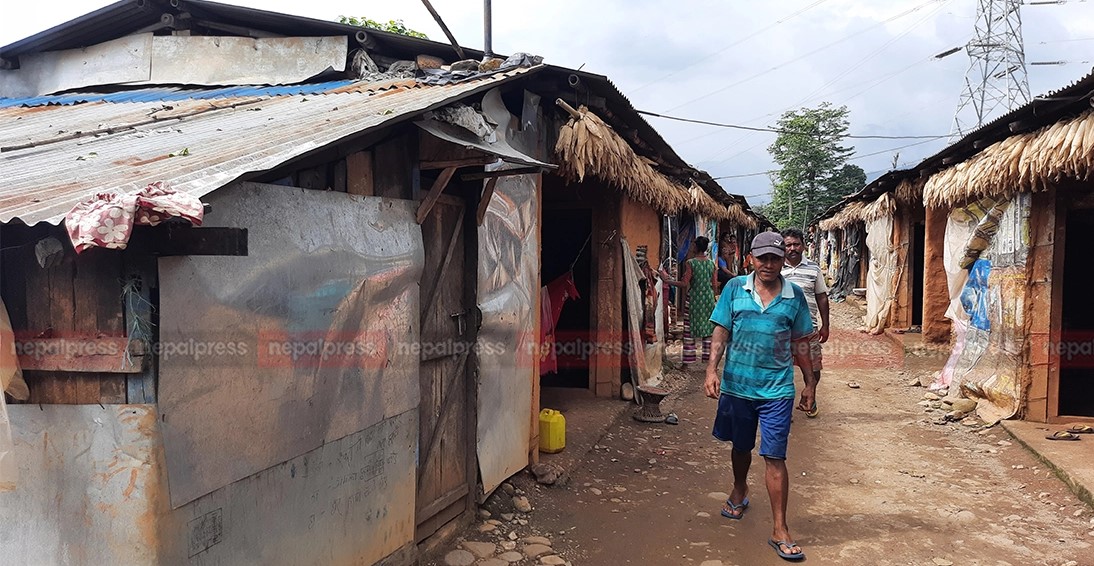 CHITWAN: People of Chaubisghare, Ichhakamana-2 of Chitwan, who were displaced by the devastating earthquake of 2015, are still living in shanties.

The district administration office relocated 24 families of Bishwokarma Community to a safer location in Jutpani, Kalika-8 after the landslide posed a grave threat to the settlement.

Bir Bahadur and Madan Bishwokarma have been struggling day and night to earn bread and butter for their family of 19 members. Bir Bahadaur and Madan have eight and 11 members respectively in the family. They have still been living in the tents. 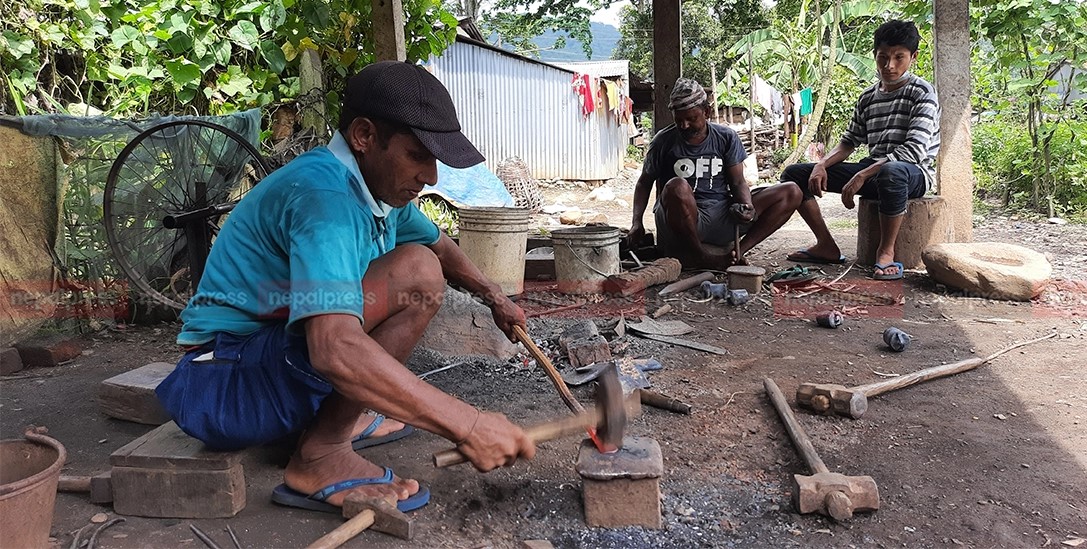 “We would be happy if we have a place to live and a place to work,” Madan said, adding, “We are having a hard time to manage basic needs for the family.”

The then Chief District Officer (CDO) of Chitwan Man Bahadur BK and leader Krishna Bhakta Pokharel among others had played a role to shift the settlement of Guchiwang.

Manmaya Bishwokarma’s anxiety level goes up when it rains. She said, “The water gushes into our room when it rains and have to throw the rainwater out of the room which takes a lot of time.”

“Six years have already been passed but we are still living in the temporary shelters,” she said.

Manmaya came to this place abandoning her five kattha land due to the threat of landslide.

Kesharlal Bishwokarma lost her mother in the devastating earthquake. He said that the earthquake also destroyed his house which was constructed at the cost of Rs 600,000.

Kesharlal said that his mother died when the quake flattened their house while they were sleeping.

The Rural Reconstruction Nepal had constructed 24 makeshift houses. Tika Bahadur Bishwokarma lamented that they have been treated not even like Bhutanese refugees. 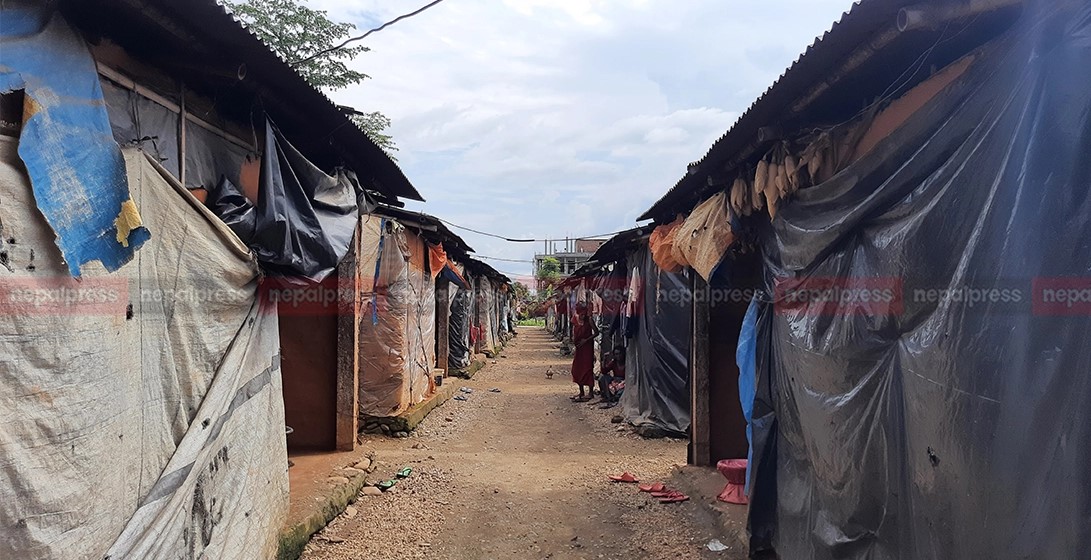 “The government has been taking care of the Bhutanese refugees but noone is giving importance to us,” he said. “Neither we have a toilet nor the government facilities,” Kesharlal added.

He said that the government should give them 10 dhur land to make permanent houses. He said that there are 200 people in the chaubisghare settlement. Around 35 young people do labour works.

Kesharlal further said that around 30 students study in a nearby school at Jutpani and 25 students at Prithvi High School which is about half-an-hour away.

“We requested the local government over and over again in the past for permanent settlement, but to no avail,” he said. “Is it not the responsibility of the government to take care of its citizens,” he questioned. 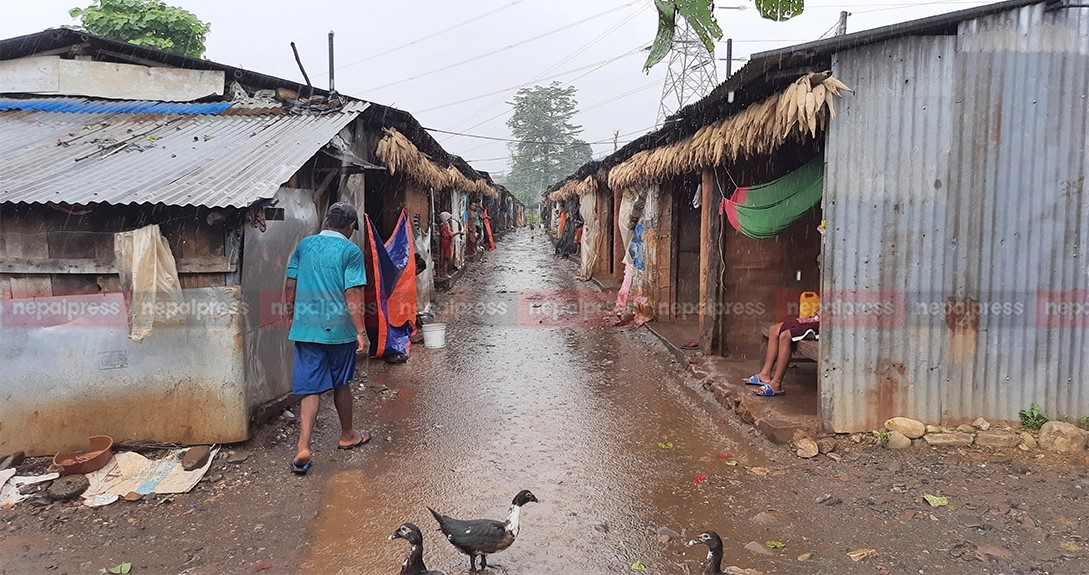 “We had tried to shift the settlement to Pipalata but they refused to go there,” he said, adding,” Now, we have told the Ichhakamana Rural Municipality and Kalaki Municipality to resolve the issue.”

Sujan Nepal, Engineer at the Chitwan Project Implementation Unit under the Resconstruction Authority, said there is a challenge to manage the Guchiwang and Koyalghari settlements.

An all-party meeting of the District Administration Office and political parties had shifted them to an open ground in Guchiwang prior to the establishment of Reconstruction Authority.

Dallakoti said that 101 households of eight settlements, which are at high risk of landslides, are in the beneficiary list.