Why Oli decides to adopt utmost flexibility for party unity? 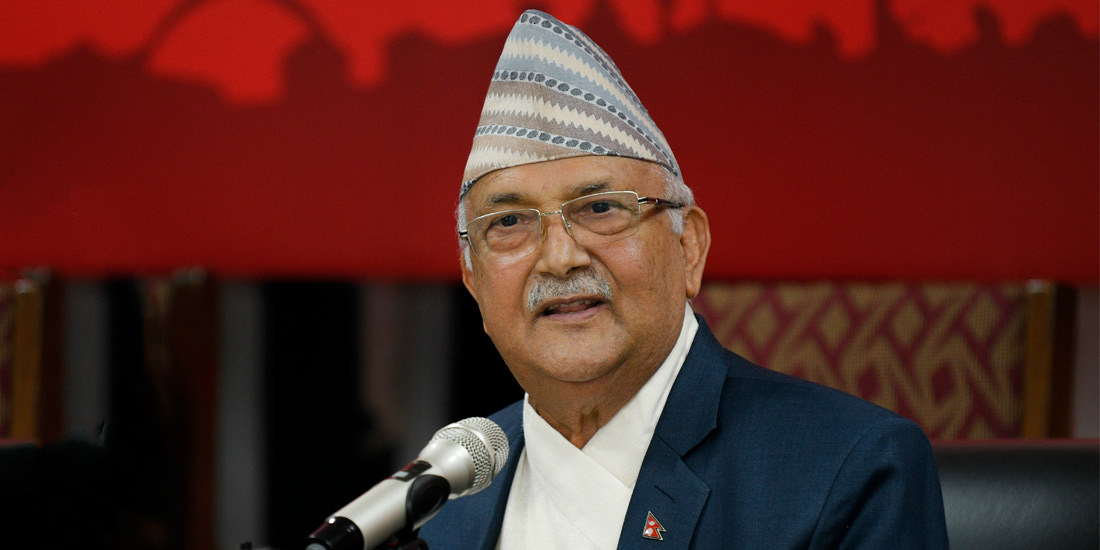 This was the first time he addressed the public programme as the Chairman of the party after he was sacked from the post of Prime Minister by the Supreme Court’s July 12 mandamus order.

He had been floating differing views at the Central Committee (CC) meeting being held at the Chyasal-based Tulsi Lal Smriti Pratisthan in Lalitpur for the past three days. Oli had been using vengeful and bitter words against Madhav Nepal and CPN (Maoist) Chairman Pushpa Kamal Dahal especially after he lost the PM post following Supreme Court mandamus order. But, the scene was different this time.

During this address, Oli neither used vengeful and bitter words against Nepali Congress President Sher Bahadur Deuba and Dahal nor against Nepal-faction lawmakers.

Instead, Chairman Oli said that he would forgive their (lawmakers who voted for Prime Minister Deuba during the floor test) past mistakes and would welcome them if they wanted to come back and strengthen the party.

“I will like to grant amnesty to all the friends who had lost their way and acted against the party,” he said. “Let’s try to resolve the dispute and take initiative to hold discussions for party unity,” Oli added. This was against his normal behaviour.

Chairman Oli used to use vengeful and harsh words against party senior leader Madhav Kumar Nepal in the past.

Two days after the Supreme Court’s mandamus order on July 14 that removed him from the post of Prime Minister, Oli shifted to his private residence in Balkot, Bhaktapur from Baluwatar.

Addressing the party cadres from the balcony of his house the same day, he announced that Nepal had no place in the party. Oli vented his ire against Nepal for helping the opposition parties to topple his government. Nepal had supported NC President Sher Bahadur Deuba in his bid for prime ministership and also challenged Oli’s move to dissolve the Parliament in the Supreme Court.

Earlier on June 30, Oli, during a programme organised in Baluwatar to mark the 70th birth anniversary of Madan Bhandari, the then powerful general secretary of the CPN-UML, accused Nepal of being a cadre of of Deuba and a follower of Dahal. Oli said that Nepal could join Deuba’s party anytime soon as he has been supporting the latter in his bid for prime ministership.

The Central Committee meeting of party that concluded on Thursday decided to adopt utmost flexibility to incorporate all the three leaders including Nepal. Talking to journalists after the meeting, UML spokesperson Pradeep Gyawali said,” “The party chairman has said that he will forgive their past mistakes and will welcome them if they wanted to come back and strengthen the party.”

Oli could have taken action against the 22 lawmakers who had voted for Deuba during the vote of confidence from the meeting but he did not do so. Central member Bishnu Rijal said that the meeting did not dwell on taking action against the lawmakers. There are some reasons behind it. Now, Oli is just the Chairman of the UML not the Prime Minister of the country. He has nothing to lose as he had already lost everything that he had in the past because of Nepal.

During the briefing at the CC meeting, most of the province committee chairmen opined that the UML would have to face a hard time if the Nepal-faction did not join the party. Most of the senior leaders of both the faction are against the party division.

“I will warn Deuba and Dahal not to dream of issuing an ordinance to divide the UML and to file an impeachment motion against the President,” he said.

As Deuba had garnered 165 votes in the 271-member Parliament, he doesn’t need more votes to file impeachment motion against the President. That is way, Oli said that he would adopt utmost flexibility as he cannot see Bhandari being removed from the post of President with the help of his party lawmakers.

During the CC meeting, Oli had also said that he is ready to nominate Nepal as the second chairman of the party.

Oli clearly knows that Nepal will come to the negotiating table only after resolving the issue of power sharing.

Meanwhile, second rung leaders of the UML are trying their best to bring Oli and Nepal to the negotiating table. They wanted Oli and Nepal to resolve the issue of power sharing by themselves. That is why, Bhim Rawal is playing the role of negotiator.

Leaders Subash Nembang and Bishnu Paudel among others from the Oli-faction are also piling pressure on Oli to take initiative to make the party unity intact.

On top of that, lawmakers of both the facion have started a campaign to pressurise the leadership to initiate the process of party unity.