Protest against one rupee price increment in petrol, silence over hundred rupee increase in edible oil 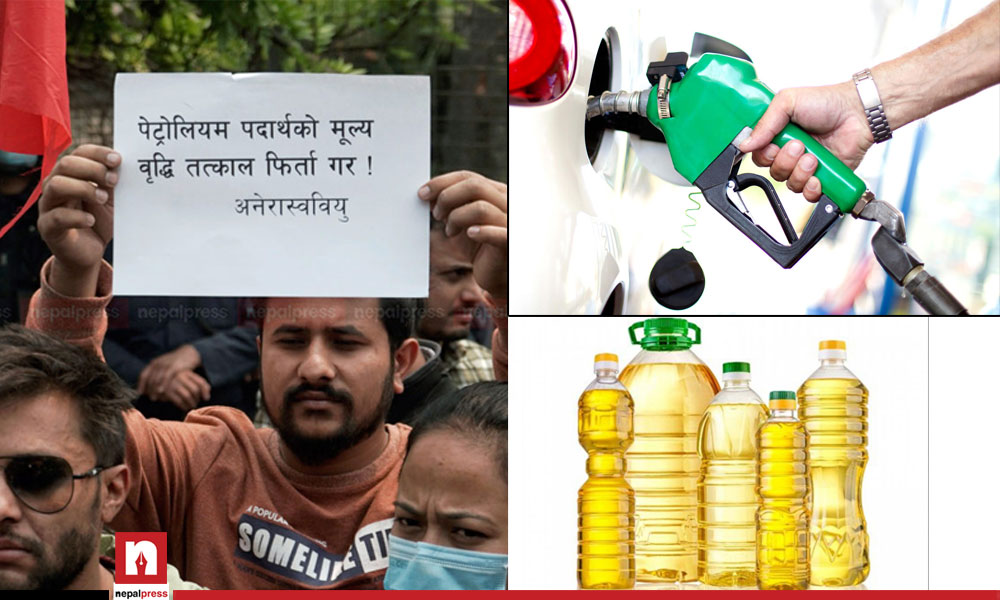 Compared to petrol used for leisure by those having relatively strong economic situations, why isn’t there a voice raised when the price of cooking oil, which is mandatory to be used every day in the kitchens by the common people, has gone up dramatically? The Chairman of the ANNFSU, affiliated with (CPN UML), Sudesh Parajuli said that the question is justified, we will also raise our voice on this issue and demand a reduction in the price to the concerned ministry.

President at National Consumers Forum, Prem Lal Maharjan, said that it is sad that the student leaders saw the rise in the price of petroleum products but did not see the rise in the price of edible oil. He said, “Student leaders will only do things for their own benefit.” They are protesting because of political interests. Now the Nepal Student Union does not protest as it has its own government.

Maharjan said that he has been raising his voice against the recent rise in the price of edible oil. But he complains that the producers and the government have not listened to the rights activists.

According to the Nepal Retail Trade Association, the prices of Mustard oil, soybean oil and sunflower oil have been increasing by Rs 80 to Rs 100 in the last year.

The union had also lodged a complaint with the Department of Commerce, Supply and Consumer Protection Management (DoCSM) alleging that the price of cooking oil had gone up. After receiving the complaint, the department had asked the oil producers to submit the reasons for the price hike.

Out of about 20 industries, all had given reasons for the price hike. The department had also taken action against three oil-producing industries for raising the price of oil without any reason.

The prices of daily necessities have gone up unnaturally in Nepal due to the recent prohibitory orders. Consumer activists have accused the government also is the reason behind the price hike.

How many people use petrol?

According to the NADA Automobiles Association, 10 per cent or 3 million out of 30 million Nepalis use two-wheelers, which is a group having good economic conditions.

Similarly, 0.9 per cent or 270,000 people are using four-wheeled vehicles while 89.1 per cent of ordinary Nepalese people use public transport. Maharjan, a consumer activist, says that it is not right for the student organization to remain silent when the price of cooking oil, used by the general public, has gone up even more than the price of petrol, which is mostly used by those of higher economic status.