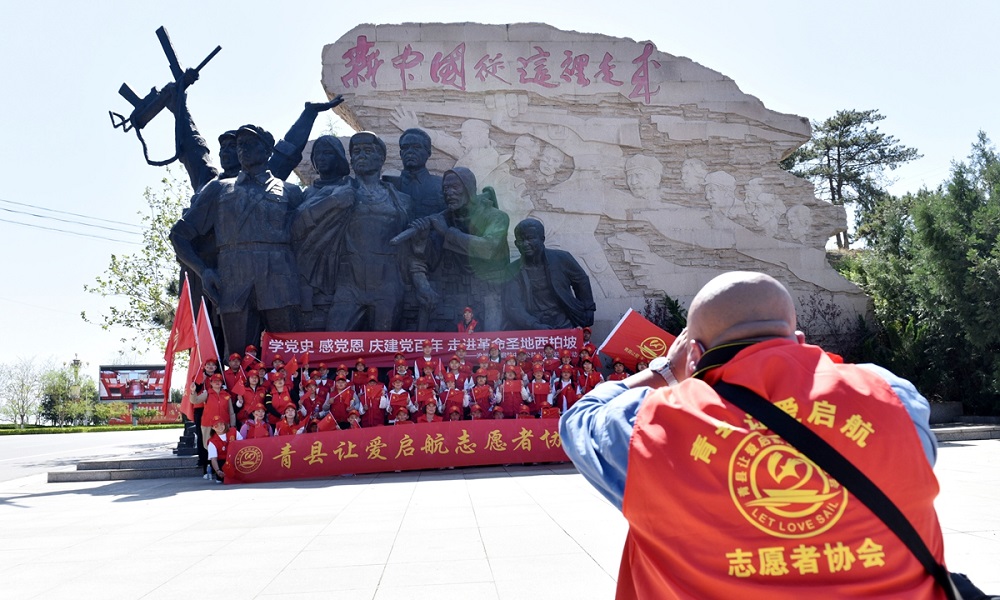 Currently, red tourism is very popular in China. Here, Red Tourism has given a new shape to the domestic tourism market.

Red Tourism, which is popular in China, has been covered by various media houses from Indian newspaper Indian Express and South China Morning Post in Hong Kong to the US world channel CNN.

What is ‘Red Tourism’?

The Communist Party of China was born on 1st July 1921. Born in Hunan Province, Chinese leader Mao Zedong founded the party at the age of 27. Six years after the establishment of the party, the People’s Liberation Army was established.

The People’s Liberation Army fought a battle with both armies – of the then Chinese ruler Cheng Kai-Shek and the Japanese colonial power. The People’s Liberation Army, which fought with both the Japanese and Kai-Shek forces before World War II, fought a decisive battle after World War II. And, four years later, on 1st October 1949, what is now known as China was occupied.

Arriving in Tiananmen Square in Beijing, Mao announced the establishment of the ‘People’s Republic of China.’ So far, the Chinese Communist Party has remained in power. The once ordinary country is now the world’s second largest economy.

The nation has now reached a level of competition with the United States, and has succeeded in expanding its influence from the ground up to space.

It is this overall travel package covering historical events, characters, environments and places that is referred to as the ‘Red Tourism’ developed by China. The package was launched to introduce the new generation of Chinese people to the party’s history through tourism. This year marks the 100th anniversary of the founding of the Chinese Communist Party, and its promotion has become widespread.

Long routes traveled by the Chinese People’s Liberation Army also fall under Red Tourism. According to the Global Times popular red tourism urban destinations include Beijing, Nanjing and Shanghai, and spots include Tiananmen Square, the Chinese National Museum, and memorials to the first general convention of the Chinese Communist Party.

To keep the tourists entertained, the Chinese army has put up a variety of gift items, including plays and paintings depicting clashes between the Japanese and Cheng Kai Shek. Bloomberg QuickTech has shown through video content that there are red colored strawberries for sale in many spots.

According to international media reports China’s red tourism, which has been in the spotlight since 2004, has expanded since Xi Jinping became president.According to the Chinese newspaper Global Times, 100 routes have been created for red tourism in China. On May 31, China’s Ministry of Culture and Tourism unveiled the “100 Best Red Tourism Routes.”

According to Global Times, there are more than 200 spots under Red Tourism. Of these, only 39 spots are in large and second tier cities. All the others are in small villages and towns.

Along with the Chinese government, the private sector is equally active in promoting red tourism. China’s railway department has created a ‘red lines’ route to promote red tourism. Similarly, red tourism routes have also been created in the Chinese air transport sector. According to Global Times, China Eastern Airlines, Chengdu Airlines, Hainan Airlines and China Southern Airlines are providing the service. According to the Global Times, the main seasons for Red Tourism are June and July.

150 billion dollar contribution within one year

The craze for red tourism, which has been aggressively promoted by the Chinese government and the private sector, is growing, according to media reports from various countries. According to recent figures released by the Global Times, Red Tourism has contributed 74.5 billion to China’s economy in 2020.

According to CNN, China’s largest booking agency Ctrip aims to attract 50 million tourists by 2021. After COVID-19, the best enthusiasm in China is seen in the Red Tourism sector.

CNN quoted Mimi Li, a professor at Hong Kong Polytechnic University as saying that by 2020, Red Tourism would account for 11% of China’s total domestic tourism. According to CNN, 100 million people visited the Red Tourism region in 2020. This year marks the 100th anniversary of the founding of the Communist Party of China.

To manage the human resources of the Red Tourism sector, the Ministry of Tourism of China selects 100 guides from all over the country every year and takes them to Beijing to make them capable for the role through training. CNN writes that China has been discussing the improvement and discussion of red tourism by selecting the best 5 out of 100 guides.

Those who disagree with China are accusing Red Tourism of not promoting true history. CNN has been making critical remarks: “Even if the tourist destinations are correct according to history, tourists are only told one-sided stories.”

Critics have questioned museums’ information about Chinese citizens’ resistance to Japanese encroachment. According to the museum, the then ruling party, the Kuomintang, was unable to fight off the Japanese.

It is mentioned that the victory was due to the sacrifices made by the Chinese People’s Liberation Army. Citing this as an example, CNN quoted various experts as saying that history was one-sided.

The Indian newspaper Indian Express has also written that only the good side has been included in the red tourism sector, by hiding the bad deeds and failures of the Chinese Communist Party and its leaders.