Impact of floods in Sindhupalchowk

Melamchi water supply to not resume before Dashain

Technicians could not reach construction site for 15 days 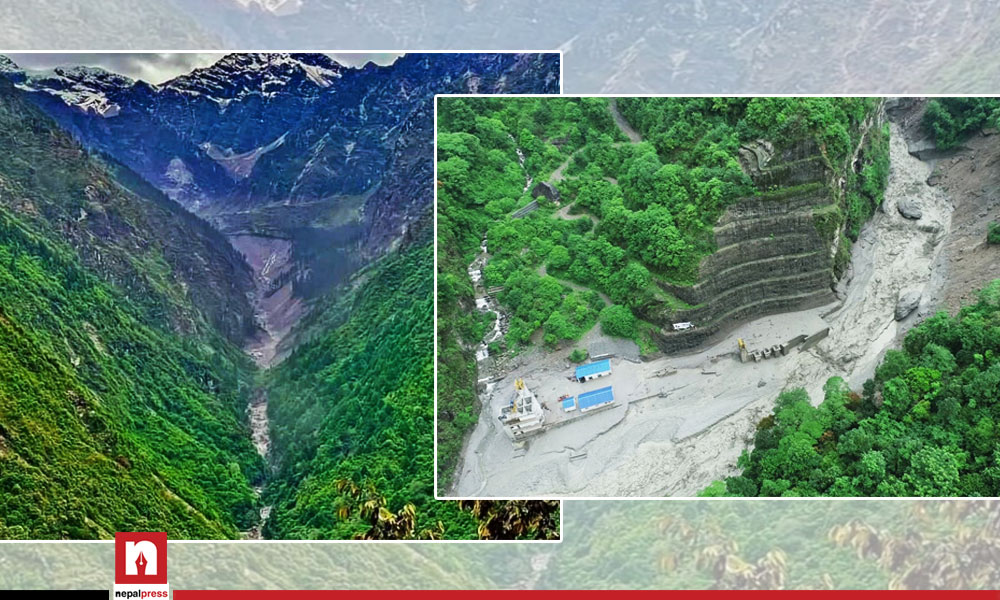 The supply of water from the source was stopped from 15th June due to the incomplete tunnel testing procedure. The floods in Melamchi on the same night have caused great damage to the project.

Heavy rain had lashed the upper part of Helambu village municipality -1 of Sindhupalchowk on 15th June. The condition of the Melamchi Drinking Water Project site became disastrous when the river was blocked by a landslide in Bhremathang due to heavy rain. The floods have caused more than Rs 1 billion worth of damage to the Melamchi project, which was stopped from 15th June due to the need to complete the tunnel testing procedure. The floods in Melamchi on the same night have caused great damage to the project. It is unknown when water distribution will resume in Kathmandu.

Supply to not resume until Dashain

Officials of the project say that it has not been decided when the water supply of Melamchi will be resume. He said that the people of Kathmandu are not likely to get Melamchi water this time.

Spokesperson of the Melamchi Drinking Water Development Committee Rajendra Pant told Nepal Press that it would not be possible to bring drinking water to Kathmandu before the end of the monsoon. He said that there is no possible situation to bring it now.

Panta expressed “The possibility of Melamchi water supply before Dashain is low. If there remains flood till mid-august, we can’t supply Melamchi water in Dashain.”

Even 15 days after the flood, technicians have not been able to reach the Melamchi drinking water source.

The main work area of ​​Melamchi, which is under construction, is in Helambu village municipality. The technical team of the project has not been able to reach the headworks as the floods have washed away all the bridges and roads leading to the headworks.

The project is discussing to pave the way with the help of various agencies and local government and arrange the necessary budget after estimating the damage.

The project staff returned halfway three times as there was no way to reach the headworks. The Melamchi Drinking Water Development Committee has stated that the technical team could not reach the headworks after the road network was flooded.

The flood has buried 10 to 15 meters of the project’s headworks. The headworks have been filled with sand and stones brought by the floods and all the structures have been washed away.

Rajendra Pant, the spokesperson of the committee said “As the road network is broken, it is not possible to take large equipment to the source to prevent floods,”.

He says it is not possible to say how much damage is there inside the main structures of the headworks as it is buried inside.

There could have been more damage!

The water supply started in a hurry without any successful test of the tunnel. After distributing water for two and a half months, the project closed the tunnel on 15th June to complete the test work, which saved a lot of money.

The flood has blocked the last point of the tunnel in Helambu. “As the road network is broken, it is not possible to take large equipment to the source to prevent floods,” he said. The Ambathan tunnel has been blocked due to flooding.

Committee spokesperson Pant said, “It is not possible to evacuate the Ambathan tunnel as the Melamchi river flood has blocked it. We are clearing the tunnel from Sundarijal.”

You have to get there first to clean the tunnel of Ambathan. But there is no way to get there. The project has not been able to bring large equipment as there is no bridge. The tunnel has to be cleaned by bringing equipment on the dozer.

The first attempt of the project is to move forward by repairing bridges and roads. Spokesperson Pant said that after reaching there, they will clean and inspect the Ambathan tunnel.

Project staff are confused as there is a possibility of another flood in Melamchi. Spokesperson Pant said that the work can move forward only after the end of the monsoon season.

He said, “It takes time to clean and inspect the Ambathan tunnel. The rainy season lasts for that period. After the end of the monsoon, clean water starts flowing in the Melamchi river and we can supply water as before.”

The project staff is hoping that the water can be supplied by cleaning the diversion of the headworks in an alternative way. The committee is discussing the construction of roads and bridges in coordination with the Road Department, Nepal Army, local village councils and wards.

The staff of the project says that if the construction of road and bridge work is done by the Nepal Army and Road Department, they can go there and work.

The road construction was inspected by the Nepal Army. There was a discussion once that the Bailey Bridges owned by the Road Department could be maintained. Three workers died and eight others are still missing after the floods on the night of 15th June.