The fight for unavailable vaccines: Lobbying from teachers to petrol pump employees 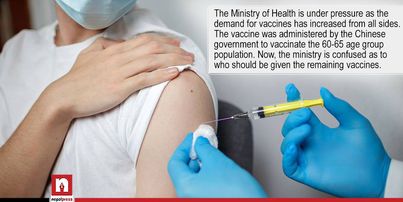 KATHMANDU: The driver and co-driver of the petroleum company blocked the service on Sunday saying that they had not received the vaccine against COVID-19. On Monday, the Nepal Oil Corporation (NOC) promised to provide the vaccine after getting a warning from petrol pump employees to protest further if they do not get the vaccine immediately. The transportation service was started after an agreement between the workers and the corporation. And, on Wednesday, two hundred drivers and co-drivers were vaccinated.

The corporation has written to the Ministry of Health through the Ministry of Industry and provided the vaccine. Transport, restaurant entrepreneurs and workers had reached the ministry on 14th June and requested the former Health Minister Sher Bahadur Tamang to provide the vaccine. Tamang expressed his commitment to providing vaccines to all on a priority basis.

Earlier, the former Minister Tamang had understood the memorandum of the Nepal Sports Federation and said that he would give priority to the people working in the front line to get vaccinated against COVID-19.

Since last January, the National Teachers Association had requested all teachers and school staffs to be provided with the vaccines. The teachers’ union had demanded that they be included in the priority list for vaccination against COVID-19.

The association has been drawing the attention of the government to provide vaccines time and again as they have to connect with students at the forefront and teach.

The Ministry of Education, Science and Technology has said that further initiatives are being taken to provide vaccines to teachers and school staff. However, even after five months of the demand, the teachers have not been able to get them vaccinated.

Former Health Minister Tamang was also understanding the memorandum and saying that vaccination would be given priority. Currently, the Ministry of Health is distributing vaccines to the target groups.

Health Minister Tamang before losing his position on Tuesday said three or four organizations had been demanding vaccinations. Some have disrupted essential services, while others have warned that services will be disrupted.

The Ministry of Health is under pressure as the demand for vaccines has increased from all sides. The vaccine was administered by the Chinese government to vaccinate the 60-65 age group population. Now, the ministry is confused as to who should be given the remaining vaccines.

There is pressure from all sides, you will not get vaccines just because you protest: Ministry of Health

The ministry has also clarified that vaccination will not be provided as a result of the protest.

Joint Spokesperson of the Ministry Dr Samir Kumar Adhikari, on the other hand, asks, “If all the people join the movement, how will we bring the vaccine?”

Stating that all the agitators need vaccines, he said that efforts are being made to bring vaccines and they will be distributed on a priority basis.

Who is the priority now?

It is uncertain who will get the vaccines provided by China after the vaccination of the targeted beneficiaries. According to the Joint Spokesperson of the Ministry, a procedure has been formulated to apply the vaccine to all groups as soon as it is received. But, it does not mean the decision to provide or not to provide vaccines will be made without its availability.

One million doses of the vaccine provided by the Chinese government have been given to those over 60 years of age, but the remaining vaccines are kept for the second dose.