How far will the Winning Machine Italy go? 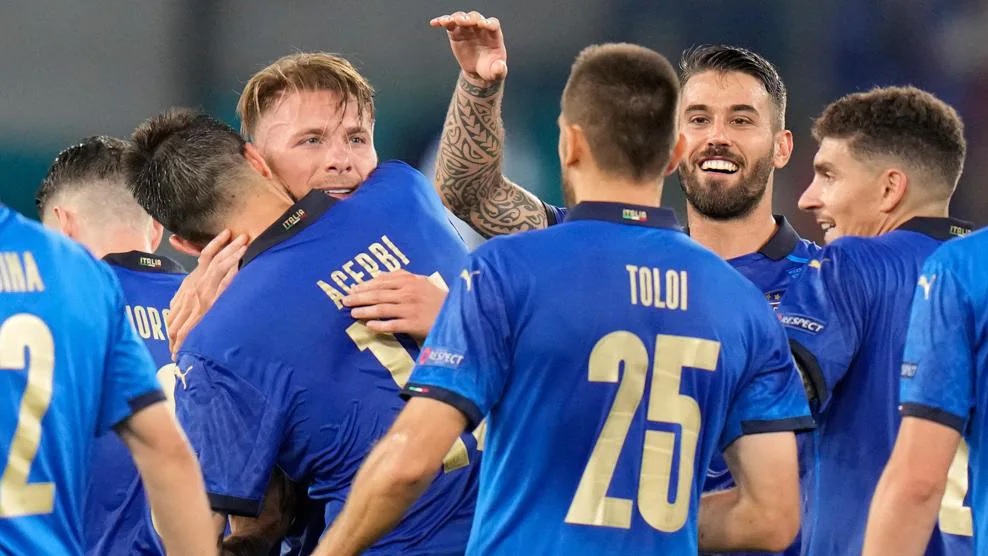 KATHMANDU: The Italian team, led by head coach Roberto Mancini, became the first team to secure a place in the knockout stages of Euro 2020. And, of course, this is not an unexpected success for the Azzurri which is in good form this year. Italy, who have scored 30 goals since conceding their last goal, beat Switzerland on Wednesday night to win 10 games in a row.

Not only that, Italy, which is in great form, has scored 59 goals in the last 19 games and has conceded only three goals. Currently unbeaten in 29 games, the team has scored 80 goals. Thus, their hunger for the title is a given. Although all the stats are in their favor, the question arises as to how far Roberto Mancini’s team will go as the competition progresses.

‘Azzurri’ is the ‘Winning Machine’

For the first time since losing in the Euro 2012 final, Italy has won the first two games with the score of 3-0 each in the European Championship. Italy, who made a great start against Turkey in the opening game of the Euro, repeated the same result against Switzerland in the second round.

After two consecutive victories at the group stage with 3-0 margin, The Azzurri proved why they were considered as title contenders even before the tournament kick off.

“They have been in control of the game from start to finish. Big countries are amazed at what they do when they don’t have the ball possession. But on the offensive side, they are a very good team,” said former Everton Midfielder Leon Osman.

“They are the Winning Machine. However, Italy has not played with a really strong team for them to be put to real test. If you evaluate Italy in terms of competition, they have yet to be tested. It remains to be seen how Azzurri will play against the big teams.”

“What I like most about this team is their style of attacking. But what they are doing with the ball and how they are playing from the back is a display of their willpower to achieve something. When the best players are on the team, there is hunger and a strong desire to reach the destination,” Keane said.

“There were a lot of expectations from the team before the game against Switzerland, but now the expectations have increased further. Guys, fulfill our dream by playing with this attitude”, said Gianluca Zambrotta, who had reached the Euro 2000 finals from the Italian team.

Italian Coach Mancini commented positively on his team’s performance, which has led Group A comfortably, also saying they would be facing more challenges ahead.

He said “There are teams like France, Portugal and Belgium in the European Championship. One of them is a World Cup winner, one is a European champion, and the other team is at the top of the world rankings,” he explained, “These teams have been formed over the years, and they are still ahead of us. But, this is football, anything can happen here. Nothing can be ascertained.”

“All the games are challenging. You have to go to the field and play. I am lucky to have a lot of good players in my team. They love to play, they enjoy and dare to take risks. The credit for all this goes to the players. I have tried to explain my thinking and process to them. There is still a long way to go.”

Is everything going according to plan?

Will Italy have the same offensive ability in knockouts? Time will tell. However, one small thing has been seen against Mansini’s team.

Ciro Immobile has scored consecutive goals in the last three games he played for Italy answering all questions raised before the tournament about his international goal scoring record. Likewise, Mancini was tense after key Midfielder Marco Verratti suffered an injury and was ruled out for the tournament. However, Manuel Lokatelli, who got a chance to replace Verratti, proved to be the ‘star of the show’ scoring two goals in their last match against Switzerland.

The only tragedy for the dominant Italian side was the forced substitution of the captain Giorgio Chellini in the 24th minute of the match after undertaking an injury. Azzuri’s captain was replaced by Francesco Acerbi due to a possible hamstring injury.

“This is a subject of concern. Let’s hope he doesn’t have a critical problem. However, leaving the field at the age of 36 with an injury is not a good signal for the overall competition,” said former French International Midfielder Patrick Vieira.