Death of Sabita Bhandari: Case in Court, Rhetoric on YouTube 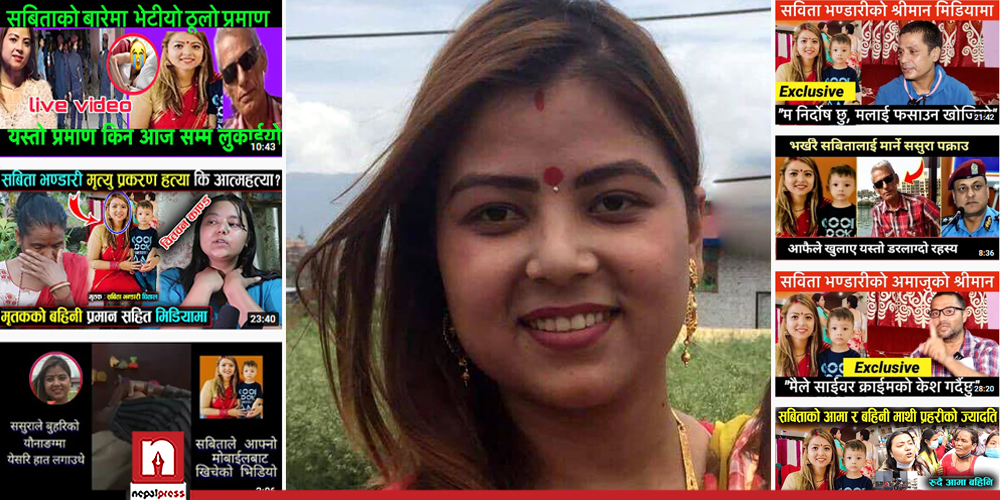 KATHMANDU: Two weeks ago, a woman suspiciously died in Chitwan. Claiming that the death of 28-year-old Sabita is not natural, her relatives lodged a complaint with the police. The case is pending in the court. But now, various statements being given by many related to this incident are going viral on YouTube.

Not only this, sensitive content such as audios and videos of Sabita have also been posted on YouTube. There is another group of people trying to get viral on TikTok by lip-syncing to those audios and videos. The police administration has not shown much interest in controlling such malpractices.

Sabita was engaged to Yogendra Kumar Dhital of Chitwan in April seven years ago. She has a husband, father-in-law, mother-in-law and a five-year-old son. Sabita was found hanging inside her own room on 17th April. His family and neighbors took her to Chitwan Medical College, where she was pronounced alive. However, doctors could not save her life.

According to her relatives, Sabita had been under stress for a long time due to family reasons. Sister Sajani said that she had been harassed for not bringing dowry during marriage. She also said that her family forced her to take medication for mental stress. However, Mr. Yogendra claims that his wife really was suffering from mental problems and was taking medicine on the advice of a doctor. According to his claim, Sabita was suffering from mental stress from the time of her marriage.

After listening to an audio released by Sajani, it seems that Sabita is in a very distraught state. She cried and said to her sister, “I have become very weak. I cannot continue anymore. I don’t even have the courage to speak. I am very disappointed. I have tried to be very strong, but have become weak from within. I can’t stand this pain every day.”

After the incident, the relatives of the deceased have not been able to take it easy. They suspect that Sabita was either killed or mentally tortured and forced to commit suicide. Preliminary police investigation had ruled that it was a suicide. According to the police, Sabita committed suicide in her own room. The postmortem report of the deceased stated that the cause of death was ‘hanging’.

Deputy Superintendent of Police (DSP) Surya Bahadur Thapa of the District Police Office Chitwan said that the incident does not seem to be a murder. However, he asserted that the investigation shows she had been encouraged to commit suicide through torture.

DSP Thapa told Nepal Press, “The preliminary conclusion of the police is that this is an incident of suicide encouragement. We have already submitted the report with all the evidence. The final decision will be made by the court. We support the court on our behalf.”

According to Sabita’s relatives, she had been suffering from various forms of torture for a long time. Her husband has been accused of beating her after consuming alcohol. Even more sensitive is the fact that Sabita was sexually abused by her 75-year-old father-in-law.

The police had arrested Sabita’s husband Yogendra Kumar Dhital, father-in-law Ramesh Kumar Dhital and mother-in-law Bhawana Dhakal on the basis of a complaint lodged by Sabita’s relatives. They have all been released on bail.

According to District Court Judge Ishwar Aryal, the husband and mother-in-law were released on Rs 1 lakh bail and the mother-in-law on Rs 25,000 bail. The matter is being further investigated.

Sabita’s relatives have made serious allegations of sexual abuse against the deceased’s elderly father-in-law. Some video clips supporting the allegations have also been made public. A video posted on YouTube and Tiktok shows Dhital sleeping on his daughter-in-law’s lap and touching a sensitive organ. This video was taken by Sabita herself from her mobile phone for proof.

According to her sister Sajani, Sabita complained that her father-in-law had touched her wrongly. Sabita’s husband and mother-in-law have not accepted this. According to Mr. Yogendra, since his father is old and sick, it is natural for his daughter-in-law to take care of him.

However, many evils are also being seen in the name of seeking justice. In the case under consideration in the court, the process of forming opinions and abusing by watching YouTube interviews is rampant. There is a danger that such a trend will affect the functioning of the police and the courts.

While giving interviews to various YouTubers, Sabita’s relatives handed over audios, videos and other evidence to them. They did not pay attention to the fact that sensitive audio-video, which should only be given to the police, could be misused. YouTubers have proudly uploaded such video clips in the lure of viewers and made them viral by adding exaggerated and sensational titles.

Meanwhile, the campaign to bring justice to Sabita is going on in a different way on TikTok. Using video clips from YouTube, a young woman has made TikTok videos by lip-syncing and acting. Such an act in the name of giving justice has made the victim’s family even more victimized. Sabita’s sister Sajani has said that the evidence she has provided to YouTubers have been misused. “This is hurting us a lot. Please do not post such videos.”

Meanwhile, the Cyber ​​Bureau of Nepal Police is unaware of this whole case. Bureau Chief, Deputy Inspector General of Police (DIG) Ram Kripal Shah said he was not aware of the incident. He told Nepal Press, “Since you asked, I will look into it now and inform you of what is happening.” He said that legal action could be taken against the person who made such videos public.

When asked what would happen if it was the police or anyone concerned that made this content public, Chief DIG Shah responded that action would be taken against whosoever is found to have done it.