Fraud in the name of oxygen plant procurement, cost of 1.2 million worth oxygen generator almost 4 million 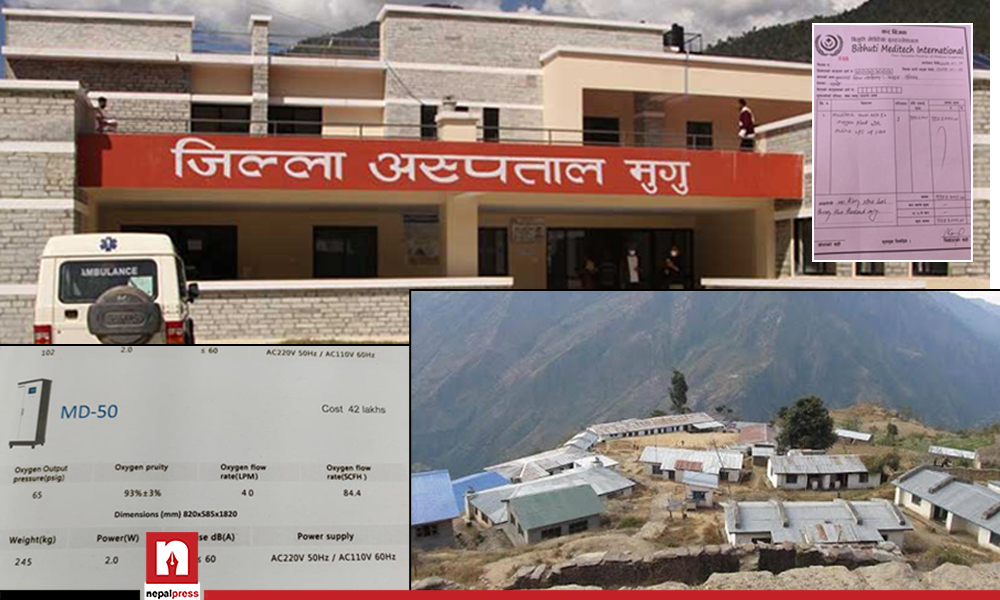 SURKHET: The Karnali provincial government has sent Rs 4 million for the establishment of oxygen plants in eight districts of the state.

“We were informed that the advertisement was for an oxygen plant with various specifications. It is unknown to us how it was brought.” One of the workers said that Dr Bhishma Pokharel who was the chief of the department was the one who paid the fare. He is now in Kathmandu.

Kalikot health chief Kattak Bahadur Mahat said the payment may have been made on the basis of the bio-engineer response. “I have just returned as the head of the office. Earlier, Dr Bhisma Pokharel was in the post, “We paid because everything was right,” he told  Nepal Press.

Stating that he came to the office later, he said that the procurement process was regular and in accordance with the law. Mahat said, “There is no weakness in this. We have opened this machine in the presence of Saurabh Sijapati, a biomedical engineer of the province. We paid after he said okay. It’s not our fault. “

Gyan Singh Budha, former acting head of the Mugu District Health Office, said that he had made the payment on the basis of a letter from bio-medical engineer Saurabh Sijapati as he did not have technical knowledge.

The oxygen generator purchased in Rukum Paschim has not been opened. Bibhoti Meditech International has submitted a bill of Rs 3.92 million to the health office. Even though the machine was sent to Jajarkot, no payment has been made.

On the other hand, in the tender held by Dailekh Health Office, Bibhoti and Dragon suppliers applied but no financial proposal was sought from Dragon suppliers. ‘It was recommended by Saurabh Sijapati. We had accepted it after he chose Bibhoti, but now we have broken the contract because we need a big oxygen plant, ”said Thirprasad Regmi, head of the office. As per the agreement, Bibhoti has already brought the materials.

On the other hand, in the tender held by Dailekh Health Office, Bibhuti and Dragon suppliers applied but no financial proposal was sought from Dragon suppliers. ‘It was recommended by Saurabh Sijapati. We had accepted it after he chose Bibhuti, but now we have broken the contract because we need a big oxygen plant, ”said Thirprasad Regmi, head of the office. As per the agreement, Bibhuti has already brought the materials. 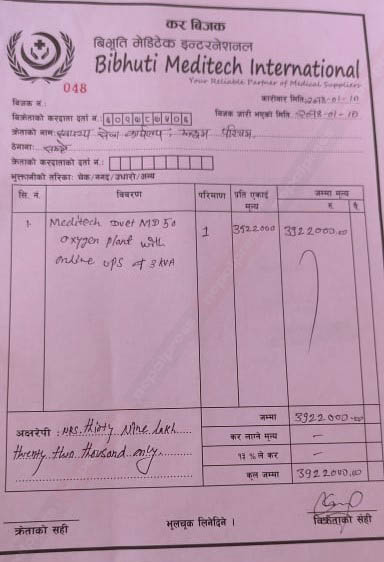 “All those machines are priced at a maximum of Rs 1.2 million. These machines act as oxygen concentrators. The price of all these should not be so much ‘, says one of the suppliers,’ because there might have been a setting within them, due to which it is brought at such a high price. This is the reason why single-phase machines are connected in places where there is a three-phase line. ‘

Meanwhile, an employee of the Health Services Division claims that there was collusion between the top political leadership and the district staff in this manoeuvre. According to him, the districts have purchased these supplies in the name of the plant without any discussion in the department.

Henceforth, the head of the Directorate of Health Services, Dr Rabin Khadka said that action should be taken against those who are at fault. Stating that he was ready for that, he expressed his commitment for the necessary investigation.