Humanitarian service against the pandemic obstructed 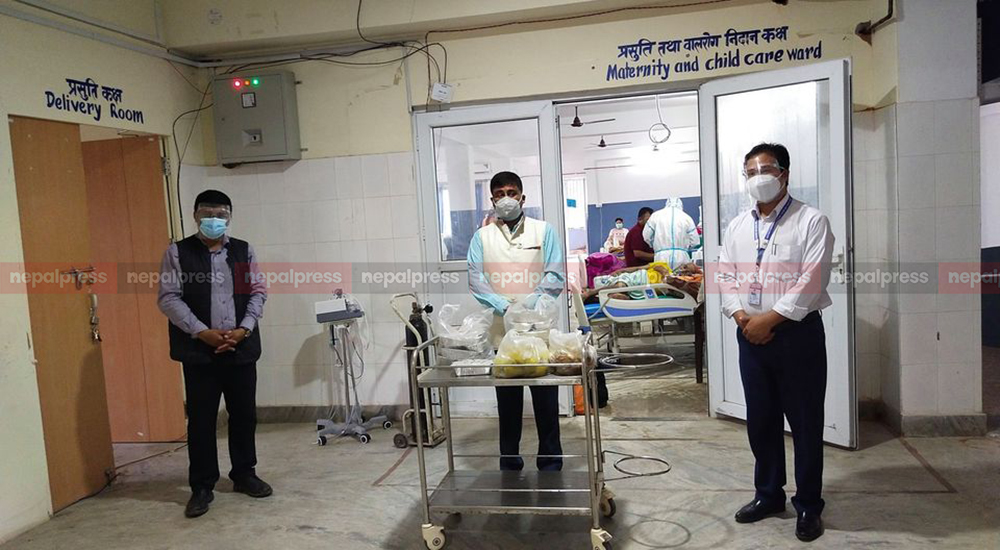 POKHARA: The Pokhara Metropolitan Committee of Bibeksheel Sajha Party arranged food for the COVID-infected patients, caretakers, and health workers being treated in the isolation center of the Western Regional Hospital from 16th May. The campaign, dubbed ‘Sankramitlai taato bhaat‘, planned to feed 200 people every evening.

After preparing the food at a restaurant on the lakeside, they also fed people at the isolation center for a few days. The District Administration Office issued a notice on the next day (17th May) requesting them not to distribute free food, which they had planned to do for 10 days. It was said that the campaign should be conducted only in coordination with the local level.

The second notice states that “While some organizations and youth have asked for permission to distribute food, it will not be granted as health and safety standards cannot be met.”

After the administration issued the notice for the second time in five days, Bibeksheel Sajha has stopped its campaign. Coordinator Ajay Shrestha has accused the administration of restricting selfless humanitarian service. He claimed that they had launched the campaign after it was seen that the infected people could die of starvation during the pandemic.

“Serious attention has been drawn to the administration’s obstruction on the ‘Taato bhaat abhiyan‘ launched by the Pokhara Metropolitan Committee of the Bibeksheel Sajha Party during the COVID pandemic. “Aware of the possibility of people dying of starvation as well as the disease during the pandemic, we launched the campaign,” said coordinator Ajay Shrestha, “It is deplorable that the administration has disrupted our party’s selfless distribution of free food to the hungry and infected.”

However, work is underway to distribute free food to the sick and infected at the State Covid Treatment Hospital, Infectious and Communicable Diseases Hospital, ignoring the order of the administration. Arrangements have been made for Namaste Chicken House to feed them for 4 days and Deepak Pahari to do so for 1 day, for a total of 5 days.

The free food campaign, which started on Friday, was coordinated by CPN-UML MP Rajiv Pahari. When asked by Nepal Press, “Wasn’t it disobedient to keep distributing food despite the notice being issued by the administration?”MP Pahari said, “We are not going to deliver food there ourselves. The hospital will provide it under our coordination.”

MP Pahari informed that a total of 62 meals were distributed free of cost daily in the morning, afternoon, and evening. He clarified that they did not distribute food only for cheap fame and carry out propaganda. “We don’t go there ourselves to take photos, this is not propaganda for cheap fame,” he said.

The District Administration Office, Kaski, however, said that the distribution of food has been stopped to make the assistance program enter through one channel only, and prevent the spread of the infection. “There are prohibitory orders in place now, the infection rate is high. At this time, it is not appropriate to distribute food when a notice has been issued to avoid crowding,” says CDO Thaneshwar Gautam. “The work is good, but the context of this disaster is different.”

Gautam said that if there are any problems in feeding the patients of the hospital, they can cooperate with the canteen of the hospital. He said that he was not aware of the free food distribution at the infectious disease hospital. The distribution at the western regional hospital has been stopped after information was received. We have not received any news on this being done at the infectious disease hospital. I will look into it,” he said.