President calls for PM candidature, to be submitted by 5 PM today 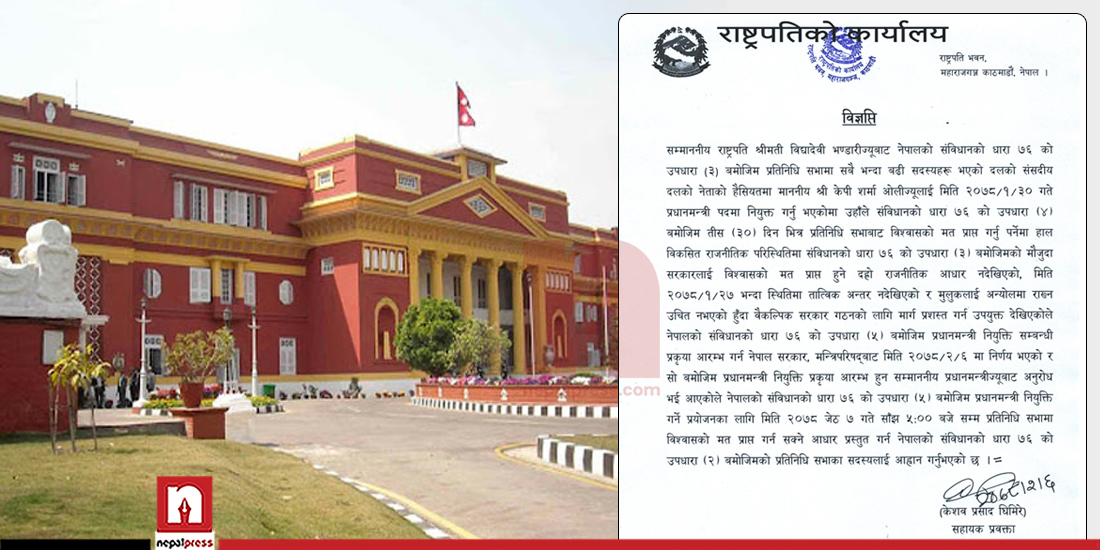 KATHMANDU: President Bidhya Devi Bhandari has started the process of forming a new government as per Article 76, Clause 5 of the Constitution.

After Prime Minister KP Sharma Oli paved the way for the formation of a new government without a vote of confidence from the parliament as per Article 4, the President proceeded with the process under Article 5.

The President’s Office said in a statement on Thursday night that it has given time till 5 PM today to present the grounds for obtaining a vote of confidence.

KP Sharma Oli became the Prime Minister as the leader of the largest party in the House of Representatives under Article 3 which has paved the way for a no-confidence vote, the alternate Prime Minister will now have to present the basis for gaining the confidence of the majority members by Friday evening.

However, the opposition coalition will have to present a majority of two or more parties by today evening. Earlier attempts to do so failed and Oli was appointed Prime Minister.

In case of failure to present the basis of majority within the time given by the President, the House of Representatives will be constitutionally dissolved and elections will be declared in the country under the leadership of KP Oli.

So far, the Mahanta Thakur faction of PSP has remained neutral and the government decided to grant citizenship to the children of natural-born citizens as per the demand of the Thakur faction on Thursday.