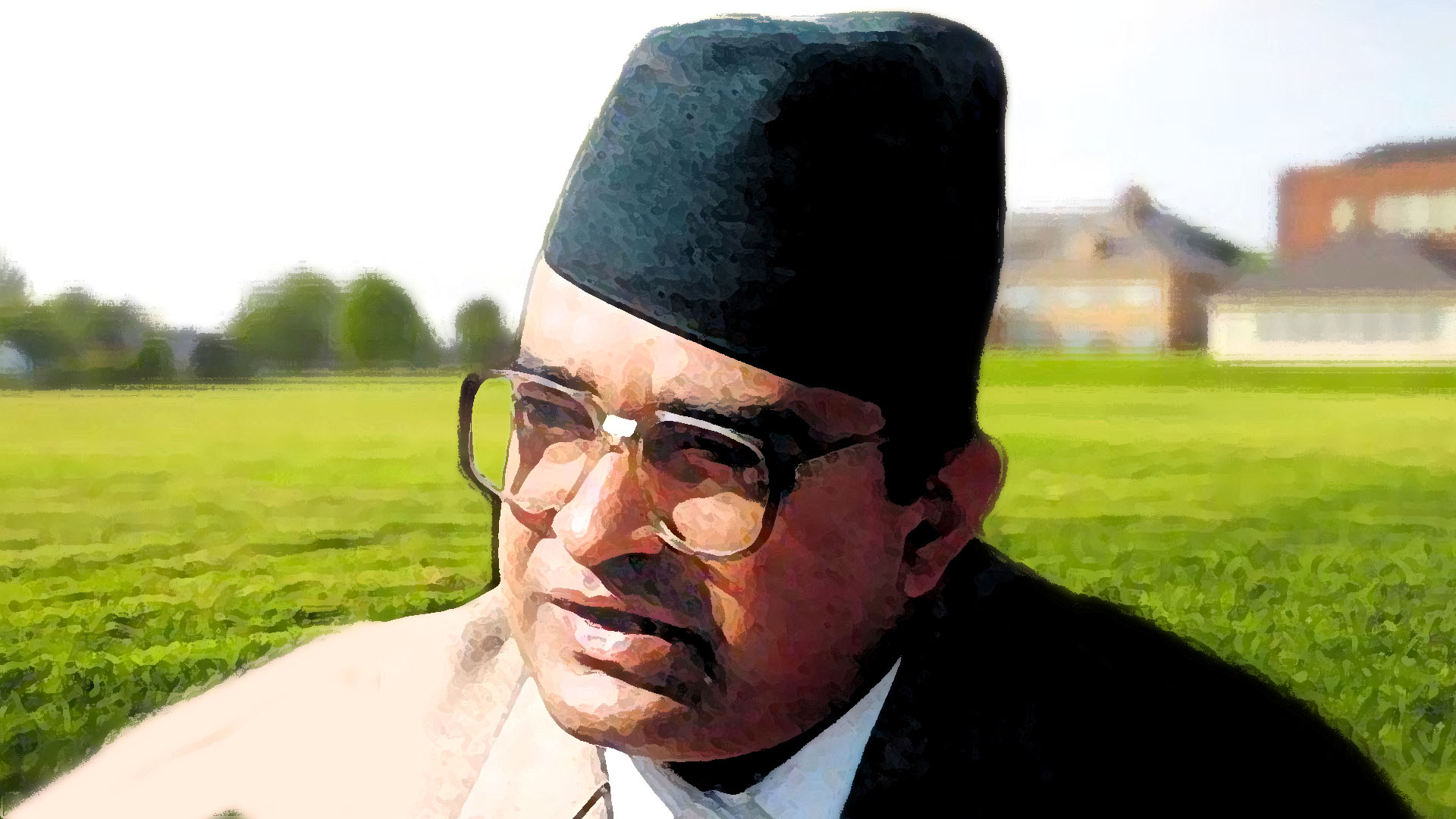 Based on the official Nepalese calendar of Bikram Sambat, today is the 28th Memorial day of Madan Bhandari. The then Secretary-General of Nepal Communist Party (United Marxist Leninist- CPN(UML) breathed his last in what is said was a car accident on 3 Jestha 2050 (16 May 1993) at Dasdhunga of Chitwan district. Madan Bhandari, along with his comrade Jibraj Ashrit, died in a still-mysterious accident.

Madan Bhandari was the leader of the main opposition CPN-UML in Nepal’s lower house of parliament and was elected from Kathmandu in Nepal’s second multiparty parliamentary elections of 1991 at the time of his death. Starting from his formal affiliation at Janabadi Sanskritik Morcha in 1972, a student movement established by Puspalal Shrestha, Madan Bhandari was in active politics, both underground during the party-less Panchayat era and in political freedom after 1990, for two decades. His parliamentary association was of just two years. Still, Madan Bhandari has a great mark in Nepal’s mainstream politics, especially in the leftist politics of Nepal.

Here are five reasons why Madan Bhandari is a great left-wing leader of all time in Nepal.

In the dictionary of orthodox communist ideology, the communist party and multiparty democracy do not go together. Madan Bhandari made a departure from this standpoint. He coined ‘People’s Multiparty Democracy’ (PMP). According to the official website of CPN (UML), PMD was approved by the fifth national congress of CPN(UML) which was held from 27 January to 2 February of 1993 (14-20 Magh 2049 BS).

According to Tika P. Dhakal, a writer and analyst who has extensively written on Madan Bhandari, PMD was aimed at democratizing the communist movement in Nepal. ”Development of PMD holds more significance as its rise in Nepal came at a time when the Soviet Union had just fallen and socialist states of Eastern Europe were losing public support one after the other. The world was starting at the huge rejection of communist ideology, and to stay relevant there was a need for new imagination and fresh thinking.” While justifying his PMD among his comrades and enthusiasts, Madan Bhandari had said, ‘Let’s use and develop Marxism with creativity’.

The leader behind mainstreaming Nepal’s left party in parliament

Both admirers and critics of Madhan Bhandari are on the same page when it comes to his charismatic appeal to the general people.  His charismatic figure is manifested on two fronts. First, on making a great showing at the parliamentary elections of 1991 where he led CPN-UML to be the second-largest political party in the parliament. Likewise, he himself defeated incumbent Prime Minister Krishna Prashad Bhattarai. This defeat was widely covered in the international media outlets also. Los Angeles Time’s journalist Mark Fineman wrote on 15 May 1991, ” Congress Party leader Krishna Prasad Bhattarai, a respected elder who has served as Nepal’s interim prime minister for the past year, resigned his post-Tuesday after losing his Katmandu seat to the general secretary of Nepal’s United Marxist-Leninist Party. ‘It is a vote for democracy. It is a vote for independence. It is a vote for the alleviation of poverty, said Madan Bhandari, the 39-year-old Communist leader who defeated Bhattarai by just 750 of the 53,000 votes cast in the largely poor, urban district.’  The report was headlined ‘Communists Celebrate Nepal Victories : Elections: Katmandu goes Marxist but moderates lead in countryside voting.’

Tragically, in the first parliamentary elections of 1959, the then two veteran communist leaders, Puspalal Shrestha and Dr. Kesharjung Rayamajhi had lost elections to Nepali Congress candidates. Shrestha lost his election bid to Ganeshman Singh in Kathmandu and Rayamajhi was defeated by Achyutraj Regni of Palpa district.  As a firebrand orator, Madan Bhandari would draw hundreds of spellbound listeners at his mass address. In addition, his speech audios would be sold in the market.

Madan Bhandari was always against violent communist struggle. He always advocated for peaceful movement. In his interview for the Newsweek Magazine of USA on 27 May 1991 with journalist Michelle Litvin, Bhandari has said,  ”In case of our party, we have decided to establish democracy, and will take power only after we get the mandate from the people.’  Bhandari was a vocal advocate of republicanism and secularism in his political documents, media interviews, and mass speeches, which finally materialized after his demise. Unlike his radical communists, Bhandari was not a leader who encouraged forceful capture of landowners’ lands. Speaking to Newsweek he had said, ”We will not take the land without paying money.” Just because of his democratic-minded leftist ideology and practices, many orthodox communists criticized him for being deviated from core communist ideology.

Madan Bhandari was a nationalist by heart. Even in talks of receiving foreign aids, he would not compromise on national interests. This is reflected in his interview with Newsweek also. Newsweek asked, ”Are you worried that Nepal’s foreign aid could be cut off if Communists gain a majority?”. Bhandari replied, ”There is no reason for foreign aid to stop if communists come to power. But we will not ask for aid at the cost of our country’s freedom, independence, dignity, and sovereignty. These things are more important than foreign aid. Speaking to Newsweek, Bhandari had also talked about unequal treaties with India and his desire to make balanced relationships with both China and India. He said, ”With India, in the past, there were some unequal and humiliating treaties. We will review the treaty and try to renew it. We want to remove the provisions which are insulting and unequal to us. One thing we want is to have very good relations with China and India. Neither do we want to be pro-China or pro-India.”