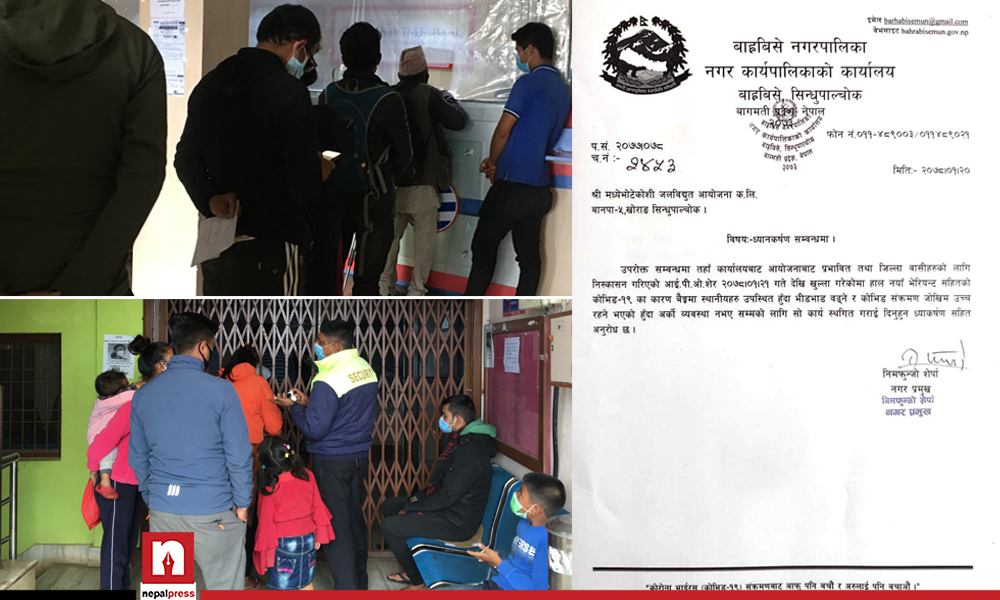 The Ministry of Health has been publishing the statistics of around 7,000 infected and more than 35 deaths daily in Nepal. To control the spread of the infection, local administrations have so far issued restraining orders in more than 48 districts. Preparations are underway to implement the prohibitory orders in some other districts.

Madhya Bhotekoshi Hydropower Project has issued 6 million ordinary shares for the locals and project-affected people. The project has issued IPOs for the people of Sindhupalchowk as per the provisions of the Securities Act 2063, which stipulates that 10% of the total issued capital should be issued to the locals. 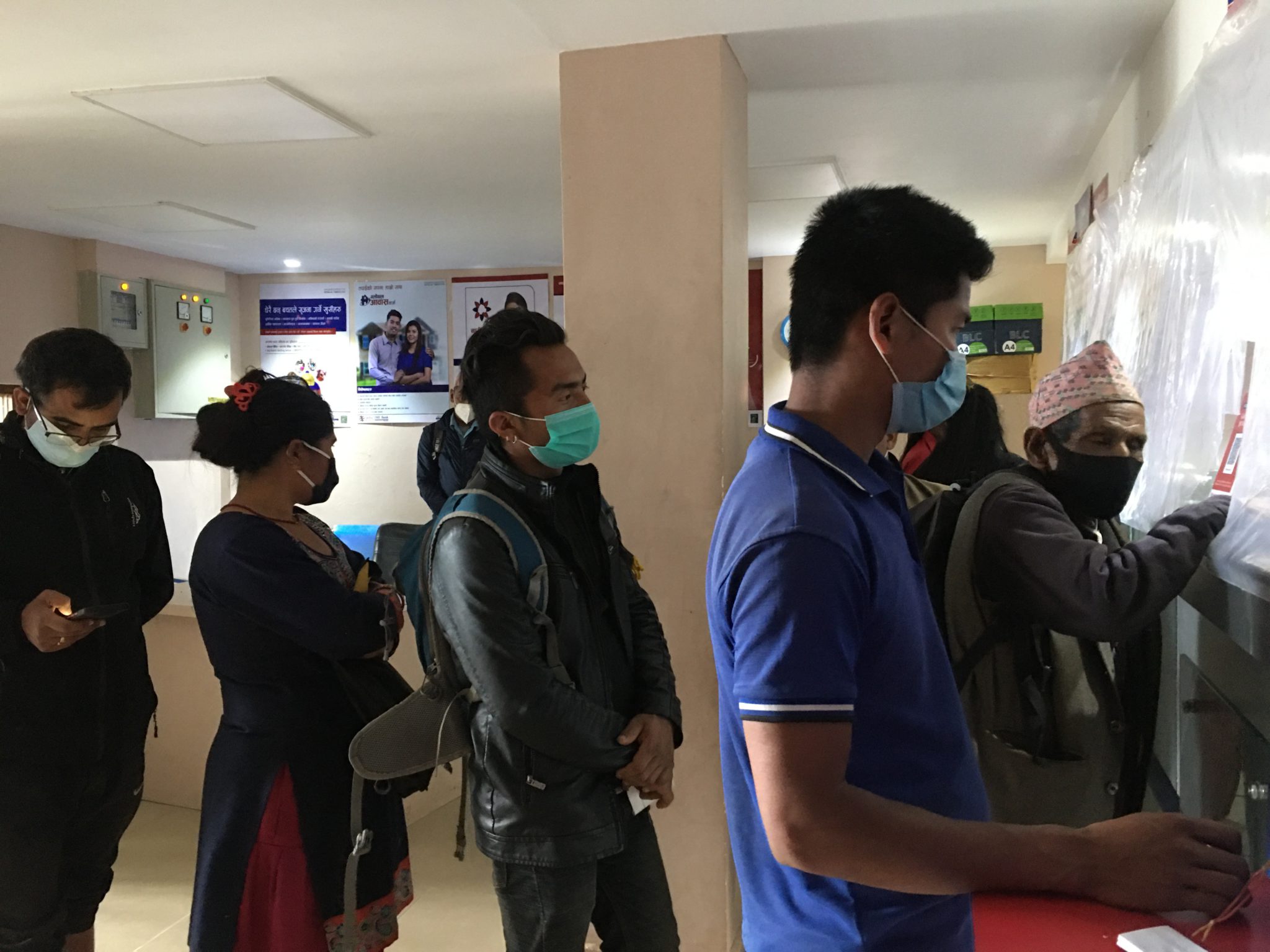 The project, which received permission from the Securities and Exchange Board of Nepal (SEB) for the issuance of IPO on 17th April, had set the date of issuance of shares on 4th May. However, stating that the new variant of COVID-19 was spreading rapidly, the government issued a prohibitory order in various places including the Kathmandu Valley on 29th April.

The date set for the issuance of ordinary shares for the project-affected and locals has fallen within the prohibition order. The government has not included share issue and transaction in the list of essential goods and services. However, the project has still issued the shares.

As per the decision taken by the Council of Ministers on the recommendation of CCMC, the issue of shares of Madhya Bhotekoshi Hydropower Project should be postponed automatically as the share trading has not been included in the list of essential goods and services.

The project should have set another date for issuing shares only after the prohibitory orders are lifted, but the health of the people has been jeopardized. The project is making people fill IPO forms by queuing up the general public, risking COVID-19 infection.

“District residents are queuing up and taking share forms. As the form is insufficient, we have requested more from Kathmandu. Do not worry about COVID. Everyone has taken precautionary measures,” he claimed.

The project has until 19th June to issue IPOs. The Securities Act has made a legal provision to release shares within two months of the Board’s permission.

The government has appealed to the people to take precautions saying that the number of infected people in hospitals across the country is increasing rapidly due to the pandemic and there is becoming a shortage of hospitals and health facilities. The Securities and Exchange Board of Nepal (SEB) has remained silent even at the forefront of this risk when the public has been made to fill up the share forms by queuing up for the Madhya Bhotekoshi Hydropower Project.

When we contacted them about this, a contradiction was found between the statements of the Chairman and the Spokesperson of the board. Board Chairman Bhishma Raj Dhungana said that arrangements have been made to fill the shares online and thus added that the issuance of IPO will not have much impact on public health. He said that there was no reason to hurry as the deadline was 3rd June. “There is no need to panic as there is an arrangement to fill in the IPO online. There is also an arrangement to fill up the IPO till 3rd June,” he said.

However, there is a stark difference between what Dhungana, Chairman of the board said, and the reality. CDAC and Clearing Limited Spokesperson Suresh Neupane says that he does not have a system to issue shares to the locals through ‘Mero Share’.

“We do not have a system to provide information to the locals that they need proof of residency when issuing shares,” he said. “Again, there is a legal provision that the locals have to go to the respective places when shares are distributed.”

Similarly, the CEO of the project has informed that the project is selling share applications to the locals by queuing them up and not via online platforms.

Even the Chairman and Spokesperson of the Securities and Exchange Board, Neeraj Giri, have different opinions on this issue.

Securities Board Spokesperson Neeraj Giri said the company was in a hurry to issue shares. “Staying safe from COVID infections is a top priority right now. It would have been better if the regulators had issued the shares cautiously rather than intervening everywhere,” he said.

Stating that the project and sales manager were negligent, Spokesperson Giri said, “As the current situation is very sensitive, it was possible to extend the deadline for the issuance of shares even after the 19th of June.”

Global IME Capital has been given the primary responsibility of selling the shares of Madhya Bhotekoshi Hydropower Project. It has assigned the responsibility of sales to six other assistant sales managers including NIBL, Prabhu Capital, Laxmi Capital, Civil Capital, Sanima Capital and CBIL Capital. Simultaneously, sales centers have been identified at 37 places in Sindhupalchowk.

According to Paras Mani Dhakal, Chief Executive Officer of Global IME Capital, an online system has been set up on its website. He says that the work was taken forward as the agreement for the project took place four years ago and thus they wanted to complete it on time.

However, he said that the work would not be taken forward if the Securities and Exchange Board ordered it to stop. “The Securities and Exchange Board and the project have not said anything. We will stop the work if necessary instructions are given,” he said. “Since you all are also interested, I will also discuss this within the company”, he said.

Megh Bahadur Thapa, Chairman of Merchant Bankers Association and Chief Executive Officer of NIBL ​​Capital, says that it is appropriate not to issue shares in the current situation. “We have talked to Global IME Capital, but we have received information that the project has not complied. As the risk of COVID is high, it is advisable to push it back for some time,” he said.

How did eSewa become connected with IPO?

Residents of Sindhupalchowk are also applying for the IPO of Madhya Bhotekoshi via eSewa. eSewa is only a payment service provider. Bhuvan Kandel, Executive Director of the Payment Systems Department of Nepal Rastra Bank, says that eSewa cannot accept IPO applications.

“eSewa is only allowed to work on payments, so it cannot work on shares,” Kandel said. “Even though secondary market transaction payments, renewing ‘Mero Share’ and dividend payment can be done via eSewa, it cannot take IPO application payments by filling up the forms.”

eSewa, on the other hand, says that it has only provided free service to its locals and project-affected customers in Sindhupalchowk. Rohan Lamichhane, Chief Operating Officer of eSewa, said that they only provided services at the request of Global IME Capital.

“We have not received any fees or benefits for doing this. “Global IME Capital requested us and thus we only provided support and facilities to our customers,” he said. eSewa has stated that only the customers of eSewa who have a BO ID and beneficiary account can fill applications for the shares of Madhya Bhotekoshi project. It has also given Global IME Capital access to this and demanded necessary documents to verify whether applicants are local residents of Sindhupalchowk or not.

The general public will be able to deposit money for the shares they have applied for through eSewa or any other bank. IME Capital, the service and sales manager, said that arrangements have been made to reject and return suspicious and unverified applications through the same medium.

Concerns over non-Sindhupalchowk residents getting shares

The 102-Megawatt project is a company with a capital of about Rs 6 billion. Despite issuing 6 million shares to the public, the company has stated that it will issue 8.1 million IPOs to the public in the near future. Currently, the share capital of the Upper Tamakoshi Hydropower Project is very active. Traders say that the share price will be high as it is a large project, which is why they suspect this activity from the Madhya Bhotekoshi project.

The Securities Trading Act has made a provision for the project affected and locals to sell their shares at the concerned place itself. The arrangement has been made for the purpose of giving shares to the actual locals and project-affected people. However, at this COVID-struck time, buying and selling shares online in such a hasty manner has increased the risk of shares reaching other people (non-residents) without knowledge of the Sindhupalchowk general public.

Due to COVID-19, on the one hand, the project-affected and the locals do not seem to be in a position to be able to fill share applications, while on the other hand, everyone does not seem to have online access. Hence, this has increased the risk of infection.

Ignorance of administration and municipality requests

Chief District Officer of Sindhupalchowk Arun Kumar Pokhrel and Chief of Police Rajan Adhikari also urged the Project Chief not to create crowds during the pandemic.

Similarly, Mayor of Barhabise Municipality Nimfunjo Sherpa had written a letter saying that the risk of COVID-19 has increased in his municipal area, requesting to stop filing IPOs at such a time. However, the project ignored the request of the administration and the municipality.

Sushila Pakhrin, Deputy Mayor of Barhabise Municipality, said, “Despite our request, the Madhya Bhotekoshi project has not complied. It is not right to lock people inside at other times but ask them to go and fill applications at the bank when it comes to shares.”

The Bhotekoshi Municipality has issued a prohibitory order in its area. Bank employees are the most at risk.