I received a new life and so did Dharahara, may I now get employment here: Ramila Shrestha 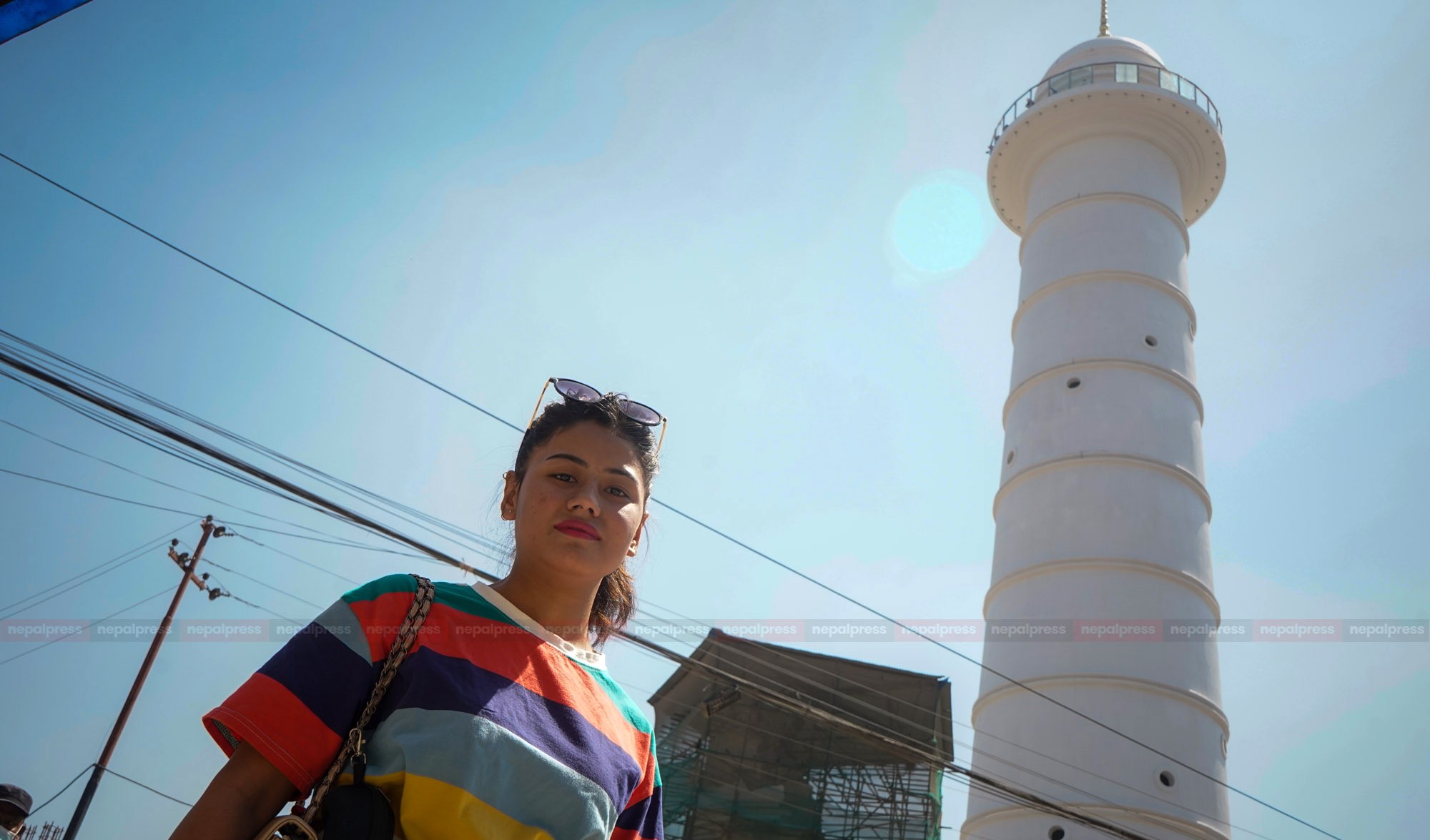 Burying her face in her hands, Ramila expressed her fear, eyes fixated on the newly built Dharahara.

Sundhara area was bustling with people, as compared to other days. Those who came on motorcycles would stop, fetch their mobile phones from their pockets and take a picture/selfie with Dharahara in the background. Even pedestrians would move forward only after taking a few snaps.

Pictures of the Dharahara have gone viral on social media in recent days. The government is thanking the people for successfully rebuilding historic structures destroyed by the earthquake, while others are calculating that so many hospitals could have been built instead with the expenditure of Dharahara reconstruction.

Meanwhile, scenes from six years ago are now swirling in Ramila’s mind. She had also come here on 25th April 2015 and climbed the Dharahara. She reached the top and shouted with joy. After that, however, neither does she remember what happened – nor does she want to. 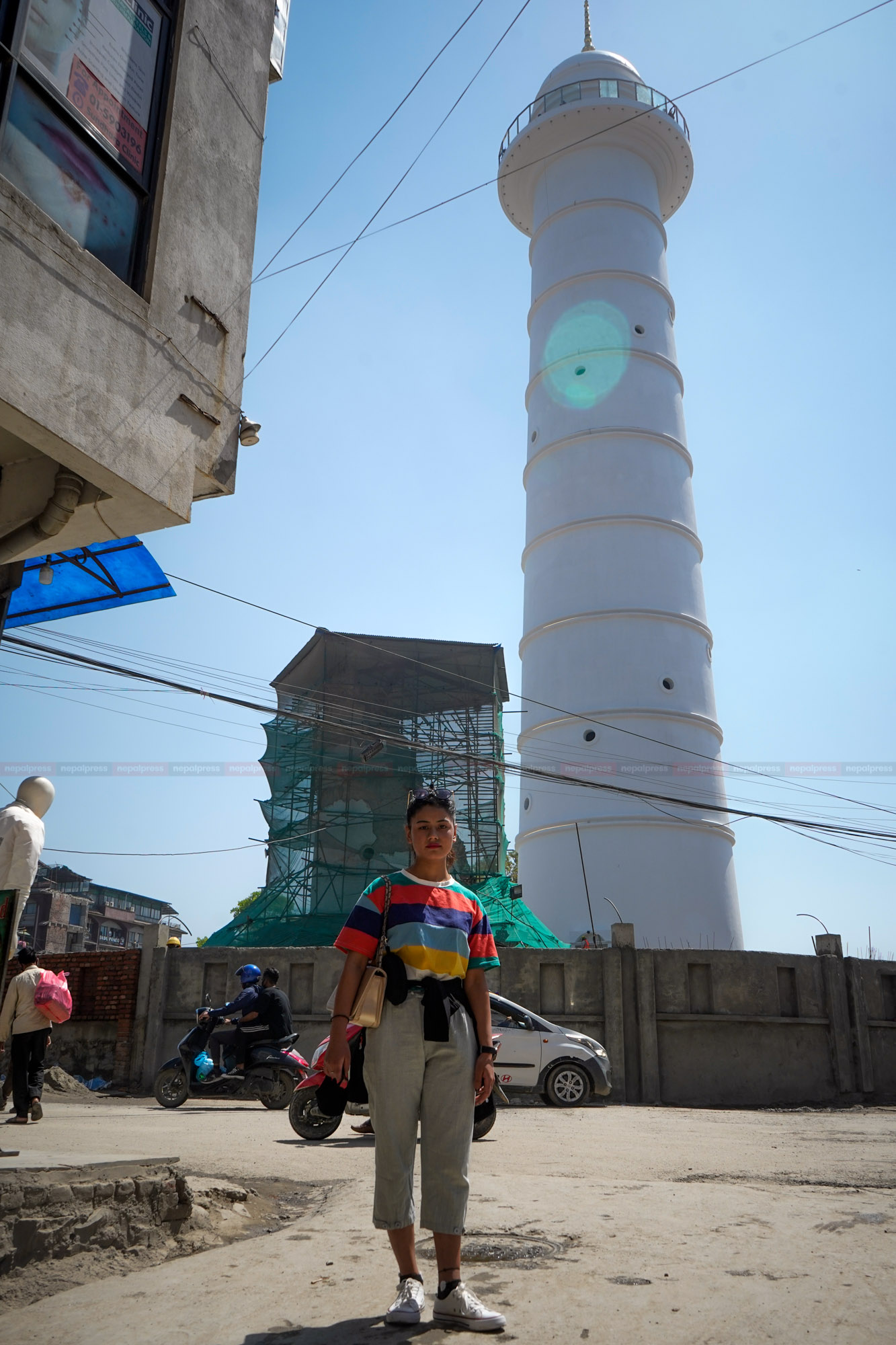 Yes, Ramila was at the top of Dharahara when the earthquake shook the country. As soon as it collapsed, she fell to the ground.

The ruins of Dharahara that collapsed in the earthquake are still in the same damaged condition. Another structure has been built as Dharahara, and the stump has been covered as a symbol of the earthquake.

Ramila arrived here the day before the inauguration of the newly constructed Dharahara.

How did she feel when she saw the new Dharahara?

“I feel happy,” she said, pushing her goggles over her head, “But I also feel very scared.”

“You received a new life after falling from Dharahara!”

She smiled a little and nodded in agreement. Pointing towards the Dharahara, she said, “Not only me, this too got a new life.” 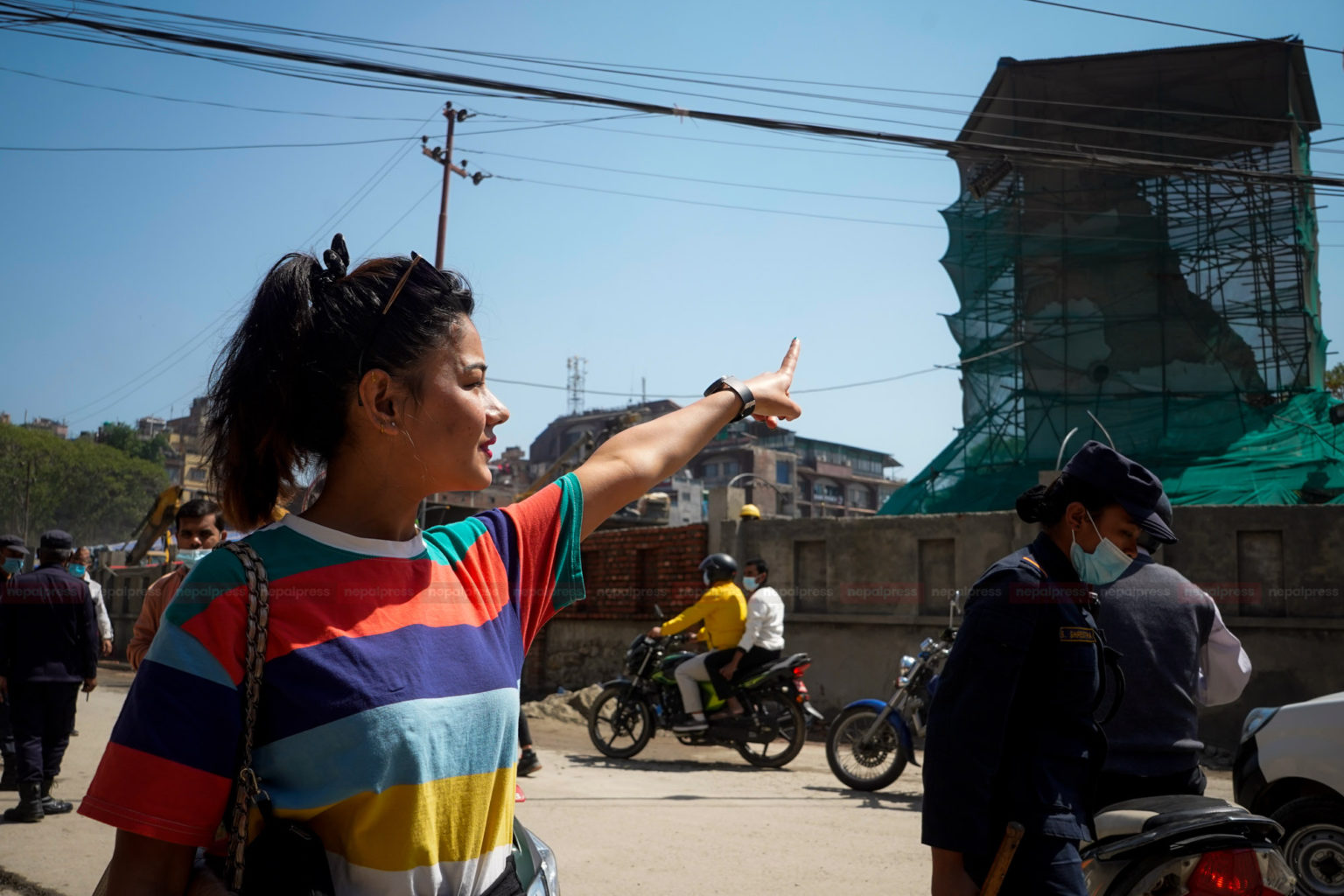 Ramila, who was severely injured after falling from the tower, has recovered only recently.

“I stood up, and so did the Dharahara,” she said, gleaming with pride.

“When will you climb the new Dharahara?”

It seemed that this question made Ramila anxious.

“No! I am scared to climb it now!” she said, looking nervous.

Ramila had gone out with her friend Sanjeev Shrestha that day. As they passed by, Sanjeev asked, “Wanna climb Dharahara?” Ramila agreed.

Both of them walked towards Dharahara with great enthusiasm. They bought tickets and climbed up. Reaching the top, they rejoiced, looking at Kathmandu.

After a while, however, Dharahara suddenly started shaking. Leaving them helpless in seconds, the tower collapsed.

They jumped out of the 9th floor tower and fell to the ground. Ramila became unconscious.

“I was at the hospital when I woke up. I asked for someone else’s phone and called home. My consciousness was on and off,” says Ramila.

Her leg was fractured, and so was her friend’s hand. It took Ramila a long time to recover. Her head and part of her face were also injured.

Ramila stayed admitted to the hospital for a month. Even when she was in the hospital, tremors kept coming. She would get extremely scared, despite feeling happy to be alive. With the aftershocks that came again and again, however, she felt as if she might not survive.

Her first leg surgery failed. As a result, she suffered more. Later, steel was placed in her legs. For about a year and a half, she walked on crutches.

“It’s been a year since the steel was extracted. However, my leg has not fully recovered. It hurts from time to time,” she says.

The financial situation of her home was not strong. Initially, the government provided medical support, but all remaining costs were borne by the family. Her father paid for her treatment through loans.

She later met someone who had also fallen from Dharahara. His leg had been irreversibly and permanently injured. This meeting made her extremely upset.

“After seeing him, I considered myself lucky,” she said.

Ramila was studying in the 9th grade when the earthquake hit. She missed school for a year due to her injury. She recently completed her +2. She is preparing to begin a bachelor’s degree. 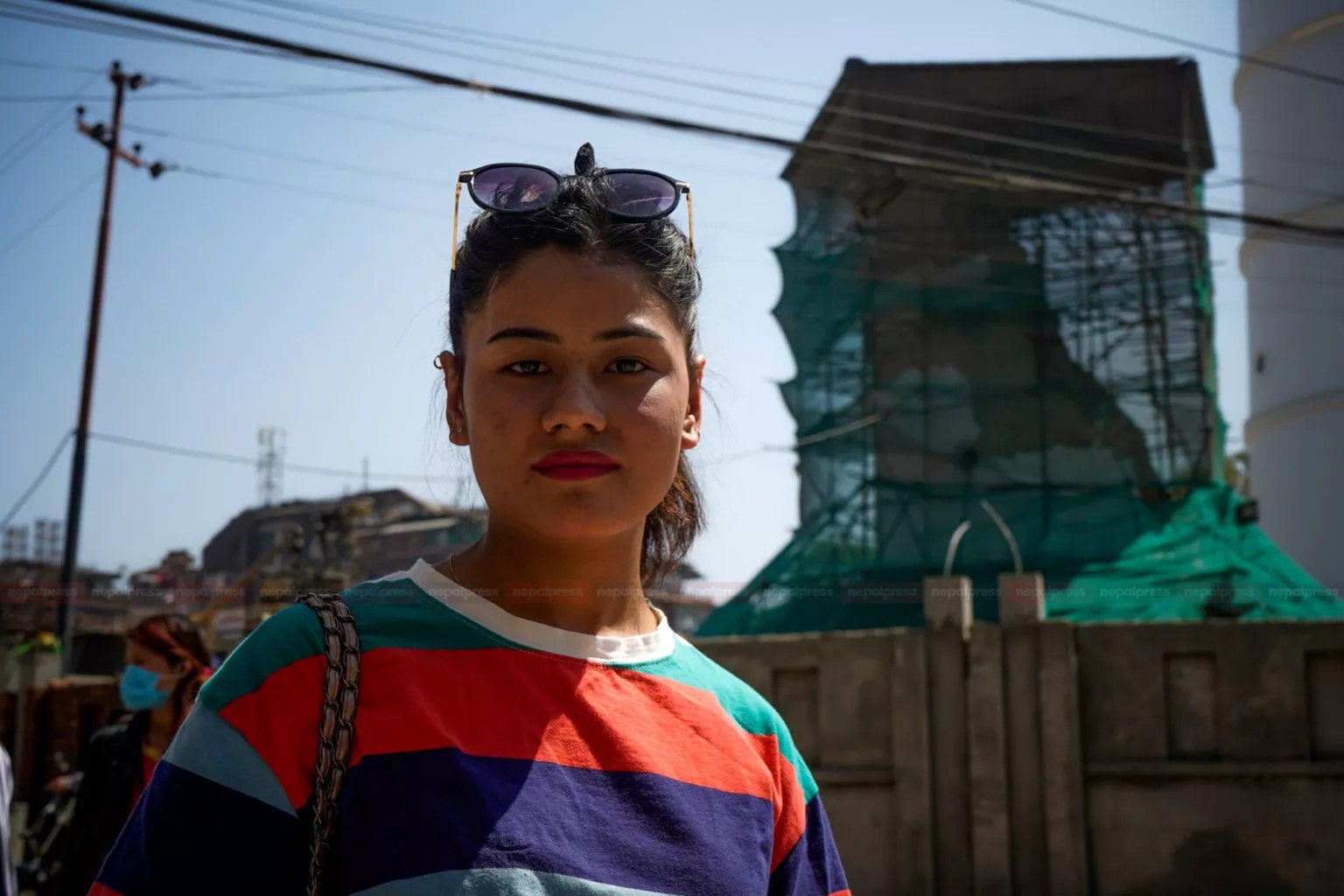 Every year on 25th April, Ramila is seeked by the media. At other times, however, nobody seems to care. Ramila complains about this.

“I don’t even like to give interviews anymore. No matter how many I have given, no one has done anything for me. Neither treatment, nor employment. The media earns views by showing our grief, but they do not help us”, said Ramila.

At this time, she is in need of employment. She understands that merely her father’s simple farming occupation is making it difficult to support the family. Her brother is young, so she needs to support herself and her family, while also continuing her studies.

“My parents are weak and at home. They cannot work much. I wish I could do something for them,” said Ramila, sadly.

“There is so much work going on in Dharahara. It would be great if the government offered me a job here,” she said, “Can you also please ask them to do something?”

Ramila’s desire to work in the same structure from which she fell and yet survived is meaningful.

“I may be scared for a day or two, but it cannot always remain that way,” she said, “I have fallen from here and I still survived, I should get a job here.”

She has received a call from the Reconstruction Authority saying that he should come to the inauguration of the Dharahara tomorrow. She was told she will be given an invitation card, but she has not received it yet.

“I don’t know if I should go or not,” said a confused-looking Ramila.