Instruction on closure of educational institutions

Government directive not abided to by municipalities of Kathmandu, more than half schools remain open 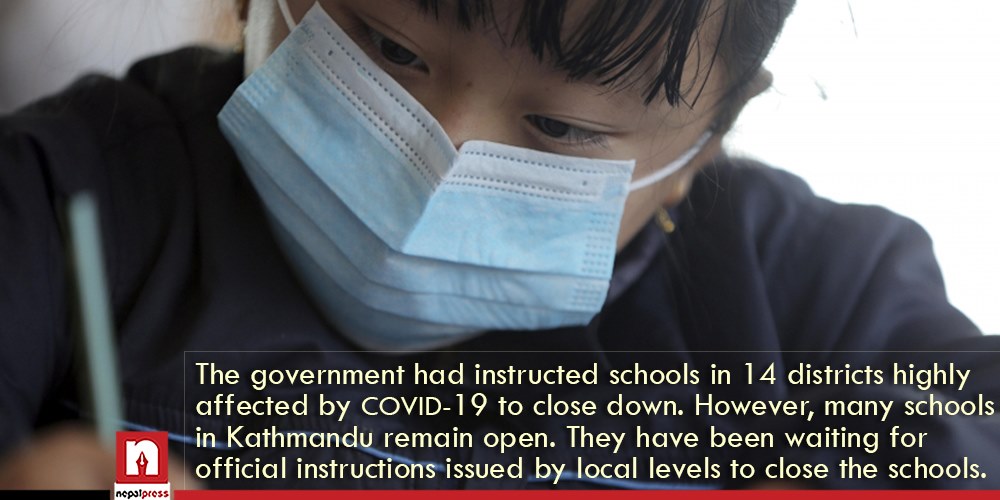 KATHMANDU: The government, under pressure from all areas after the outbreak of the second wave of COVID infections, decided at a cabinet meeting on Monday to close schools in the affected districts. Schools in Kathmandu have defied the government’s decision to close schools from Tuesday to mid-May and take teaching-learning to virtual mediums.

The Ministry of Health and Population had called for the closure of schools in 14 affected districts. However, many schools in Kathmandu have not been closed. The school principals have stated that the schools will not be closed until the local level issues a formal notice.

After schools in Kathmandu remained opened even on Wednesday, the Kathmandu Metropolitan City has directed to close schools in the area. The metropolitan office has issued a statement directing the government to close the school and conduct classes through alternative means as per the decision taken by the government on Monday.

Kathmandu district has 11 local levels including 1 metropolis and 10 municipalities. There are 691 schools in Kathmandu Metropolitan City. Ishwar Man Dangol, Spokesperson of the Kathmandu Metropolitan City, who is also the Ward Chairperson of Ward no. 15, told Nepal Press that a circular has been issued to implement the government’s decision in all schools. “We have already asked schools to close down. There will be monitoring,” he said.

Only 3 out of 10 municipalities in Kathmandu closed their schools following the government’s decision. 85 community and private schools in Kageshwori Manohara Municipality, 87 in Tokha Municipality and 102 in Tarkeshwor Municipality have been closed.

Schools are being run in 5 out of 10 municipalities. Municipality offices have not instructed schools to close. He said that open schools are operating as the municipality has not given any notice to close them down.

Heads of the municipalities say that some schools are not closed due to ongoing examinations. Chief of Gokarneshwor Municipality Santosh Chalise said that no instruction has been given to close the schools in the municipality as the condition of coronavirus infections is not critical.

He said, “Now we will discuss with the education committee, parents and stakeholders and decide whether to give instructions to close the school or not.”

“We have not yet decided to close the school,” said Sushila Adhikari, Deputy Chief of Nagarjuna Municipality. “We don’t have to close schools just because the federal government says so.”

Mina Lama, who teaches at a school in Gokarneshwor Municipality, said that they are waiting for the instruction of the municipality.

“Some students are showing symptoms. We are having to wait for the order of our municipality to stop physical classes in schools. This puts students at greater risk.”