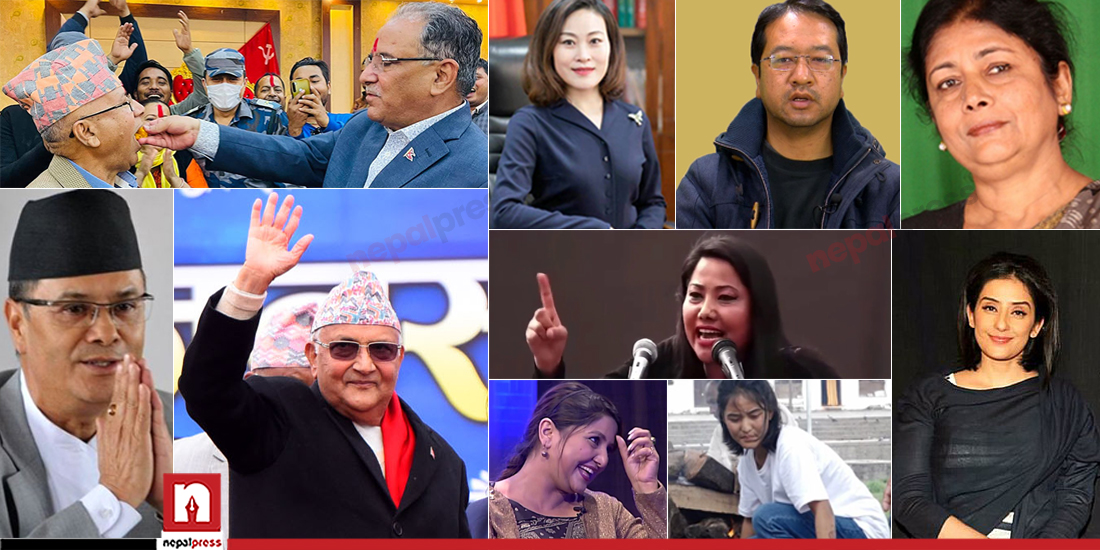 KATHMANDU: Nepal has entered the new year 2078 BS by bidding farewell to the year 077 BS. Last year was not very good for Nepal and Nepalis. On the one hand, COVID attacked all the limbs of the country, on the other hand, the political crisis in the country reached its climax.

There has been no shortage of news to the media this year. COVID and the lockdown that took place to stop it have long been the headlines of the media. Then began the political upheaval. Nepali politics is in turmoil following the dissolution of the parliament by the Prime Minister, the decision of the court to reverse it and another decision of the court to break the unity of the ruling party, the then  CPN.

Speaking of characters, as in the past, this year too, the political figures were in the news. Prime Minister KP Sharma Oli’s discussion has been going on throughout the year. Leaders of other parties also remained in the headlines. Apart from this, a few incidents also came to the fore, which made some of the characters behind the scenes newsmakers for a short time.

Here are 10 figures selected from different parts of the country, who became ‘news makers’ last year for positive or negative reasons. This time 6 out of 10 women are in our selection.

Actress Deepashree Niraula came under intense controversy this year. She was widely trolled for her remarks in an interview about the Actor Rajesh Hamal.

In the interview, Deepashree had questioned Rajesh Hamal’s title Mahanayak which translates as the biggest star ‘, which was not tolerated by Hamal’s fans she got trolled for it. When she apologized, the dispute was not resolved. In the end, Hamal had asked his fans to ‘forgive’ Deepashree. After that, the controversy over ‘Mahanayak’ gradually subsided.

While Deepashree was being bullied on social media, some artists came out in support of her. However, Hamal’s fans did not even spare the supporters.

Myagdi’s disciple Sapna Roka Magar became the headline of the media this year. She was featured on the BBC’s list of the world’s 100 most influential women.

The dream of earning acclaim by being included in the BBC list came to the fore in a different way at the end of the year. The one who was guiding her in the management of the corpse of Aryaghat, whom she called her father, blackmailed her. Sapna had to take refuge in the police after Binay Jung Basnet kept threatening her saying that she would make the offensive pictures of Sapna public.

Police arrested Binay Jung after Sapna filed a complaint alleging that he had even threatened to kill her. He has now been released on Rs 50,000 bail.

With the rise in the COVID case, the country’s health sector was under immense pressure. In COVID early days, hospitals and doctors were in threats. COVID brought health professional, Dr  Sher Bahadur Pun, into the limelight.

The Ministry of Health had written a letter to Pun explaining that he had been called for other purposes. The media had claimed that Pun was being forcibly removed from Teku Hospital.

Actress Manisha Koirala is also one of the popular figures of this year. However, she was brought to the fore not for artistic reasons but by political/diplomatic issues. Manisha tweeted in support of the new map made public by Nepal, including the territories occupied by India. The Indian media lashed out at Manisha over the tweet.

Manisha had worked in Bollywood for a long time. She is a one-time famous Bollywood actress. She is still working part-time. However, this does not mean that she has sold her nationality. Nepalis had strongly objected to the Indian media’s intention to show more loyalty to India than to Nepal on the basis of working in India.

Addressing a rally against the dissolution of the House of Representatives, her remarks against President Bidhya Devi Bhandari sparked controversy among people. The ‘Poster Girl’ of the Second People’s Movement had to face a lot of criticism on social media.

Eventually, the police made it a case of arrest and arrested Jhankri from his house. However, she remained in custody all day and was released in the evening. Her dramatic performance inTundikhel assembly was also discussed. In various speeches and interviews, she continued to attack Prime Minister KP Oli.

However, she was not included in the list of UML leaders to take action. The UML meeting had decided to seek clarification from four key leaders, including Madhav Nepal. However, Oli did not even consider Jhankri worthy of action. After the split of UML from CPN  Jhankri has not been heard speaking against Oli.

Sarita is one of the most controversial individuals of the year 2077. Giri, leader of the Janata Samajwadi Party, had spoken out against the new map of Nepal.

When Nepal published a new map including its territory occupied by India, Giri single-handedly opposed it. She even told the parliament that the map should not be published without asking India. She also disagreed with the proposed amendment to the constitution to change the logo with a new map.

Giri, known as a disciple of India, is already sceptical of nationality issues. She has repeatedly made anti-nationalist expressions and activities. Her party suspended her from parliament and party.

Her activism peaked, especially when the ruling Communist Party of Nepal (CPN-M) was embroiled in controversy and split. Yanqi met with top leaders on both sides and worked hard to prevent a split.

There were two opinions in Nepal about Yanqi’s role. One side welcomed the efforts of the Communist country representative to prevent the split of the ruling Communist Party. . On the other hand, like India, China has also started practising micro-management in Nepal. In any case, Yanqi is probably the most talked-about ambassador to Nepal so far. She is also very active on social media. She is trying to win the hearts of Nepalis through social media.

Calling Prime Minister Oli’s move to dissolve the parliament a ‘regression’, the cooperation between Pushpa Kamal Dahal ‘Prachanda’ and Madhav Nepal also became very popular this year. During the demonstration, a picture of Prachanda, Nepal, Jhala Nath Khanal and other top leaders with placards saying ‘We are here’ was very popular.

Prime Minister Oli himself made several comments on the picture. Prachanda-Madhav’s street rallies and speeches against Oli’s move in the CPN  continued to spread in the country. After the Supreme Court rejected the dissolution of the House of Representatives, the issue of Prachanda and Nepal feeding each other sweets got a lot of attention. 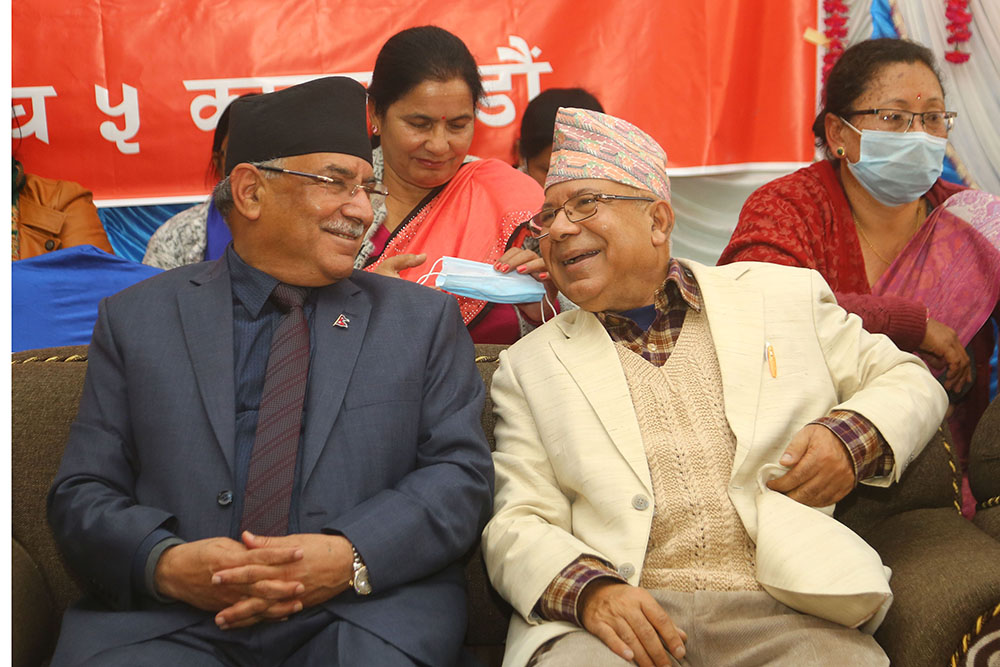 When Prachanda and Nepal’s ‘love’ reached its climax, another decision of the Supreme Court has set them apart. They are now close to each other even though they belong to different parties. It is estimated that there will be unity between Prachanda and Nepal again in the future.

This time too, Chief Justice Cholendra Shamsher Rana did not allow the image of taking risky decisions to be shattered. As the Prime Minister’s move to dissolve the House of Representatives escalated into a nationwide confrontation, Rana took a break from his leadership’s constitutional session on

He dismissed as “unconstitutional” the move by Oli, the most powerful prime minister in recent tim23rd February.

He had already given a hint of decisiveness since the issue of dissolving the parliament was to be discussed in the plenary session or in the constitutional session.

The two months from 20th December to 23rd February were probably the most stressful time for Rana. Because, on the one hand, Oli was pressuring the court, while on the other hand, the opposition was protesting in the streets.

During the hearing in the Constitutional Court, some speculated that the dissolution would be pronounced on the basis of questions asked by Rana to the lawyers, and some argued that the decision would not be in opposition because of the setting with the government.

However, Rana ruled in favour of dismissing all such allegations. After a month-long debate, Rana’s decision was unanimous and was discussed as a milestone in the history of the Nepali judiciary.

In the year 2077, Prime Minister KP Sharma Oli was in almost all headlines. He is widely known in the media for his humorous speech and his aggression against the opposition. The dissolution of the House of Representatives caused a stir in the media this year.

li was discussed in both negative and positive terms. He had dissolved the House of Representatives while the Communist Party of Nepal was still in power. The Prachanda-Madhav faction of the CPN had taken to the streets to protest against Oli’s move. Parties including the Congress were also in protest. There was an agitation against Oli in the name of civic members.

In defence of his move, Oli also went out to hold street rallies across the country. Excerpts from Oli’s speech at those meetings were widely circulated. Especially the young ‘non-political generation’ liked his speech very much. The slogan ‘KP Oli I love you’ was even branded.

A series of criticisms and defences against Oli’s move to dissolve parliament came to a halt with a 7th March ruling by the Supreme Court. However, Oli is making headlines. Opposition groups called for his resignation. However, Oli is ready to resign, and the opposition has not been able to remove him forcibly.