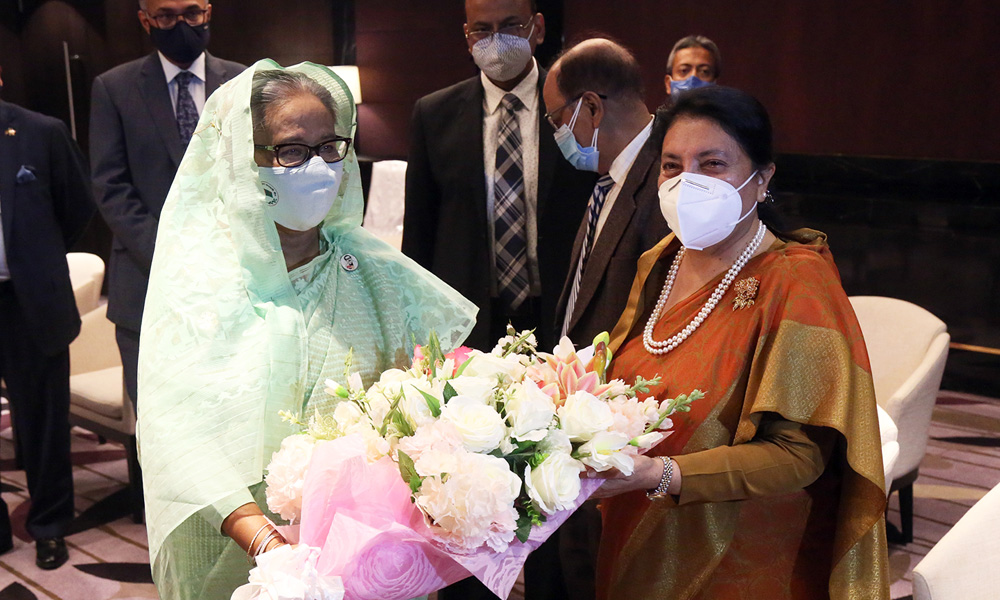 KATHMANDU: Standing in the National Parade Square in Dhaka, Bangladeshi President Abdul Hamid said, “The political mindset of the government and parties should be different, the political parties should work sincerely for nation-building.”

He made these remarks in the context of how economic development can be achieved even in the midst of political instability. While President Hamid was reciting the ‘Guru Mantra’ of Bangladeshi prosperity, his Nepali counterpart Bidhya Devi Bhandari, who was present on the stage, was also listening with interest.

Speaking at the National Parade Square, Sheikh Hasina, daughter of Bangladeshi Prime Minister and Father of the Nation Sheikh Mujibur Rahman, said economic prosperity could only be achieved through economic, transit, climate, tourism and connectivity partnerships. She has been interpreting sustainable development as a major tool for future prosperity.

Bangladesh, the youngest country in South Asia, is aiming to become an economic power on the regional radar. The development achieved by Bangladesh in the 50 years of independence is inspiring for neighbouring countries including Nepal and India.

On 26th March 1971, Bangladesh seceded from Pakistan with Indian assistance. Nepal had also provided arms to Bangladesh during the nine-month-long war for independence. Nepal is the seventh country to recognize Bangladesh after it gained independence.

Since the establishment of diplomatic relations in April 1972, Nepal and Bangladesh have always been close neighbours. In the last decade, Bangladesh has surpassed Nepal with mature economic and diplomatic development. Nepal, on the other hand, has remained where it used to be.

When it gained independence, Bangladesh was one of the poorest countries in the world. At this stage of political instability, its gross domestic product was deplorable, and the country was plagued by floods and famines. Now, however, the situation has changed. At present, Bangladesh’s economic growth rate has reached about 8 per cent.

According to the Asian Development Bank, the growth rate achieved by Bangladesh is higher than that of the average Asian country. Poverty rates are falling and Bangladesh is making attempts to bridge gaps in economic inequality.

The challenges that both Nepal and Bangladesh are facing internally and externally are similar. Apart from the evident political instability, other challenges such as earthquakes, floods, landslides, glacier eruptions, droughts and climate change are common. Both countries are confident that the still high poverty rate can be removed through regional partnership.

Most exemplary is Bangladesh’s ability to balance relations between two big neighbours, China and India. Due to mature diplomacy, relations with the two neighbours have not been as volatile in Bangladesh as they have been in Nepal.

Not only has China put Bangladesh on its diplomatic radar, but it is also running a number of charity projects there. As the Chinese influence in Bangladesh is expanding, a natural concern is seen in India and the pressure is on the South Block to stop that expansion. An editorial in The Hindustan Times, entitled “An eye on Bangladesh”, said India was in danger of losing a good neighbour and friend because of China. Such concerns are also heard from time to time in matters between Nepal. However, Bangladesh is displaying maturity in keeping its neighbours within certain limits and boundaries.

Indian Prime Minister Narendra Modi is arriving in Dhaka on Wednesday to celebrate Bangladeshi Independence Day. From there, Modi will try to send a message to the Trinamool Congress and Muslims inside India. Following Modi, Sheikh Hasina Wajed has also invited her South Asian neighbour to Dhaka for the Independence Day celebrations, and it is perceived that Bangladeshi aspirations to become a regional power are hidden within this move.

Understandings between Nepal and Bangladesh

Presidents of the two countries reached an understanding related to four issues – tourism cooperation, sanitation, cultural exchange and the Rohanpur-Singhabad railway on Monday evening. The first agreement between the two countries is cooperation in the sector of tourism.

Both countries aim to make it easier for tourists to enter Nepal from Bangladesh, for which Nepal has promised to provide air service from Saidpur to Biratnagar. Due to this, the government has tried to develop Biratnagar Airport as a regional international airport.

A Memorandum of Understanding (MoU) for cooperation from 2022 to 2025 has also been signed. This agreement will create an environment for students and cultural activists from both countries to exchange skills and knowledge. Under this, there is a plan to provide assistance from the government for students from the two countries to conduct studies on each other’s culture.

In addition, an agreement has also been reached to increase capacity in the sanitary and phytosanitary sector. The agreement will focus on conducting research and studies to detect and prevent diseases in livestock and plants.

The two countries have agreed to co-operate on additional rail routes from Rohanpur in Bangladesh to Sinhabad in West Bengal, India and on co-transit routes to trade with third countries. Such an agreement has been reached by amending the transit agreement between the two countries. At present, Nepal is using the ports of Chittagong and Mangala in Bangladesh. The port of Chittagong is very busy, and Rohanpur is a dry port.

There is an Indian railway of about 255 km from Rohanpur to Sinhabad in West Bengal and Nepal has agreed to develop it as a transit. The trilateral cooperation between Nepal-Bangladesh and India is an important aspect of this agreement and it requires Indian consent.

Foreign Minister Pradeep Kumar Gyawali, who is participating in the visit with the President, said that the bilateral discussions and partnership would add a new dimension to the economic partnership between the two countries.

“This understanding means that we have given equal priority to expanding cooperation and relations with India,” Gyawali said. “The agreement to exchange transit routes has ensured that Nepal will have ease of trade with third countries.”

Economic Diplomacy at the centre

Hiranya Lal Shrestha, a foreign affairs expert and author of the book ‘Nepal-Bangladesh Relations’, says that the relationship between Nepal and Bangladesh is based on the principle of good neighbourly relations and mutual benefits. According to him, Nepal wants to connect with Bangladesh’s railways, road network and ports, while Bangladesh wants to buy Nepal’s hydropower. It aims to import 9,000 MW of electricity from Nepal by 2040.

Foreign affairs expert Shrestha is of the opinion that it would be appropriate for Nepal to move forward by giving importance to the economic aspect, suggesting that Nepal should focus on economic diplomacy with Bangladesh.

Former Nepali Ambassador to Bangladesh Mohan Prasad Lohani says relations between the two countries have improved recently. Recalling that the initiative to open fertilizer industry in Nepal with cooperation and technical assistance during his tenure has not been completed, he said there should be cooperation in economic, energy, tourism, land and air connectivity and transit.

According to sources, the state visit to Bangladesh after 42 years has added warmth to the bilateral relations between the two countries. Shrestha said that Nepal should also cooperate with Bangladesh in terms of religious tourism.

Although Islam is the predominant religion in Bangladesh, Buddhists abound in the hilly region of Chittagong. On 27th July last year, Prime Minister Sheikh Hasina’s cabinet signed an agreement with the Lumbini Development Fund to establish a Bangladeshi architectural monastery in Lumbini, Nepal.

The state of bilateral trade

In the first eight months of the current fiscal year, Nepal has imported Rs 3.71 billion from Dhaka. During the same period, Nepal has exported Rs. 407.3 million. As a result, Nepal’s trade deficit has reached Rs 3.30 billion. Nepal has no choice but to export more goods to reduce the trade deficit.

The Bay of Bengal Initiative for Multisectoral Technical and Economic Cooperation (BIMSTEC) is headquartered in Dhaka and the South Asian Association for Regional Cooperation (SAARC) is headquartered in Kathmandu. The two countries are also members. As a result, a common platform can be developed to make SAARC and BIMSTEC dynamic under the leadership of these two countries.  Nepal can start a dialogue with Dhaka in order to develop SAARC as a partner and not an alternative to BIMSTEC.