Looking back at the pandemic 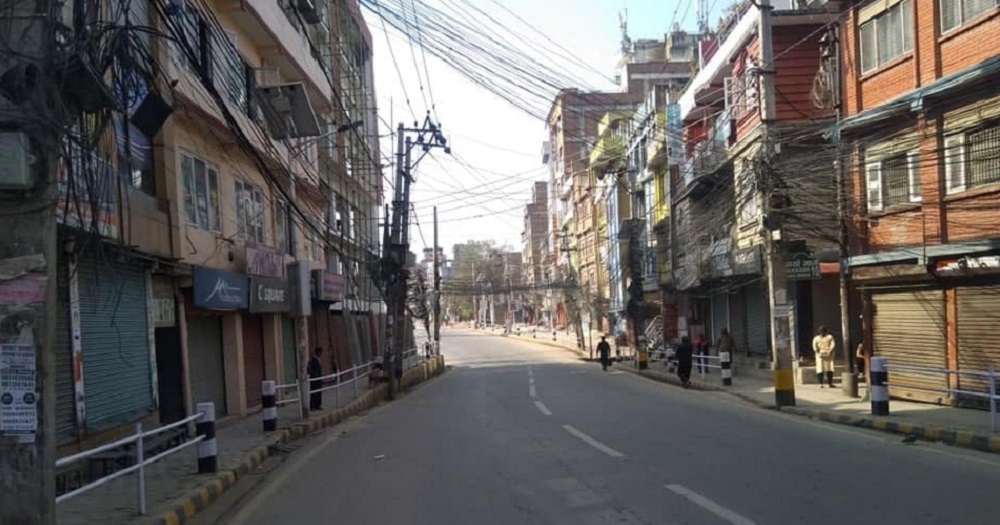 KATHMANDU: One year ago on this day, the Government of Nepal imposed a nationwide lockdown to prevent the COVID pandemic from spreading. The initial one-week lockdown order which was extended for months devastated the country’s economy.

Looking back from today’s point of view, the learning drawn from other countries has not been effective in Nepal, as it did not stop the corona pandemic. In the middle of the pandemic, the lockdown had to be lifted. Even now, amid fears of a second wave, talk of another lockdown has begun. However, the government does not want to repeat that mistake.

The first infection of COVID, which started from Wuhan of China, was seen in Nepal on 1st February. A student that had come from Wuhan tested positive for the virus in Hong Kong. At the time, the COVID infection was spreading worldwide, with various countries issuing immediate bans and restricting international travel.

Travel advisories were issued worldwide. Only rescue flights came into operation. The day after the lockdown in India, Nepal also announced it for prevention and control. After the lockdown took away their jobs, wage earners lined up and headed to their villages. Industry, businesses, transportation, banks and financial institutions all came to a standstill.

The lockdown caused a great crisis for labourers and the working class. Only vehicles carrying essential goods, ambulances and police vehicles were in operation.

Economist Dr Shankar Sharma comments that the economy has come to a standstill as COVID was made a subject of extreme terror.

“I think we gave more importance to COVID than necessary. The nine-month lockdown affected the entire economy. Its impact will have to be borne for the next few years. The government’s failure to deliver relief packages on time has had a further impact on the economy,” he said.

“We are working to reduce the impact of COVID, but I think the lockdown was imposed for longer than necessary,” said Shrestha.

The lockdown and injunctions issued by COVID filled the human psyche with the fear of death. Thus, it was natural for the economy to be affected by the panic in people’s minds.

It had been speculated that the world economy was heading in the direction of the Great Depression of the 1930s due to COVID-19. Experts have questioned the role played by China and Korea in preventing and controlling the virus.

Institutions including the World Bank, IMF, Asian Development Bank, and the United Nations seemed to be advancing their activities on the basis of health updates released by the World Health Organization. Kristilina Georgieva, Chief Executive of the IMF, said during the pandemic that they had been forced to follow the lead of the World Health Organization, even though they had led the world towards solutions to past economic crises.

A hit to the economy

The government’s extended nine months of lockdown and restrictions have shaken the very foundations of Nepal’s economy. Capital market trading also remained closed for about three months. COVID attacked the two major sectors of the Nepalese economy – tourism and aviation.

The government had presented a budget of Rs. 1532 billion for the fiscal year 2076/77. The budget had set a growth target of 8.5 per cent. However, the state of expenditure of this budget, which was affected by COVID, remained weak.

Due to COVID, the government had brought a budget of around Rs 1533 billion for the fiscal year 2076/77 with the target of 8.5 per cent economic growth, reducing the current fiscal year’s budget by about Rs 60 billion to Rs 1474 billion. This was the second time in the history of Nepal that the size of the budget was reduced, after the fiscal year 2057/58.

The government banned domestic and international flights and even vehicles to prevent and control the effects of the pandemic. The domestic flights, which were affected due to COVID, came into operation on 21st September conditionally.

Transport businessmen were agitated over the government’s ban on vehicles which claimed that the lockdown was extended as the impact of COVID was growing. After about seven months, public transport came into operation in Nepal on 5th October.

Due to the lockdown, Nepal’s tourism sector was extremely affected. Although the tourism sector contributes about 3 per cent to Nepal’s economy, the hotels, restaurants, travel and trekking and mountaineering agencies dependent on it contribute about 8%.

When the sector was affected, thousands of dependent businessmen and millions of workers in the formal and informal sectors lost their jobs. Although the sector has been fully operational recently, the hotel’s occupancy and foreign tourism have not been promoted due to the non-arrival of foreign tourists.

The government had declared 2020 as Visit Nepal Year on 31st December last year, saying it would bring in 2 million tourists by 2020. After the entry of COVID Nepal, which started in China before the start of the Visit Year, a compelling situation was created to postpone the Visit Year within three months.

Increase in Poverty and Unemployment

Most development activities were also affected as the effects of COVID started being seen in March of last year. All national pride projects including Gautam Buddha International Airport, Pokhara Regional Airport, Upper Tamakoshi and Fast Track were obstructed.

Some project workers could not be transported to the project sites from China due to international air travel restrictions, and many spare parts could not be imported. Similarly, all types of contract work done by the private sector were affected.

There are some areas where lockdown has had a positive impact on the economy. The first benefit is a reduction in imports and thus a consequent reduction in the trade deficit.

Imports of petroleum products fell sharply as transport and construction sectors were affected. Similarly, the decline in imports of construction materials and capital goods reduced the trade deficit and increased foreign exchange reserves.

The NEPSE reached a low of 1,178 points on 29th June and reached a high of 2,641 points on 28th February. The share market is believed to have risen due to the exit of Finance Minister Dr. Yubaraj Khatiwada and the reduction in interest rates of banks.

After the government announced a lockdown, there was a widespread protest against the government for not bringing relief packages for the private sector. The situation arising out of COVID was somewhat also overshadowed by the controversy within the then CPN.

The then Finance Minister had presented a budget of Rs 1474 billion, including a relief package. The budget was aimed at reducing the impact of the lockdown and fulfilling the government’s mandatory obligations.

The budget brought by the government on 29th May and the monetary policy brought by Nepal Rastra Bank on 19th July had announced relief programs. The budget announced a relief package of around Rs 150 billion for the businesses most affected by COVID and provided concessional loans.

Nepal Rastra Bank has arranged the refinancing of Rs. 200 billion through monetary policy as provided by the government in the budget for which the Ministry of Finance had prepared the working procedure and sent it to Nepal Rastra Bank.

Apart from tourism, there is a lot of activity in other sectors. Although the government’s capital expenditure has not increased, recurrent expenditure has increased. The revenue collection target is close. Trade deficits have risen again as imports of petroleum products, spare parts and construction materials have increased, while foreign exchange reserves have declined.

Demand for credit from banks is on the rise as the economy returns to normal. On the other hand, interest rates on fixed deposits have started rising due to the inability to increase deposits. There has been no reduction in remittance inflows. In a report not made public by the National Planning Commission, it is estimated that the damage done by COVID was worth 700 billion.

Former Vice-Chairman of the National Planning Commission Dr. Shankar Sharma says that it will take time to return to the old situation.

“The government has not been able to spend in the direction taken by the budget, there has been a delay in formulating the procedures for the new programs in the budget. There are still complaints from industrialists that they have not received relief. As per the government’s commitment, employment has not been created in the economy. Therefore, the government should work hard for three months and bring a budget capable of reviving the economy,” he said.

He estimates that Nepal can get back on track if it achieves economic growth of up to 10 per cent for two consecutive years.