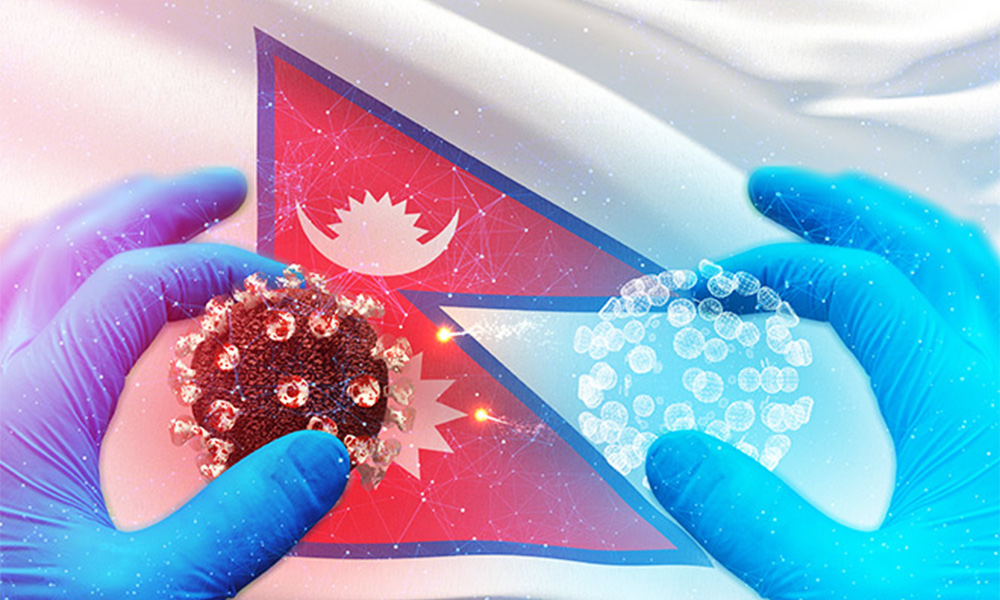 KATHMANDU: While the fear of COVID has decreased and life is gradually returning to normalcy in the country, the Ministry of Health issued a statement on Sunday urging people to take precautionary measures against the infection. This has led to suspicion among the general public on whether another lockdown is going to be imposed.

In a statement, the Ministry requested that no crowded activities be carried out across the country, social and physical distance be maintained, mandatory use of masks and handwashing with soap and water and use of sanitisers be done. Why did the Ministry remind people of the warnings that they had forgotten about? The answer is – because of the new wave of COVID that has hit India.

COVID infection rates in neighbouring India have skyrocketed in recent times, and many cities are preparing to go into lockdown as before. In India, 46,951 new infections were found in a 24-hour period on Sunday. This is the highest number seen in a single day since the beginning of 2021.

The spread of the COVID to neighbouring countries with open borders has had an impact on Nepal previously. COVID infection, which has been declining in Nepal since last January, has been gradually increasing since the beginning of April.

Looking at statistics of the last week, the rate of COVID infection has increased even though the number of tests is also less. Among daily tests of 2000-3500, approximately 100 infections are found every day. In December, the number had dropped below 50.

The doctor of Teku Hospital, Dr. Anup Bastola says that a new chapter of COVID infections has started not only in European countries but also in our neighbouring India, which could affect Nepal as well.

“Many might be wondering why restrictions might be imposed again. Ignoring the risk of coronavirus infection, it is only natural to wonder why we should be so cautious now that we have started to walk around freely. However, there is a reason for this,” he wrote on social media.

He has mentioned a recent incident on social media. “One incident that has come to notice has alerted me. About 50 people gathered at a hotel on 19th February. The gathering lasted for 5 hours. A week later, a visitor was admitted to Teku Hospital with fever, cough and respiratory problems.

He tested positive for coronavirus and had pneumonia. After five days of treatment, the man recovered and returned home. However, the shocking fact is that 19 out of those 40 people from the gathering who underwent PCR were found to be infected with the coronavirus. Of them, 7 were hospitalized.

He said it is not common for 19 out of 50 people who attended a five-hour gathering to become infected and 7 to be hospitalized. Concerns have been raised that coronavirus infections are occurring in different ways, says Bastola.

Nepalis who had gone to work in cities including Maharashtra, Gujarat and Uttar Pradesh in India started returning to Nepal after the coronavirus infections started increasing. Night curfews are being imposed in these cities. The Nepal-India border is basically wide open, currently.

Hundreds of Nepalis have been returning to Nepal from Gaddachauki of Mahendranagar, Gauriphanta of Kailali, Jamuna Naka of Banke, Krishnanagar of Kapilbastu and Belahiya Naka of Bhairahawa. On Sunday, 1800 people entered Nepal through various checkpoints and 1200 did so on Saturday.

Coronavirus has been confirmed in one person who arrived in Nepal from India. However, it has not been confirmed whether it is a virus variant (a new species of the virus). The man had only a mild fever. As there is no need to keep him in the hospital for treatment, he is in isolation under the coordination of the hospital.

The Epidemiology and Disease Control Division has started operating 14 health desks at the border as the risk may increase in the checkpoints through which Nepalis may return. It has also started screening passengers coming through various checkpoints and antigen testing is being done where necessary. Those who come from there with contact history are being sent home by explaining the quarantine rules.

Separate rules have been made for those who have come to Nepal from the UK, Germany, Brazil and other countries where the variants have been certified. Epidemiology has decided not to hospitalize everyone who has tested positive this time. You can be admitted to the hospital only after seeing symptoms. The branch claims that screening at the health desks of various checkpoints established has been made efficient.

The head of the Epidemiology and Disease Control Division (EDCD), Dr. Krishna Poudel said that hospitals near the health desk have been informed of the same.

Dr. Poudel says that a lot of internal preparations should be made at the checkpoints to prevent the second wave of coronavirus from coming to Nepal.

He says, “We are now running health desks so that Nepalis can come back from places where COVID is widespread. But there is still much work to be done.”

In coordination with the local municipalities, there is the added responsibility of increasing the scope of testing in the community, arranging quarantine and keeping the hospitals in a state of readiness, Dr. Pandey explains.

He says, “If we all work together, the pandemic can be overcome. That’s what we are preparing for.”

As India has not announced the certification of a new variant, it will not immediately close the border, Pandey explains.

“Currently, we want to increase surveillance at the border. There is no need to close it immediately. But depending on the situation, a new strategy may have to be adopted,” he said.

He said that the EDCD is mainly testing and screening people coming from there as the decision about the border is made by the upper body as per the need.

“Social distance, masks and hand washing are key to breaking the chain of coronavirus variants,” he said.

He says the new strain of the virus could spread rapidly, and the only option to defeat Nepal is a vaccine. “Only if the vaccine can be extended to as many communities as possible, it will be possible to control it,” he said.

Dr. Pun says that coronavirus cannot be controlled by imposing another lockdown.

“A lockdown is an option only if the situation becomes extremely uncontrollable,” he said. “It may be a good method through which the chain is broken, but that doesn’t mean it will be over. It might only make it somewhat easier.”

The Ministry of Health and Population has emphasized adhering to public health standards as COVID infection is on the rise again in Nepal. Joint Spokesperson of the Ministry Dr. Sameer Adhikari said that it was natural for infections to increase in Nepal after it has increased in neighbouring countries.

“What we have are public health standards of public health,” he said. “This is the conventional method of maintaining distance between each other. It is important to follow that. This is what will stay in place and in our hands even if and when newer viruses come along.”

Increasing monitoring, managing treatment, testing, arranging medicine, etc are the responsibilities of the state, according to Dr. Adhikari.

He added, “There are many types of vaccines. Some will work in some people, some will not. So the standards must be followed.”

The Joint Spokesperson also said that there are no preparations for another lockdown.