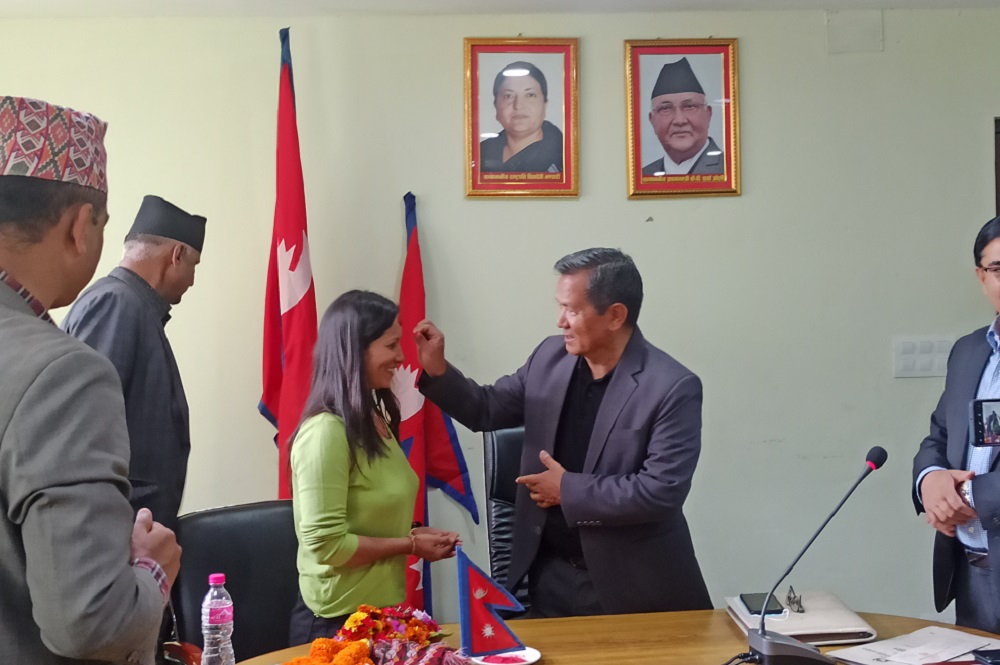 POKHARA: Photojournalism started many years ago. Her camera had captured all kinds of photos. However, she was not satisfied. She would always feel that something was missing.

On the full moon day of Gorkha Arughat around 2017, Shrestha had an opportunity to reach the Everest base camp. Arriving at the Everest base area for the first time on the occasion of the ‘Everest Marathon’, she found what was missing, She told herself ‘Ah! I am from the country of mountains, I don’t have a photo of the mountain. ‘

The photo of the mountain which was missing from the camera before was now in Shrestha’s gallery. It was not easy to get a photo of the highest peak, Mount Everest, at the base camp. Even after taking that picture, she did not feel happy.

Then she had another dream to climb Mt. Everest!

It was difficult in itself to look at Shrestha, who had never climbed a mountain in his life. Even her closest friends did not believe her. “After returning from there, I had the courage to climb Mt. Everest. Everyone who I shared my desire to do so at first laughed in the beginning,” she said, returning in 2017.

Shrestha, who grew up in Arughat, did not even know what was difficult. However, she did not care about anything else, immersed in the desire to kiss the peak. All she had to do was reach the summit of Mount Everest and take a photo.

After returning to Kathmandu from Everest Base Camp, she started seeking advice from acquaintances who had climbed the mountain before. She began to meet everyone from the guide to the businessman. Another suggestion from everyone was, ‘You should climb up to 6,000 metres first. Then you can finally climb Mt. Everest. ‘

“Everyone said you have to climb a mountain up to 6,000 meters. At that time, I chose the mountain of my own district, Manaslu, ‘she says,’ but, Manaslu was also 8 meters above. If I was going to climb any mountain, I thought why not climb a mountain in my own village? ‘

Purnima’s dream came true in the same year, that is, in 2017, she kissed the peak of Manaslu.

However, the thirst for Mount Everest did not leave her mind. She made another decision, “I will not climb any other mountain after climbing Mt. Everest.”

After the successful ascent of Manaslu, she had an eye for Mt Amadablum.

‘Amadablum is shorter than Mount Everest, but it looks very beautiful from a greater height.

In 2018, Purnima successfully climbed Mt. Everest and in 2019, she climbed the beautiful Mt. Amadablum. “It simply came to my notice then. I was not financially and physically able, ‘she says,’ To climb a mountain is not just a matter of courage. There is a lot to think about.

After successfully climbing three mountains in an interval of one year, she is now planning to climb Annapurna First” in the full moon. Her mountain journey will start on Sunday.

French climbers Maurice Herzog and Louis McKinnon first set foot on Annapurna First on June 21, 2007. The number of successful climbers is also low as it is more difficult and uncomfortable than other mountains.

“It is a more difficult mountain than any other mountain. First of all, no woman has ever set foot there. If I get back here, it will be a record. I will also be able to help my province get  recognition.”

She is about to climb Mt. Annapurna along with the Seven Summit Trek. During the ascent, she will have a team of 17 people including guide Pemba Sherpa. Their goal is to reach Annapurna in about a month.

‘Climbing a mountain also makes a big difference. On top of that, Mt.Annapurna’s is the most dangerous mountain, ‘says guide Pemba Sherpa.’ Everest and other mountains a lot of facilities. But, there is nothing here. ‘

The Gandaki state government has bid farewell to Purnima Shrestha from Pokhara on Friday with the financial assistance of Rs 800,000. Chief Minister Prithvi Subba Gurung, Minister for Physical Development Ram Sharan Basnet, Minister for Tourism Bikas Lamsal and others bade farewell while handing over the assistance.