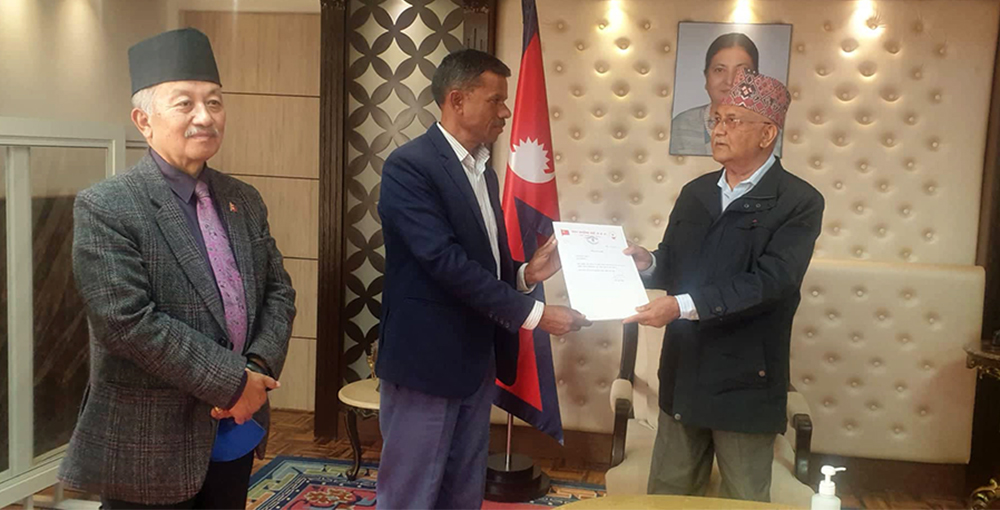 After the re-establishment of the House of Representatives, Dev Gurung was dismissed from the post of Chief Whip and Bhattarai elected from Khotang was nominated as the Chief Whip.

Prime Minister Oli today handed over the appointment letter to Bhattarai in the presence of Deputy Leader of the Parliamentary Party Subash Nemwang. Bhattarai, a twice-elected MP from Khotang, is also a CPN central member. Emerging from the politics of ANNISU , he was elected as the President of ANNISU in 2051 BS at Mahendra Ratna Campus, Tahachal.

According to the constitution, the party leader nominates a deputy leader, Chief Whip and Whip. In case the party split has not got legal recognition, the parliamentary party of the CPN  is legally the same. Chief Whip Gurung and Whip Shanta Chaudhary were from that party. Deputy leader Nemwang said that Chaudhary was still a Whip.

After the dissolution of the House of Representatives, the Prachanda-Madhav faction held a separate meeting of the party and elected Pushpa Kamal Dahal as the party’s leader. It is unknown at this time what he will do after leaving the post.

The Oli faction has been saying that Oli is the leader of the party until the party split gets legal recognition.

However, Krishna Bhakta Pokhrel, an MP from the Prachanda-Madhav faction, said that they have not thought about it now and there is a possibility of going through the parliamentary process. Out of 223 members of the CPN Federal Parliament, there are average MPs on both sides.